I On Tibb’s Eve, one of the MacDonald brothers (nobody was sure which) told the little Kerry boys that Santa Claus lived in the woods, up where Abe Leroux cut his wood. He said that was how Abe got nice things for his children when they were small, that he used to meet Santa Claus […]

On Tibb’s Eve, one of the MacDonald brothers (nobody was sure which) told the little Kerry boys that Santa Claus lived in the woods, up where Abe Leroux cut his wood. He said that was how Abe got nice things for his children when they were small, that he used to meet Santa Claus there and trade him slab wood for toys. Stan, the youngest, was suspicious, but he was only 4 years old and did what his older brothers told him. They were 5 and 7, and knew better than him.

So on Christmas Eve, the boys set out to find Santa Claus, taking the path up the hill where Abe went with his horse and sleigh. They talked about the wonderful house Santa Claus must have, the candy and oranges there would be. Stan hoped they’d see reindeer, but Sam said reindeer were only caribou.

Joe Dollimont had been cutting wood for Bowaters for ten years, but last year someone accused Joe of claiming their wood as his own. They had fought about it on the wharf, and this year Joe was cutting wood for Abe Leroux instead. All along the coast people were rebuilding after a September storm swept homes and wharves from the rocks. Abe couldn’t keep up with the demand for lumber, and was paying well for a change. Joe had no dolls to buy, no pantry to stock, and he was going to spend Christmas in the country, cutting wood for Abe’s sawmill.

Joe awoke on Christmas Eve, lit a fire and boiled the kettle. He had breakfast, then strapped on his snowshoes and slung up his small pack. He collected his axe and bucksaw, and noted that he would have to oil the sawblade that night.

When he reached the place where he was to cut that morning, he set his pack down, selected a tree and set to work. He felled it with swift, even axe strokes, dropping it right where he wanted. He limbed it, then cut it into eight foot sections with the bucksaw. By lunchtime he had cut half a cord, and he boiled his kettle and ate his lunch, watching the sky.

Joe was sawing his second log of the afternoon. The wind was picking up, shifting the trees around him so that snow fell from one tree’s branches onto those of another, a dead tree no longer able to hold the weight since Joe had cut down its supporting neighbour that morning.

Joe heard the crack and felt the descending shadow, and jumped back. The tree landed across the one he was working on, snapping the blade of the bucksaw embedded in the trunk.

Joe sat back and lit a cigarette. He could continue to work with the axe, but it would mean rough ends on the trees and Abe would claim he couldn’t get as many board feet out of them and pay him less. He would lose two days going back to the cove for a replacement, but having the bucksaw would make it up. He could drop in on a Christmas party too.

He finished his cigarette and stubbed it out in the snow. He extracted the broken bucksaw and hauled the cut wood back to the trailhead. That night he sat up for a while sharpening his axe and watching the fire in the little stove.

By the time Joe Dollimont went to bed on Christmas Eve, the three Kerry boys were very lost, and it had started to snow. Joe awoke in the night to find snow sifting in around the ill-fitting door, and got up long enough to bank the fire and wonder whether he would make it back to the cove the next day after all.

When the people gathered that night for the party, they were already worrying about the boys. It wasn’t unusual for children to wander off into the woods – that’s what it was for – but it was strange for them not to come home for supper. When the night turned snowy, the women went home to put bread and other things into bags, and the men finished their drinks and their cigarettes and put on their warm clothes.

There were dozens of trails leading out of the cove into the hills. They searched in groups of two and three, looking for tracks or broken snow where someone may have gone off the path. After an hour or so they began to return home. The snow was too heavy, and they knew how easy it was for them to get lost too.

By morning the snow had stopped, and the men again headed into the hills. Abe harnessed his horse to check his logging trails. There was no possibility of finding tracks after the snowfall, and all they could hope to do was stumble over them in the snow.

Joe got up Christmas morning and cleared the snow from around the door. He examined the sky and decided the storm was over. He put on his snowshoes and slung up his pack. Suddenly he remembered the bucksaw. He had forgotten it where he was cutting the day before. The blade might be ruined, but the saw was fine and he couldn’t leave it there.

The clearing where he had been working looked very different. The snow had been churned up and dirty, and broken branches and wood chips had covered the ground. Today there was only pristine snow and wilderness.

He started clearing away snow to find the bucksaw, beneath the dead fallen tree. When he brushed away the snow, he found that the branches that had littered the clearing the day before had been gathered and laced together along the edges of the fallen dead tree. Beneath more snow and branches, he found a small pair of boots. From the trail he could hear the sound of an approaching horse and sled.

The priest had come to the cove to say mass on Christmas Morning. The service was not long, for he had several communities to visit that day, but he stayed as long as he could. The men would return from the woods in twos and threes, have a cup of tea and head out again.

When Abe Leroux’s sled came down the lane, the curtains were pushed back from windows throughout the cove. From their kitchens, people could see Abe’s horse breathing steam in the frosty air. Sitting behind Abe was Joe Dollimont, his beard white with snow and frost. Two of the boys sat next to him with wide and quiet eyes. At his feet was a large bundle, a closed flour sack, and the sound of sleigh bells filled the air. 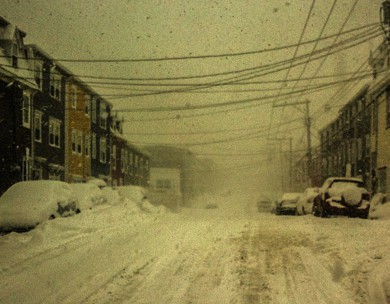 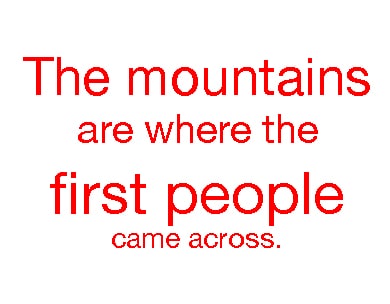