The summer held certain emptiness that year. Florence felt it in the evenings when she baked bread, and noticed more flour than normal was getting into the deepening cracks of her hands. Cindy, Florence’s niece, discovered it on the paint-chipped patio while she sunbathed. She felt the sun had a single but magnificent purpose, and when it shone the dullness of her life was overlapped by its sheer presence. As she watched the sun disappear, the feeling of emptiness recaptured her more fiercely than before.

Cindy had just turned twenty and with her natural copper hair she was quite beautiful. She judged her beauty by the interested stares from both men and women, while walking the streets of St. John’s. Their probing eyes didn’t matter much to her, although it was usually her sole interaction with people. From men it was a hopeful glimpse, a slight catching of her eyes in theirs; from women it was temporary ownership, of eyes both envious and jealous. It was all too much for her. She was submerged in beauty but it was by mere chance of some divine curator, leaving her presented to the world, as if she was hanging on a well-lit wall.

The scent of bread seeped outside and Cindy leapt up from the lawn chair. She felt stings on her backside, legs and back, from where her delicate skin was pinched by the woven plastic. She went into the back porch, and before her eyes adjusted to the dark she slipped on the canvassed floor—forgetting that she had covered her feet in tanning lotion—and cracked her toe against the door frame. Her first impulse was laughter and it sounded foreign to her ears. She found her sandals, where Florence had stacked them on the floor mat only a few hours before, and went into the kitchen upstairs where Florence had just taken out four loaves and was placing another six into the oven. Cindy watched her work for a few minutes, and could see Florence’s motions were more deliberate once she realised she was being watched. Florence began filling the sink with soapy water.

Florence emptied some of the loaves onto a cooling tray, her hands capable and never flinching against the scalding heat of the brown surfaces. She placed the bread pans carefully into the water. “I did, yes. I think I get quicker with age. Or maybe time moves faster.”

Florence turned and looked at her. “You forgot to put lotion on your neck. It’s burning up.”

Cindy touched her neck and could feel the heat resonating. “I guess I did.”

“You should rub some aloe on it.”

She started for the stairs to the washroom where the aloe was growing on a window sill. The house was quite large, and it is a shared joke between Florence and Cindy as to what will happen when Florence is unable to climb stairs and will have to get every room brought to her. Cindy was happy to joke about such worrisome matters and Florence knew it. Even though Florence often reminded Cindy not to worry about life when one is still young, Cindy’s nerves became rattled at night time and she would lie awake in bed overnight, listening to Florence while she dusted every room of the house, even the unused bedrooms where she still changed the sheets weekly. Cindy was unable to ask her about her nightly habits, but she would at times walk to the bathroom and listen, and Florence would not make a sound until she believed Cindy was once again asleep.

Cindy climbed the stairs and walked the short corridor to the bathroom and bedrooms. Sunlight beamed in through the large bathroom window and all of the surfaces and objects within shone brightly. In the corner was a small wash stand on which was laid out a men’s shaving kit, all polished and set in the precise order of a shrine. The smell of bread was in the bathroom too, while she followed Florence’s instructions. Outside the window two men walked by, and she overheard a little of their conversation. The excited baritone of their voices made her happy and left her mulling, like the exaggerated wonderment of a tourist. In the midst of her reveries, she looked at the shaving kit again in its spotless and unmoved state, in which it will remain until the next dusting, and felt an immense heat flash on her face. She suddenly held a small waste basket with one hand and used the other hand to push in all of the pieces; a straight razor, a safety razor, a small circular mirror, a badger brush, and the powdered soap, all taken into the basket with one smooth sweep of her arm. Remaining was the pristine surface of the wash stand. She then sat on the edge of the bathtub staring at the waste basket, and her hands darted for it again but she restrained herself. It was done.

Her nerves soon settled and she found herself unable to let go of this new feeling that had now possessed her fully. She went back downstairs, walked through the living room where the old family photographs were set precisely on the wall for a walk-by viewing like a museum. She felt her arms motion to remove the photos but the smell took over again. She went quietly into the kitchen.

Florence looked at her. “Feel better?”

Cindy stared at the bread.

Florence’s hands stopped moving, and her face poised. “Do what? What is it dear?”

“They’ve been gone for three years.”

“But we still live with them.”

Florence dried her hands with a cup towel, and walked off to the living room and then slowly upstairs. Cindy could hear her walk to the bathroom and after a minute her hands rooting around in the garbage can. Cindy walked to the back porch again, where her sandals were once again tucked neatly off to the side with soap bubbles dripping on the floor. She opened the door to the basement and went downstairs to the garage where the smell of wood, dirt and gasoline from the lawn mower was all she could smell. She looked around where everything was left in its disorder for years. She sat on a work bench, strewn with tools and woodchips, and almost started to give in but the electric buzz from the deepfreeze stopped her. She walked to the deepfreeze, the radiating coldness hitting her legs and feet. She opened the lid and was greeted by loaves of bread. 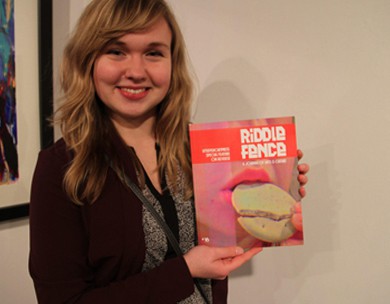 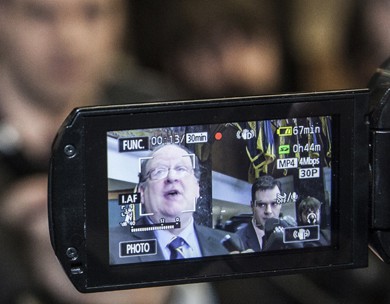