Alien invaders all around us

A look at alien species invading our province

With warm weather nearly upon us (really, for real this time), St. John’s seems to be blooming. Lawns are luscious, the city-planted daffodils are delightful, and the leaves are even looking likely. So too, the Japanese Knotweed, which by now should be a familiar sight, is springing up from cracks all over the city.

Japanese Knotweed is on the International Union for Conservation of Nature’s 100 worst invasive species list, and with good reason. The stalks grow out of underground systems (rhizomes, if you must know) which can spread more than 10 meters — making the plants devilishly hard to kill.

Not only are the plants hard to kill, but they are also so well suited to almost every environment (bogs excluded) that Japanese Knotweed consistently out-competes native flora, which is why it’s such a successful invasive species.

According to Todd Boland, Research Horticulturist at the Memorial University Botanical Garden, the test is simple. If a non-native species out-competes the native ones, it’s invasive.

Moose were introduced to Newfoundland on purpose, but that doesn’t change the fact that they are negatively affecting the local population. Not only are they dangerous on the roads, but moose are “impacting the regeneration of newly regenerated forest,” says Boland.

Karyn Butler, who teaches biogeography at Memorial University, agrees that ecosystems are always changing, but points out the unnatural nature of most invasive species. “A lot of it comes down to human error,” she says.

Some of the worst invasive plants were first introduced as ornamentals.

“When [water hyacinth] was introduced, as an ornamental, it went berserk,” she says, “because it really likes a new environment and there was this opportunity for it to invade… it’s the classic rabbits into Australia problem.”

Other species are introduced for sport. Brown trout have taken hold in a big way, often accompanying the displacement of native brook trout. Anglers might not be complaining, but it is a cause for concern.

Provincially, Newfoundland is doing pretty well, much better than British Columbia when it comes to the level of invasion, but along with PEI it’s also one of the last provinces to establish an official Invasive Alien Species Council.

One is, however, in the works. The proposal is in, but funding was interrupted by the federal election early this month. Boland hopes that it will be established sometime this summer. The council will serve primarily as a resource for interested citizens.

That’s no cause for calm however. According to Butler, people said that purple loosestrife (a lovely invader that has been running rampant in the Northeastern United states for almost 200 years) would never make it to Newfoundland.

“They said it would never grow in Newfoundland because it’s too cold in the summer, but there’s plenty of it around here. It invades, it invades, and it out-competes other things.”

One reason Newfoundland might be doing better than some of it’s mainland counterparts is that here, the invasion happened early.

“A lot of our herbaceous vegetation has an origin that is not North American,” says Butler. “Its origin is European, because that’s the way our settlement came.

Which leads us to our last invasive species. It came from Europe. It disrupted local ecosystems. It out-competed other species. And it is in danger of causing complete environmental collapse. Any guesses?

Bad Baby
All babies cry and all babies poop and nurturing human life is not easy … are all babies bad? 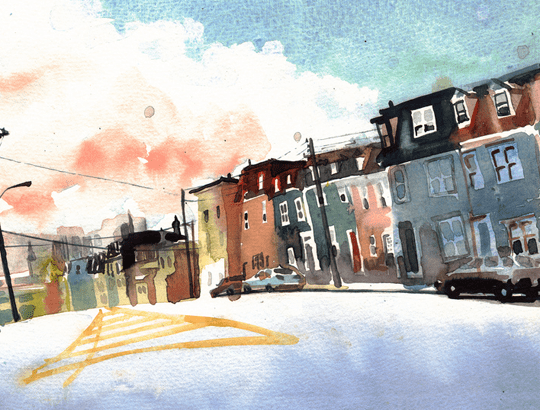