Province, federal government and Nalcor all have a hand in the incarceration of the Inuk grandmother and land protector, says Amnesty spokesperson.

Amnesty International Canada says it is investigating the incarceration of Beatrice Hunter, the Inuk grandmother and land protector who has spent nine days behind bars after refusing to promise a Supreme Court N.L. judge that she would not go near the Muskrat Falls site in Central Labrador.

On Tuesday Craig Benjamin, Amnesty’s Campaigner for the Human Rights of Indigenous Peoples, told The Independent he has written to the Government of Newfoundland and Labrador asking for an explanation of the situation and for the province to lay out its options moving forward in dealing with Hunter’s incarceration, which has begun to spark ire across Canada.

Though the internationally respected human rights organization hasn’t issued an official statement, Benjamin said certain conclusions can be drawn from the current situation and the six-year history of Indigenous resistance to Muskrat Falls.

Benjamin noted the “very actions” for which Hunter and others are being brought before the courts were actions that were “responding to the failure of the province and the federal government to uphold their obligations.”

Looking back at the process through which Muskrat Falls was sanctioned, and then developed against the will of local Indigenous communities, he said “from a human rights perspective it was quite clear to us that the province and the federal government had really failed in their obligations to protect the health of downstream Inuit communities.

“In relation to their very particular obligation to the rights of Indigenous people the process was profoundly flawed up to the point of the protests last year for not addressing people’s concerns.”

When Premier Dwight Ball called an emergency meeting with Indigenous leaders last October in the midst of an occupation of the Muskrat Falls site led by Innu and Inuit land protectors, Benjamin said the meeting and subsequent agreement marked “an implicit acknowledgement…that in fact they needed that reminder, that wake-up call from the grassroots, in order to bring them back to their obligations.”

Benjamin said Canada and the provinces have a constitutional obligation to protect Indigenous people and communities from the kind of harm residents of Labrador have been saying for years Muskrat Falls will inflict on their communities.

“Treaty rights, whether it’s treaties of past centuries or recently-negotiated treaties, and more broadly the right of Indigenous Peoples to maintain their culture and identity, and the right to health — we feel that’s all part of [Canada’s] constitutional promise, and becomes therefore part of the highest law of the land.”

In March Mi’kmaq lawyer and Chair in Indigenous Governance at Ryerson University Pam Palmater told The Independent that when law enforcement arrest and charge Indigenous land defenders, as they have with upward of 60 in Labrador related to the Muskrat Falls protests, “they’re not respecting Section 35 [of the Constitution Act, 1982] and the right of people to protect their land and territories.

“We have the right to protect our lands from destruction,” she said. “In fact, the Supreme Court of Canada said in Delgamuukw [v. British Columbia] that Indigenous lands cannot be used in a way that’s inconsistent with how [Indigenous Peoples] always held them.”

Though the federal and provincial governments have not fulfilled their promises to implement the calls to action outlined in the 2015 Truth and Reconciliation Commission (TRC) final report, they still have an obligation to adhere to their promises, including respecting the articles of the United Nations Declaration on the Rights of Indigenous Peoples (UNDRIP), Benjamin added.

Last year a peer-reviewed scientific study led by researchers at Harvard University projected that once flooded the Muskrat Falls reservoir would lead to concentrations of methylmercury in fish and other wild foods unsafe for human consumption.

Benjamin also said the Muskrat Falls controversy resembles others in Canada where corporations have greater access to the courts in protecting their rights than do Indigenous Peoples.

He said the 2007 Ipperwash Inquiry revealed a “bias against Indigenous Peoples at the injunction level, where it’s so much easier for corporations or crown corporations to show potential damage in a way the lower court can understand it.”

Corporations, he said, “can make claims about millions of dollars at risk [and] there’s a fairly low standard of proof required for the harm they’re claiming. It’s concrete, it’s clear, it’s well understood.

“On the other side,” he continued, “when Indigenous Peoples see governments or corporations taking action that threatens the imminent destruction of a sacred site, of activities that contribute to a traditional way of life, the impacts on future generations, the courts have proven really resistant to implementing an injunction. They say those are deep, complex long-term issues, we’ll throw those back on government to negotiate and in the meantime the project will proceed because we understand the dollars at risk.

“At the end of the day you have a fundamental discrimination that’s created, where the court system is more responsive to the claims of economic impact on society as a whole, than it is to respond to protecting the rights of those who are really most at need.”

Innu, Inuit and settler Labradorians have argued for years that Muskrat Falls threatens their traditional food supply in Lake Melville and will leave people living with anxiety about what they say is an unstable geology around the dam site that could lead to fatalities in the event of a dam breach.

Nalcor and the government have repeatedly told those living downstream they are safe, though residents say they are not satisfied with the quality of evidence provided.

On May 17 the entire community of Mud Lake was evacuated due to what locals call unprecedented levels of flooding. This year marked the first spring break-up since the Muskrat Falls spillway came online. Nalcor immediately dismissed claims their facilities had anything to do with the floods, but later backed off from abdicating responsibility entirely.

Hunter told The Independent in her first interview from Her Majesty’s Penitentiary in St. John’s that the Mud Lake flood was a major part of her impetus to go back to the Muskrat Falls main gate on May 22 to protest, and subsequently, when summonsed to court, to refuse to promise Supreme Court Justice George Murphy that she would stay away from the Muskrat Falls site.

Government must change the conversation

Provincial Justice Minister Andrew Parsons and Premier Ball have said on multiple occasions since Hunter’s incarceration on May 29 that they cannot intervene in matters before the courts.

But Benjamin said “even in a circumstance where the key decisions are in the hands of an independent prosecutor and in the hands of the judiciary,” governments still have a “responsibility to contribute to a public understanding, a public discussion that is cognizant of the complexity of the issues and that does not feed into a reductionist discussion that ultimately ends up being biased against Indigenous people.”

He said politicians have a “tendency to respond to actions like a land occupation or a blockade in a really simplistic, decontextualized way that says, well that’s breaking the law.

“We need to step back and ask, what was the intent? Was it malicious? Was it to cause harm, to destroy property? Or was it an attempt to uphold rights, to uphold aspects of the law that elected leaders had failed on?

“We look at situations like this, and it is clear that people don’t take actions like these lightly — they do so out of a genuine commitment to underlying rights issues, and they’re driven to do so by the failure of our elected leadership.

“There’s a basic principle that when freedom of speech or freedom of assembly are at risk, you want to use criminal prosecution only when it’s absolutely necessary, only as a last resort, and you very strictly avoid any form of sanction or punishment that is out of proportion to the public interest, or that would have the effect of stifling protest or dissent in the future,” Benjamin continued.

“That’s a basic principle across the board — but you apply that to a context of people whose voices have been excluded, where the government itself has demonstrated that it needs that reminder to be held accountable to the law itself, and it seems to me that the imperative to take an incredibly cautious approach on prosecution is doubled.”

Benjamin said the Ipperwash Inquiry also laid out the “responsibility of politicians to contribute to a positive, informed, rights-based conversation, and not to in any way further inflame the conversation.”

He said Amnesty International “feels there is a need for the province to take this moment to clearly affirm some underlying principles of the importance of dissent,” and to move beyond “this simplified and ultimately biased description [of the conflict] that makes trespass laws more important to protect and uphold than our constitution.”

As Amnesty awaits a response from the province on possible ways to move forward, it’s clear that “surely, to have [Hunter] held under such harsh conditions—in terms of being held in an institution that is not intended for somebody who is at worst being convicted of a non-violent and extremely minor offence, that takes her so far from her home community—there have to at the very least be far better alternatives for dealing with this situation,” he continued.

“When you have individuals motivated by conscience, motivated to defend rights that we as a society have committed to uphold…I think there’s an obligation not to escalate things into the criminal sphere, into a sphere of punishment, but to proceed on the basis of respect and say, even if the province disagrees, we disagree but we respect your motivations. Can we not move forward on some basis that is not about treating you like a criminal?”

He said the province and Nalcor “have to take responsibility for their role in contributing to this [situation] in the first place.”

Correction: An earlier version of this story stated the Mud Lake flood happened on May 22. The flooding occurred on May 17, and May 22 marked the day Beatrice Hunter returned to the Muskrat Falls main gate to protest. 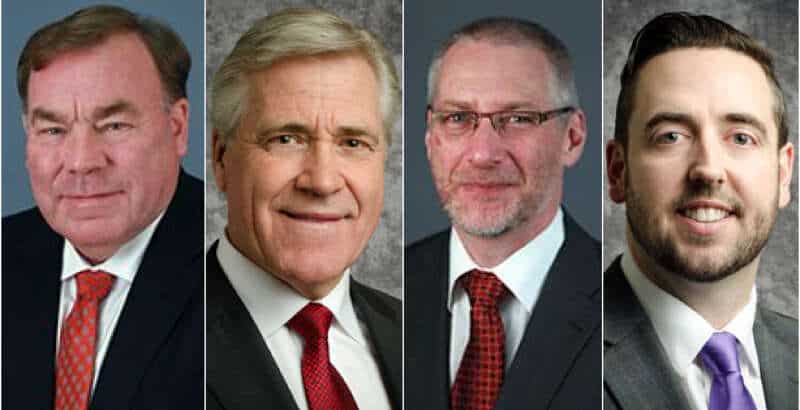 Colonialism in the justice system: Who’s to blame?
When it comes to Inuk land protector Beatrice Hunter's shameful treatment, everyone is trying to pass the buck -- including those who bear ultimate responsibility. 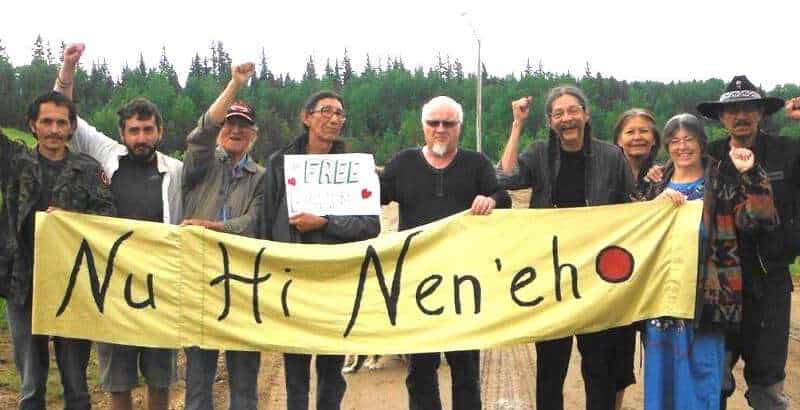 Support growing for Beatrice Hunter
Protests in Happy Valley-Goose Bay, St. John’s, Rigolet and Ottawa cap off a week of calls from across Canada for the release of incarcerated Inuk…