Twenty years ago, the phrase “Newfoundland music” might not have evoked thoughts of salsa, rumba, and Afro-beat.

But that’s been rapidly changing, thanks to a growing core of musicians from around the globe who are hard at work building a world music scene in Newfoundland and Labrador.

“It’s music that’s not actually found here, it’s a kind of music that we brought in, and once we brought it in, it’s up to them how to receive it…”

At the heart of this scene is Jeik Kalunga Loksa. Originally from Angola, he first rose to fame in the 1960s when he founded the Kenya-based ‘Air Fiesta Matata’ band. For over a decade Air Fiesta Matata toured the world, winning musical awards from Africa to the UK, playing shows from Hong Kong to Thailand, dining with African presidents and steadily topping African and international music charts. Air Fiesta Matata eventually split up, and for the past decade Jeik has made St. John’s his home. Here, he organized the band Mopaya, comprised of a mixture of African and Newfoundland-born musicians.

Mopaya is more of a musical phenomenon than a band. The stage will be crowded with anywhere from a half-dozen to a dozen performers at any one time, and between sets Jeik eagerly invites anyone who’s interested to contact him and learn how to sing and play with Mopaya. The music itself is unique, ranging from reggae to hip-hop to R&B to funk to traditional African dance music. The only thing consistent about the band is the crowded dancefloors they generate wherever they play.

Last year, one of Jeik’s bandmates – Alix Jackson, originally from Congo – started a new musical project in St. John’s titled Xpress Musica. Currently an 8-person outfit comprised of musicians from Newfoundland, Congo, Angola and Eritrea (but all living in St. John’s) the band started playing shows late last year. Alix contacted Jeik – who was residing on the mainland at the time – and Jeik happily returned to make music with him in St. John’s. On Saturday, Mopaya and Xpress Musica performed a show together at the Ship Inn, and we had the opportunity to catch up with Jeik and Alix for a few words between sets.

“Xpress Musica is an idea I came up with back in 2007,” explains Alix, who’s lived in Newfoundland since 2002. “I had friends and we wanted to bring something to the province, something that people would enjoy.”

“We have a lot of fun,” booms Jeik in his deep, laughter-filled voice. “Now that we have Xpress Musica, and Mopaya, we want to rock this city. It’s our province so we have to rock it up.”

Jeik is pleased to have made St. John’s his home. “I’ve been here for the past 12 years,” he reflects. “It never changes. We play different provinces of Canada, but Newfoundland…it’s in my blood. I’m a Newfie.”

However, like many Newfoundlanders Jeik was spending some time in Toronto when he first heard about Alix’s plans for Xpress Musica. All it took was a phone call to bring him home.

“We invite everybody, anyone who is willing to come, and learn how to play this music…”

“Alix called me, and since we have a shortage of musicians here, we try to use the musicians we have to bring joy to this province. So when Alix got in touch with everybody, we jumped in a train and…now we’re making Xpress Musica! It’s going to be fantastic, the same as Mopaya. We invite everybody, anyone who is willing to come, and learn how to play this music…”

“We need to have support from Newfoundlanders,” Alix pipes up. “Newfoundlanders are our people, and we need to work together. They are the ones who support us, who give us all the hands they can. We need them to show up and enjoy what we are offering. It’s music that’s not actually found here, it’s a kind of music that we brought in, and once we brought it in, it’s up to them how to receive it…it’s for them to come and chill with us.” 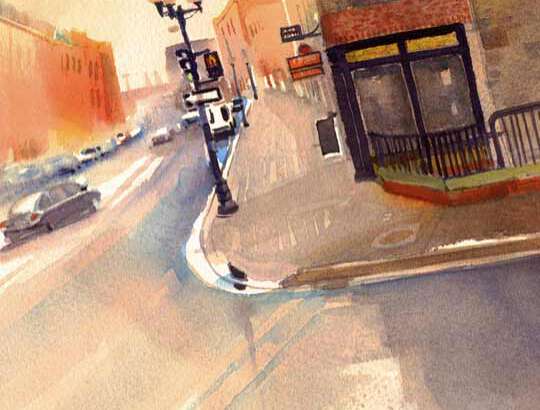 A man with land
Farmer Mark Wilson finds land to farm, outside the watershed