In the lead-up to his second-ever Island visit, Canadian folk songwriter Hayden Desser is interviewed by Newfoundland musician Jon Janes.

On the heels of his latest album, Us Alone, acclaimed Canadian songwriter Hayden Desser will make his second ever visit to Newfoundland when he performs Wednesday in St. John’s.

The Independent asked Pasadena-born folk musician Jon Janes (a.k.a. The Mountains and The Trees) to interview Hayden, who Janes cites as one of his primary musical influences.

Here’s how the conversation went…

Jon Janes: So last time was your first time in Newfoundland; it looks like you enjoyed yourself so much you’re coming back?

Hayden Desser: Even though sometimes making it there, even on an east coast tour, is a bit of a logistic, I push for it.

J: Newfoundlanders appreciate it! We all know what a logistic nightmare it can be getting here. Last time you played the LSPU Hall, a theatre, solo. This time you’re playing the Rock House, more of a band-oriented venue. What can we expect this time around?

H: I changed many aspects of what I do this time around and one thing sort of happened by accident. I was scheduled to work with the guys from Cuff the Duke again, live, and just through last minute scheduling issues we weren’t able to do it. So I put a new band together of guys I didn’t really know very well. So it’s two guys, Jay McCarrol and Taylor Knox, and myself, and it’s been going really well; it’s been fun and having a three-piece has been really interesting for me.

J: A lot of your songs sound very autobiographical and also really relatable to a wide audience. How much of your material is truth and how much is artistic licence?

H: I enjoy coming up with the seed of a song that’s usually something that’s a truth in my life or someone around me, but part of the fun is changing things around, making up endings, or, if I’m the protagonist, me doing something at the end I wish I had done in real life. I really enjoy that part of it. A lot of people listen to my stuff and think I’m Mr. Confessional but that’s not the case all the time. There are definitely some songs that are completely raw and honest.

H: There’s no hiding behind that one.

J: Your albums are some of my favourite to put on and listen to the entire album, start to finish; I feel like they’re a complete package.

H: Good. I do obsess over the full listen when I’m working on a record. I never know if I accomplish making it something that’s an enjoyable thing but I know that’s not a focus on a lot of artists minds these days…

H: …It’s becoming that way again. Although, let’s face it – a lot of the artists I really respect do still live in the past that way.

J: This is your first album since Skyscraper National Park that you’ve released on a label not your own. Now that you’re working with Arts & Crafts, how does that affect Hardwood Records?

H: It’s still a thing but it’s a bit on hold right now. Arts & Crafts is part of, this time around, wanting to try a few new things. I’ve been doing the exact same thing on several albums and I just felt, maybe, I should see what would happen if I did this or I did that, so that’s basically what that’s about.

J: I’ve noticed your touring schedule has been sparse these past few years. Why is that?

H: You know, let’s face it, I haven’t been a touring machine over the last 18 years. Generally I do two to four tours and I get somehow annoyed and my first instinct is, “Maybe I’ll just make a new record.” The next thing I know two years have gone by and I’m still working on it. This time there was a little more time than usual; family-related.

J: What was your recording process for Us Alone, and how is it similar or different to past albums?

H: It was different from the last record because the last record was very unique to what I’ve done over the years. I had a few songs left over from In Field & Town and right after I finished touring that record I decided that if I didn’t do something with those, they would sit on a shelf. So I recorded with my friend Howie Beck as producer and we sifted through what was around and made a record that way, mostly at his studio. That was an anomaly in itself. For this one I was excited to go back to my slow, methodical, bizarro method, which is to have all of my instruments mic’d at all times, ready to go with sounds that I’ve slowly found to be pleasing to my ear, and I just start writing and recording at the same time. I usually record a song while I’m still writing and structuring it; that’s the way I work. I often mix the song at the same time when I’m recording it.

J: You’ve had some great guests on your albums over the years, such as Julie Doiron and Afie Jurvanen (Bahamas). When I first heard Us Alone, there was a huge discussion between my friends and I who the female vocalist on Blurry Nights was. Turns out it was Lou Cannon. Can you tell us a bit about your sister-in-law Lou?

H: I love her voice; it has a unique character to it. It’s such a casual thing with Lou because she’s basically over all the time, hanging out at the house. She’ll come over for dinner and between dinner and dessert I’ll be like, “You want to come up and just sing for 10 minutes?” Then she nails it and we continue our meal. That’s the scenario. The strange thing about that song is that I originally was singing the whole thing and I think either my wife or Lou suggested it be a duet. I changed some words around to make it make sense and we went from there. I’m happy about that.

J: Last time you played LSPU Hall you performed Damn This Feeling and talked about how you had recorded several different ways, from rock band to string quartet, and ended-up using a live single-take version on the album. Was there a lot of that with this album, or are the versions we hear recorded the only ones that exist?

H: There were a few, such as Almost Everything. I did a whole version to a drum loop and at some point in time I realized there was something not quite right with the groove, which is unfortunate because I loved the sound of all the instruments and it had this really great thing about it, but I just couldn’t live with the way it was. So I got Taylor, my drummer, to come in and we performed the basic tracks live and it just suddenly moved way better. I basically threw out, for me, two or three weeks of recording. There’s decisions like that all around whether it’s doing something again from scratch or taking everything you’ve recorded on top of the original piano take away and saying, “This is how the song is meant to be.”

J: Are there any artists you’re excited about and would like to talk about?

H: I’d say, of contemporary artists that are making records today, and even though they’re friends of mine, The National continue to blow my mind. There’s so many elements of what they’re doing that I love and there’s so much depth there. I’m definitely not shy of saying they’re my favourite band.

Hayden performs at The Rock House in St. John’s on Wednesday, June 5 at 10 p.m., with special guest Lou Canon. Tickets are $25 in advance and $30 at the door. For more information visit Hayden’s website.

“To resist for the sake of a single tree”
From the centre of Istanbul's protests this week, Hans Rollmann reports on the rising of a powerful social movement and the violent state terror it… 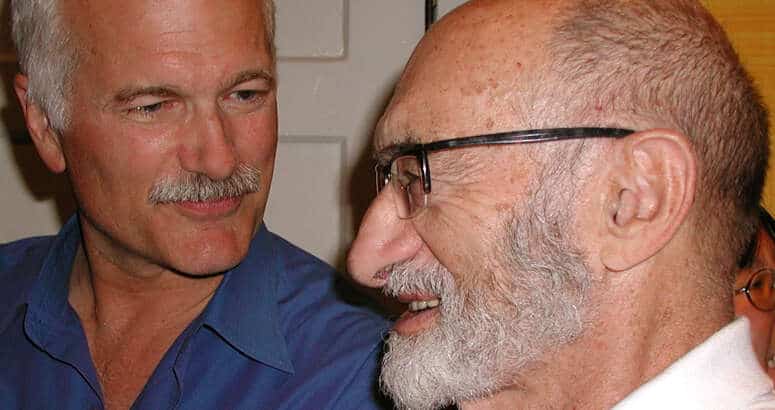 Requiem for a great Canadian
Henry Morgentaler was a rare Canadian hero of democracy, justice and human rights.