The Moment that Joined John Crosbie, the Cod, and Us

The 1992 Cod Moratorium was the toughest political decision of Crosbie’s career. The Independent remembers the man, the moment, and the decision﻿.

“Are you a Newfoundlander or is Ottawa more important?” a man in the crowd in Bay Bulls on July 1, 1992, asks John Crosbie, then federal fisheries minister. It’s the day before Crosbie and the federal government would call a moratorium on cod—a decision meant to last two years but continues today.

It was Canada Day, so while most Canadians were enjoying summer barbeques and other festivities with family and friends, throngs of disgruntled fishers, plant workers, and community members, men, women and children, gathered down on the wharf in Bay Bulls, Newfoundland. They were riled up about the life-changing decision they knew was imminent.

Crosbie’s reaction to the confrontation that day in Bay Bulls is best summed up by the man himself. “My philosophy is attack is the best form of defence,” Crosbie told CBC news in 2012. By then he was Newfoundland and Labrador’s Lieutenant Governor.

Crosbie didn’t back down that July 1 day—it wasn’t his style. He was about to make what he would later call the most difficult decision of his career. By then, northern cod had reached abysmal numbers—and fisheries scientists, bureaucrats, and politicians could see no other option.

The cod collapse didn’t happen overnight. And it was not an act of God. It was a man-made catastrophe that started long-before the moratorium decision came down on July 2, 1992. By the early 1950s, there were an estimated 500 trawlers fishing the Grand Banks. Ten years later, that number ballooned to 1,000—and many of these trawlers were among the largest on the planet. Fisheries scientists Jeffrey Hutchings and Ransom Myers hypothesized more cod were taken from the Northwest Atlantic in the fifteen-year period between 1960-75 than the 250-year span between 1500-1750.

But perhaps even more difficult for Crosbie to reconcile than the cod collapse were the layoffs that would ensue from the federal government’s decision. The cod moratorium remains the largest industrial mass layoff in Canadian history. The thirty to forty thousand Newfoundlanders and Labradorians who were put out of work (the majority fishers, but about one-third fish or plant workers) was the equivalent of seven hundred thousand from the Ontario workforce at that time.

The decision to upset an entire industry was arguably a first step toward rebuilding the fishery. But two decades later in the same interview for CBC, Crosbie was questioning why more tough actions had not followed his own.

“Now it’s not just off Canada, every country in the world is equally guilty,” Crosbie told CBC, arguing the world had not learned its lesson from northern cod and had continued rampant overfishing on virtually all shores across the planet. Further, he argued: “we could do something more, but we’re not.”

He was right—and we’re still not, but there is promise. The Terms of Union, the 1949 agreement governing Newfoundland’s relationship to Canada, granted the federal government responsibility for the “[p]rotection and encouragement of fisheries.” And yet, only now does federal fisheries legislation make accommodation for species recovery. Even so, there’s no such cod recovery plan. How is this the case, when the collapse of northern cod remains the greatest numerical reduction of a species in Canadian history? Every marine species is below its historical level of abundance—recovery planning is needed now more than ever.

The fishery today is contending with unprecedented challenges. In the foreword to Wade Kearley’s 2012 book Here’s the Catch—The Fish We Harvest From The Northwest Atlantic, fisheries scientist, George A. Rose, argued the trifecta of issues includes the ghost effects of poor past management, continued overfishing and climate change. And yet the fishery also remains a major provincial economic driver, earning three times more today (accounting for inflation) than before the moratorium. A particularly bright light, from a sustainability perspective, are small-scale fisheries, which are showing it is possible to focus on value over volume and return to practices like handlining over gillnets.

Today, as many provincial economies teeter dangerously on “boom or bust” economics—relying too heavily on a single industry or resource—lessons from the cod moratorium, especially our failure to act on the call, offers insights to learn from our mistakes.

The following is an exclusive excerpt from the book Cod Collapse: The Rise and Fall of Newfoundland’s Saltwater Cowboys (2019, Nimbus Publishing), remembering that time and the man who wore the decision.

Today, no one would question John Crosbie’s allegiance to his home province of Newfoundland and Labrador. He dedicated his career to the public service and spent his life here.

By the time I was twelve, the supper-hour news was dominated by outport fishers and plant workers. They appeared out of sorts, cursing and swearing, their rage honing the edges of their accents, making it nearly impossible for mainlanders to appreciate much of what they had to say. “Six generations down the line, passed down and he’s done nothing but S-H-I-T to it,” shouts one fisher featured in a July 2, 1992, video clip from CBC’s The National. Only now do I appreciate the weight of those words. The cod fishery was wiped out that day and with it, the traditional trade of generations. The he the fisher is referencing is then federal fisheries minister John Crosbie. The scene is the news conference where Crosbie formally announces the moratorium on cod fishing.

By then, the days of holding Pop’s hand and hearing his saltwater cowboy stories were history. The image of fishers that became the new norm—out of place on the nightly news instead of in their element aboard a fishing schooner—didn’t jive with what I knew, even at twelve. What I wouldn’t have given to have climbed into Pop’s yellow-and-green dory and set out along the shores of Fortune Bay with him. We’d look back and squint to make out the saltbox houses and fishing sheds dotting the land, camouflaged in all that glistens. Even in summer, the cold winds would bite, while the waves would make for a bouncy ride, splattering salty seawater for tasting on licked lips. It was the kind of off-the-beaten-path experience that drew me to Little Bay East time and time again. Growing up in Corner Brook, the fisheries news coverage was all that more intangible. I was no longer a bayman in one of the affected outports, nor was I a townie where the seat of government resided, in St. John’s. Instead, I was learning terms that painted a particularly unflattering picture of folks from the bay. Terms like baywop (the outport equivalent of redneck) or comments that fishers were on the pogey or the dole (collecting employment insurance), all insinuated they were less-thans.

Television cameras that July day captured the scene of more than a dozen fishers shouting at those on the other side of the double doors, inside the formal news conference, to “get out of the way.” Angry fishers in ball caps, nylon jackets, and patterned sweaters prepare to storm the room. A few of them collectively ram the doors with their shoulders— once, twice, three times—before the camera cuts to its next scene. Inside, men in suits erect a barricade, lodging a chair’s legs into the handles of the double doors. The pseudo-blockade turns out to be as futile as the fishers’ arguments that day. Now inside the room, there’s finger-pointing and more shouting, but one prevailing theory looms large: there are too many fishers fishing too few fish and there have been for some time now.

“I’m making a decision based on the desire to ensure that the northern cod survives as a species,” says Crosbie, seated at a table at the front of the room, his elbows bent and hands clasped below his chin. He’s wearing his square-rimmed glasses and a grey suit, his wavy white hair combed neatly into place. Two other white men in grey suits are seated beside Crosbie. Behind them are a dark curtain and the Canadian and Newfoundland flags—a distasteful display of patriotism if ever there was one.

That spectacular series of events was foreshadowed by the even more spectacular events of the day before. On July 1, Crosbie had taken a press trip to Bay Bulls, about thirty kilometres south of St. John’s. There waiting for him were throngs of disgruntled fishers, plant workers, men, women, and even some of their children. “Are you a Newfoundlander or is Ottawa more important?” one man in the crowd calmly asks as Crosbie leans in, listening to him with his right ear. The crowd clamours all around, barely granting the politician room to walk. Crosbie, never one to back down from confrontation, gives it right back to the gatherers.

“There’s no need to abuse me,” Crosbie says, directing at another man.

“I’m not abusing you,” the man replies, his voice elevated as he defends himself from the accusation. Crosbie seems out of place here, but firmly stands his ground. He’s taller than most and wearing his Ottawa uniform: a navy wool coat over a dark suit, white shirt, and tie. By comparison, the man he’s addressing, either a fisher or a plant worker, is sporting a bright blue nylon jacket, round-rimmed glasses, a moustache, and a navy ball cap resting on top of his mullet. The situation is getting increasingly heated and Crosbie isn’t having it.

“Why are you yelling at me? I didn’t take the fish from the goddamn water, so don’t go abusing me,” Crosbie replies in his raised voice. It’s the line that will go down in history.

“Well, who took it then?” someone’s voice can be heard off-screen, as the crowd erupts into taunts and jeers. They’re not having any of it either.

“I’m trying to do what I can to help,” Crosbie contends, feigning calm and turning to walk away.

Excerpted from Cod Collapse: The Rise and Fall of Newfoundland’s Saltwater Cowboys. ©2019 Nimbus Publishing. Reprinted with permission of the publisher.

Photo: Lt. Governor John Crosbie gives the Speech from the Throne, March 2011. Photo by the Independent. 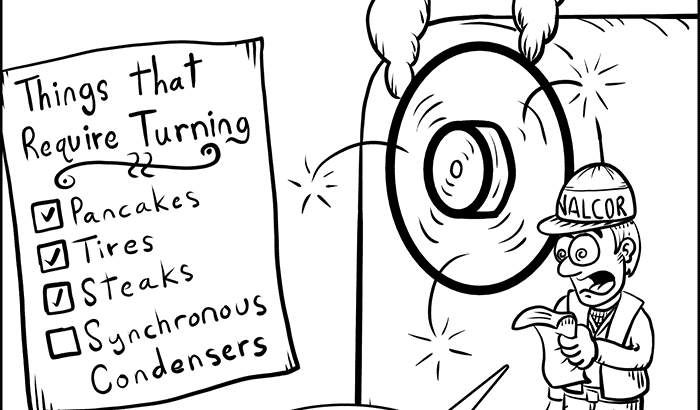 Indy Inks (8 January 2020)
NEWFOUNDLAND AND LABRADOR, for your crimes of NOT DOING MUSKRAT FALLS PROPERLY AT ALL, we sentence you to fulfill MURPHY'S LAW for all eternity, apparently.

A Glimpse Inside: A Day at Her Majesty’s Penitentiary
Advocates say a replacement for Her Majesty's Penitentiary—dating to 1859—will improve safety for both inmates & officers. But how much longer can it wait?