The Province has documented oil leaks in the Gulf of St. Lawrence since asking the federal government for $1 million to stop the pollution four years ago.

Anger is mounting over the provincial government’s failure to stop oil leaking into the Gulf of St. Lawrence from abandoned oil wells on the Port au Port Peninsula.

A national environmental organization, a Mi’kmaw First Nation councillor, a prominent seabird biologist and the provincial NDP are among those criticizing the Liberals’ decision to pursue $1 million in funding from the federal government rather than paying to stop the seepage of oil into the Gulf of St. Lawrence from the century-old oil wells on Shoal Point.

Bill Montevecchi, a research bird biologist with Memorial University, says he’s “concerned about seabirds in the area,” namely the Black-legged Kittiwakes and Herring Gulls that “nest on the cliffs and coasts of the Port au Port Peninsula and forage in the area including the waters near Shoal Point.” Montevecchi says the birds “are surface-feeders and are highly vulnerable to oil slicks.”

He’s also concerned for Northern Gannets from the Magdalen Islands, which “often feed in the area” for herring and mackerel, he says. “Oil and seabirds don’t mesh well.”

The provincial Department of Environment and Climate Change says there was no indication of harm to seabirds during a recent visit to the site, but that “seabirds fall under federal jurisdiction.”

Last week The Independent reported that four years have passed since the Liberals first asked the federal government for the funds to permanently decommission three legacy oil wells on Shoal Point, where they have leaked an estimated one litre of oil every hour into Port au Port Bay. Over that same time, the province has monitored the wells—though not as frequently as a commissioned report recommended—and noted that oil continues to seep into the ocean.

Jasen Benwah, the Port au Port councillor for Qalipu Mi’kmaq First Nation, calls the situation “totally unacceptable” and says the wells “need to be secured permanently.” He says the province should pay the cost and worry about trying to recover the money from the federal government afterward.

“Oil is actively polluting our ecosystems,” provincial NDP leader Alison Coffin said in a written statement to The Independent. “Federal and provincial governments know what must be done, but neither will pay the $1 million required to do it. However, they had no problem handing out hundreds of millions of dollars in oil subsidies and licenses for new oil exploration. This is unacceptable and people are outraged.”

In June the province announced more than $500 million in financial assistance to the oil companies that operate the Terra Nova offshore platform in an effort to extend the project’s life.

Gretchen Fitzgerald, the Sierra Club of Canada’s Atlantic director, says that “continuing to allow this oil to spill is a total abdication of the responsibility to protect fish and fisheries, and validates what we already know about the Canadian and the provincial government: even as they continue to pay out hundreds of millions of public dollars to the oil and gas industry in Newfoundland—and billions across the country—they turn their backs on the risks we will all share now and into future.”

“As with climate change and other oil spills, the public is yet again left holding the bag for the consequences of unchecked pollution,” she says.

Little is known about the origins of the three wells, which are estimated to have been drilled in the late 1800s or early 1900s. They are within eyesight of one another in a tidal zone on Shoal Point, a small peninsula under which oil has historically been known to exist. Most recently it was part of a licensed area where junior oil companies hoped to drill from land out under the seabed using the controversial method of hydraulic fracturing to access oil. That pursuit was met with significant grassroots resistance from residents of the Island’s west coast, prompting the government to commission a review of fracking in the province and to place a moratorium on the practice.

Critics say the Liberals’ refusal to stop the oil leaks in an effort to save $1 million by having the feds foot the bill is an indication of both governments’ inadequate concern for the environment.

“Even in an inland sea of international ecological, economic, and heritage significance such as the Gulf of St. Lawrence, Canada’s leadership is shockingly lacking,” says Fitzgerald, who thinks the federal government “needs to take leadership and commit to a tight timeline to stop the spill and consult with affected coastal communities on restoration.”

“Cleanup and ecological restoration such as this can be part of a bigger package to help Newfoundland and Labrador transition away from fossil fuels and create real jobs of the future.”

Wells may be part of a jurisdictional dispute

In 2015 then-provincial Environment Minister Dan Crummell told The Independent the province would take “a lead role” in remediating the site, but that the federal government is also “going to have to play a role.”

Crummell said Newfoundland and Labrador is “responsible as a province [for] any pollution that happens on land,” and that the federal government is “responsible for anything that’s at high water mark.” He added that the province and feds “work closely together on these types of issues,” but said he was “not concerned” about whose responsibility it is.

“I’m concerned about—this is a problem, let’s find out what’s going on, let’s find a way to remediate this problem,” he said.

The Canada-Newfoundland and Labrador Offshore Petroleum Board (C-NLOPB), a joint federal-provincial body that promotes and regulates the province’s offshore oil industry, confirmed that it is involved in three-way dialogue with the province and Canada.

“Due to the proximity of the aforementioned wells to the Offshore Area, the status of these wells remains a regular topic of discussion between the C-NLOPB and both levels of government,” Lesley Rideout, a spokesperson for the board, said in a written statement. “We are aware that the Government of Newfoundland and Labrador is working with Natural Resources Canada on a long term solution.”

For its part, Natural Resources Canada (NRCan) considers the wells at Shoal Point to be onshore, which means they “fall under provincial jurisdiction,” a spokesperson explained in an email.

Asked whose jurisdiction the provincial government believes the wells fall under, a spokesperson for IET said “the department is offering no further comment.”

Coffin says the leaking wells represent a “failure in environmental stewardship” on the provincial government’s part.

“What other literal messes is this government leaving in their wake for the youth of this province? It’s not fair to our young people. They are very concerned for their future and the province they are set to inherit.” 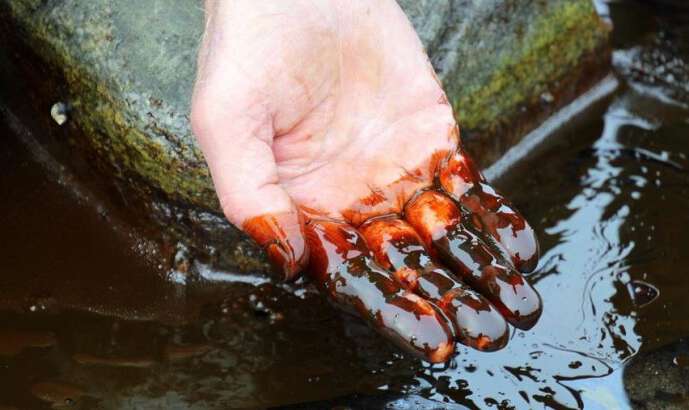