There’s a lot to be cynical about in light of the way politics is done these days. But, just before voters head to the polls in Newfoundland and Labrador’s 2015 general election, a new party has emerged to offer some words of encouragement and let us know there may be a fourth option in 2019.

You won’t see their party name or any candidates on the ballot when you vote in Monday’s election, but the Pitcher Party of NL has made its presence known and plans to have a conversation about the state of politics in this province and how politics can be done better.

On Thursday the first tweet from @PitcherPartyNL appeared on Twitter, saying “Imagine if politicians could serve the people without being [sic] belittling each other. #BetterLeadership #cdnpoli #nlpoli”

And then, throughout the day, other tweets appeared, featuring images with simple but insightful thoughts about political issues. On Friday morning the Pitcher Party of NL Twitter account was alive again, live tweeting during the VOCM leaders’ forum.

Its Twitter bio reads, “Grassroots political party in NL, bringing logic and compassion to provincial politics. Thoughts and dialogue for a better future.”

The party even built its own website, featuring nothing more than four party principles. There’s also a feature to submit your email address and have a party representative contact you with more information — so I did.

I was promptly contacted by a person named Carol McDonald, who told me the idea to form an “alternative” political party in Newfoundland and Labrador began “between about 10 friends around the same time Tom Marshall became interim premier [January 2014], and there was much negativity swirling in the political dialogue. The group has grown since then, as more and more people have expressed a desire for a more positive and civilized breed of leadership.”

McDonald responded to a few questions by email, but insisted the answers are “on behalf of the party, not my own.”

Either way, they may provide some valuable insight to voters heading to the polls on Monday. Here you go:

Interview with Carol McDonald of the Pitcher Party of NL

JUSTIN BRAKE: What is the Pitcher Party of NL, what’s the significance of its name, and when and why was it formed?

CAROL McDONALD: The Pitcher Party of NL derives its name and colours from the Pitcher Plant, a provincial symbol and an icon of perseverance under harsh conditions. Initial conversations of building the party began some time ago, but it finally came to fruition during the 2015 provincial election campaign. Though we weren’t able to register in time to put candidates on the ballot this time around, we will continue to have conversations with the electorate and build momentum into 2019. Many voters shared their observation that the political race had taken a very negative tone. We heard over and over again that people felt candidates were not giving strong reasons to vote for them, but rather focusing their message on why not to vote for their opponent. This results in a government with which the people begrudgingly accept as the lesser of the evils. We think Newfoundland and Labrador deserve better. We think the people deserve a government they can be proud of, with messages they can get excited about. The Pitcher Party was formed to fill this need and champion positive, collaborative agendas in government.

JB: Your website does not list specific policies that you support, but rather four principles: respect, long-term decision-making, balance and cooperation. Can you explain why you are promoting these four principles and elaborate on them? Also, can you give some examples of where the three main parties are doing well or falling short in these respects?

CM: The Pitcher Party is in its infancy, and the nuances of our specific polices are still being articulated by our members. The party does, however, promote four overarching principles. The first is respect. Specifically, respect for diverse ideas and differing opinions. We have a beautiful province with beautiful people from a wide range of backgrounds, and we do ourselves an injustice if we select only a narrow spectrum of those ideas which resemble our own.

We have a beautiful province with beautiful people from a wide range of backgrounds, and we do ourselves an injustice if we select only a narrow spectrum of those ideas which resemble our own.

The second principle is long-term decision making. Our electoral system runs on a four-year cycle, but that doesn’t mean we should only make decisions that yield fruit within four years or less. Short sighted government that focuses solely on re-election is doomed pass the consequences of their errors on to the next generation. We are seeing that today when weak environmental laws allow for the immediate gratification of oil revenues. We see it when the immediate gratification of a budget surplus outweighs the desperate need for a new Waterford Hospital and the replacement of HMP. We see it when harm reduction strategies are snubbed due to up-front cost, without regard for the long term cost savings we’ll see in acute health care.

Thirdly, we believe in balance. While spending and investing in people is important, we must do so with prudent management of our financial resources. We would like to see conversations around sustainable programs and policies, rather than the cycle of spend-and-cut we have seen in the past.

And finally, we believe in cooperation. We want to see politicians of different colours cooperating, working together, sharing ideas to solve problems. While critiquing and questioning are vital parts of a healthy opposition, far too often we see politicians tear apart good ideas simply because their own party hadn’t thought of it first. Instead, let’s take good ideas, talk about them together, and make them great ideas.

JB: What are some questions you think voters, particularly those who are undecided about who to vote for, should ask themselves before going to the polls on Monday?

CM: Undecided voters need to ask themselves, “Who do I trust?”. At the end of the day, each party brings some good ideas to the table. But if we don’t trust them to carry it out, their plans are of little value.

JB: Newfoundland and Labrador has the lowest youth (18-25) voter turnout among Canadian provinces. Why do you think young should people vote, and what could the parties be doing to encourage higher youth voter turnout?

CM: Young people should absolutely vote, and vote with such excitement. They have an opportunity to shape their world in such a significant way. The decisions that are made by government impact young people the longest, so it’s important that they voice their concerns and hold their representatives accountable. But we hear from young people that voting is intimidating. They feel disconnected and disinterested with the candidates. Parties must make themselves available to young people and show them concrete examples of how they can make a difference. Imagine if we could create a culture where young people looked forward to being old enough to vote with the same enthusiasm they do with applying for their drivers license!

JB: What should the incoming government immediately do once it is sworn in?

CM: The immediate priority of the incoming government must be to earn the trust of the people. People are very skeptical of government lately, and certain legislation hasn’t helped that. Even if there’s nothing to hide, the mere appearance of secrecy makes people uncomfortable. The government must display humble transparency and invite public discourse.

JB: Is there anything else you’d like to say to voters?

CM: The final thing we’d like to say to voters: Celebrate and encourage our democracy. Regardless of the outcome of the election, realize that the men and women who put their name on the ballot are trying to make the province a better place.

The cost of living simply
Homesteading sounds like a wonderful lifestyle, but it is also utterly unattainable for many in Newfoundland and Labrador who are working low-wage jobs and lack… 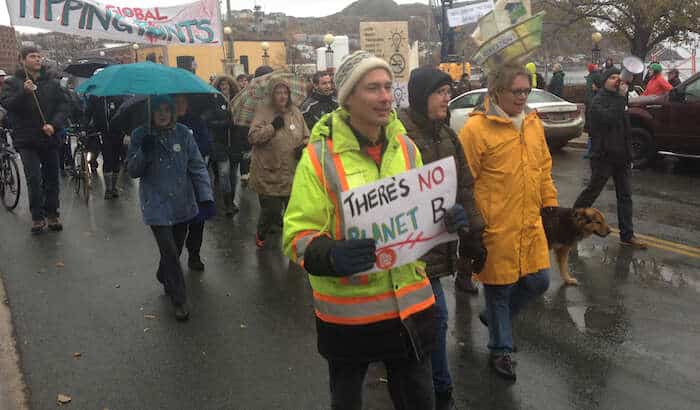 St. John’s joins global #ClimateMarch ahead of COP21
As the global climate talks get underway in Paris, people in St. John's and across Canada are demanding climate justice.