But the five-man hydraulic fracturing review panel released a report Tuesday that makes it very difficult for the oil industry and government to introduce the highly controversial method of fossil fuel extraction into this province.

In front of a packed community hall in Port au Port East Tuesday evening Chair Ray Gosine and two other members of the Newfoundland and Labrador Hydraulic Fracturing Review Panel shared the highlights of the panel’s final report, which took a year and a half to complete and has resulted in a recommendation that government maintain its “pause” in accepting applications from oil companies looking to frack for fossil fuels in the Green Point Shale Formation that runs along the Island’s west coast.

The report states the potential financial benefits of fracking would not likely be a “game changer” for the province’s fiscal position, it outlines 85 supplementary recommendations for government if it wishes to further consider the possibility of hydraulic fracturing, and it emphasizes the necessity of public support in any areas that would be affected by the activity.

“Without a better understanding of the science of the geological formations of commercial interest…it will not be possible to successfully address the challenges or to realize the opportunities of unconventional oil and gas development,” Gosine told the 150 or so in attendance at the community hall, reading from the panel’s final report.

“So within the context of western Newfoundland, if the costs and technological barriers are too high, development won’t happen. If support of public policy and regional economic development frameworks and a robust regulatory regime are not implemented, we feel it shouldn’t be permitted anyway. And then if the science of the geological formation continues to be poorly understood, the technical risks will be unacceptably high.”

Gosine concluded his 45-minute presentation by saying while shale resources that “might be present” in western Newfoundland “represent both opportunities and challenges for industrial development and economic growth in the region,” and while the panel has spent “a fair amount of time trying to understand them, it’s clear that they need much more consideration than anybody has given them to date.”

Addressing the crowd after Gosine’s presentation, Kippens resident Graham Oliver, a retired school teacher and active member of the local anti-fracking movement, said the report contains what he called 11 “showstoppers” — or reasons that “give the government a perfect opportunity to call a legislated moratorium [on fracking] because it’s going to take an incredible amount of money just to go through and to do all the things that [the panel] has recommended.

“It’s going to take an incredibly long time” to implement the recommendations, Oliver said, “and to do that government will be better to invest in alternative energy because the fossil fuel industry in years to come is going to be running into difficulties.”

The report lays out a hypothetical scenario for oil development via fracking on the Port au Port Peninsula that is based on the “best estimates today for the amount of oil that’s out in the two licensed areas in Port au Port Bay,” Gosine said, explaining under the panel’s scenario approximately 150,000,000 barrels could be recovered.

He said the estimated revenues the provincial government could generate from the development over a 26 year project period would be between $2.2 billion and $3.5 billion, or between $84-136 million per year.

“Our conclusion is that the provincial revenues, while they might be [important] if they’re directed in some particularly creative way to the region affected, certainly couldn’t be considered a game-changer economically for the province,” Gosine added. “So it’s not a strategic energy source for us in meeting our needs, and it’s not like oil and gas is in a broader sense important to the province.”

Gosine pointed out that while oil and gas currently comprises about 25-30 percent of the province’s gross domestic product (GDP), the percentage of GDP that would be associated with the fracking scenario outlined by the panel “would be two or three percent, just to put it in perspective. It’s a small part of the province’s oil and gas activity,” he said.

“I’m suggesting we won’t be doing this at all”: Mi’kmaq Chief

The panel also devoted significant time and consideration in its report to discussing the concept of social license, and while it questioned some of the ideas of what constitutes sufficient public support for fracking, it ultimately concluded that “a significant majority must be in support of this kind of industry going ahead,” Gosine said, generating applause from those in attendance.

In an interview with The Independent last June, then-Opposition leader Dwight Ball said a Liberal government would not proceed with fracking in the province without a social license from the people of Western Newfoundland, including the Mi’kmaq.

Qalipu Mi’kmaq First Nation Chief Brendan Mitchell, who has been vocal in his opposition to fracking in western Newfoundland, stood to thank the panel for its work but took aim at a suggestion in the report that fracking could be economically viable if world oil prices rose to a certain level.

“Your report indicated that at $45 U.S. a barrel this is an economically senseless project. The other thing you commented on in your report was that at $85 U.S. maybe we could look at doing this.

“I’m suggesting that we won’t be doing this at all,” he said.

Mitchell said a survey of more than 700 Qalipu members revealed 84 percent were “dead against fracking”. He criticized the report’s failure to account for socioeconomic impacts like property value and deterrence of migration to the area from outside the region and province.

Muise said he doesn’t feel hydraulically fracturing shale formations anywhere in Newfoundland will ever be safe.

“I worked with geologists for 26 years, and this scares the hell out of me,” he said. “Not only for me, but for my children and my great grandchildren. They’re going to get the effect of it.”

Bennett criticized the government’s failure to ensure fishers, Indigenous Peoples, women and residents of western Newfoundland were represented on the panel, and asked rhetorically if the findings outlined in the final report might have been different had the panel included other members.

Citing the Supreme Court’s landmark 2004’s ruling in the Tsilhqot’in Nation case that declared Aboriginal title, Bennett also criticized the panel for failing to adequately consider and include in its report the government’s duty to consult the Mi’kmaq people of western Newfoundland.

“I believe it’s the government’s responsibility to uphold the Supreme Court ruling, and that could have been addressed as part of the report had an Aboriginal person been on the [panel],” he said.

“It’s from that heart that I want to say that…I think the report, or the recommendation, might be a bit soft. A pause maybe isn’t what we were looking for. I want to say that my Gros Morne is [all of] Newfoundland, it isn’t just a National Park,” he said, referring to the panel’s recommendation that a buffer zone be created around Gros Morne National Park to protect the UNESCO Heritage Site from oil development.

“I believe that there’s no part of this land or this water that isn’t as important or more important than the other, and I believe that that consideration and the outcry of the people that spoke up against this — in fact that stopped this process three years ago and brought us to where we are now — with that spirit and that heart fracking will never take place in this province.”

The report devotes a section to climate change and recommends that in light of the province’s commitment in its 2011 Climate Action Plan and the federal government’s recent commitment in Paris to limit global warming to 2 degrees Celcius, the province must undertake a thorough assessment of the greenhouse gas (GHG) emissions associated with unconventional fossil fuel development in Western Newfoundland.

“Careful consideration must be given to the results of this assessment and to the impact of development on the province’s aspirations with respect to GHG emissions,” the report reads.

Critics of hydraulic fracturing have repeatedly pointed to studies that claim most or all orphaned fracking wells fail over time and leak methane—one of the most potent GHGs—into the atmosphere. Locally, residents in Port au Port Bay have pointed to the oil leaking into the ocean at Shoal Point as an example of what happens when oil wells are abandoned by private companies and left in the hands of the government; residents and the government are forced to monitor wellbores indefinitely and remediate any problems, often at very high costs economically and environmentally.

In recent years scientists have said that any oil spills in the Gulf of St. Lawrence, which includes the waters off Western Newfoundland, would be devastating to the already threatened sensitive ecosystem which serves as spawning grounds or migration routes for endangered species like the blue whale.

First Nation leaders, environmental groups and residents and communities from all provinces bordering the Gulf have been speaking out against fracking and offshore oil development in and around the Gulf, arguing an oil spill or continued chronic pollution from industrial activities threaten the provinces’ fisheries and tourism industries.

On Wednesday the Scottish Parliament voted to ban fracking in their country, a decision that came days after the Government of New Brunswick announced it was extending its ban on fracking indefinitely.

A growing number of political jurisdictions in North America and around the world are banning fracking, which has been shown to pose significant risks to drinking water and air quality, to cause earthquakes, and to contribute to climate change, among other things.

Natural Resources Minister Siobhan Coady responded to the report and said the government will continue its policy to not accept applications for fracking and review the report and its recommendations.

“Any future decisions regarding the hydraulic fracturing industry will be based on scientific evidence, and most importantly, on a social license from the Newfoundlanders and Labradorians who may be affected,” she said.

Responding to the report, the Council of Canadians, one of the country’s most active groups against fracking, issued a statement saying the report only strengthens the case for a complete ban on hydraulic fracturing in this province.

“The people of Newfoundland and Labrador clearly communicated to the panel that we don’t want fracking anywhere in our province,” Ken Kavanagh said in a news release Tuesday. “It’s time for our government to listen. Let’s follow in the footsteps of New Brunswick and Nova Scotia by banning fracking.”

“The report gives lip service to the environmental and human health risks that the NDP and many others described in submissions to the panel,” he said. “It also gives lip service to the threat to local fisheries and tourism in the area. But the real bottom line for the panel seems to be that fracking would not currently be economically viable. The market shouldn’t dictate whether or not this practice goes ahead sometime in the future. Our magnificent natural environment on the west coast of the province should not be jeopardized as soon as the price of oil goes up high enough to warrant production.”

Time to take the Leap
"Canadians believe that Canada and the provinces can become world leaders in addressing climate change." 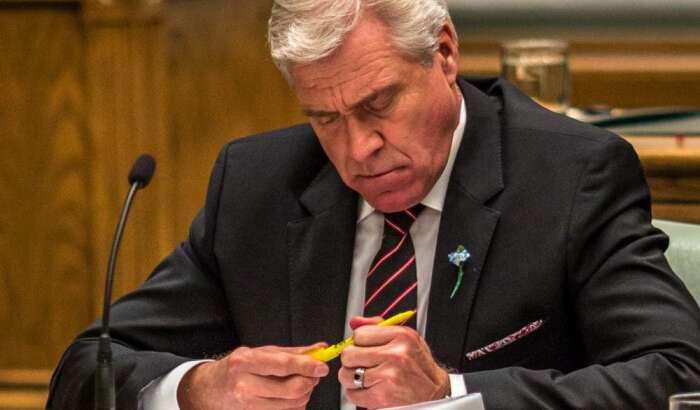 If you can’t lead, then get out
The Nalcor scandal is just the tip of the iceberg.