Mormon Missionaries Find St. John’s a Rock in the Storm

Given the situation in America, the families of the young missionaries are more relieved than worried that they can’t get back to the United States.

The square space of couch behind me has been arranged to resemble a tidy workspace, and for the first time in nearly two weeks I’ve put on a collared shirt. On the other side of the screen Martinez looks more comfortable in his shirt and tie, along with the three other similarly dressed young men in a workspace of their own; one which looks considerably more natural than my hastily-assembled office.

“I remember we were sitting on the couch like, this is super boring— what do we do?” Martinez laughs. “And so we just did trick-shot videos, trying to pass the time.”

As Newfoundland and Labrador enters another month under a state of temporary lockdown due to the COVID-19 pandemic, this group of young Mormons thousands of kilometres from home have tried to make the best of the same difficult situation.

Cole Bates is from Ladera Ranch, in the South of Orange County, California. Along with the three others from Washington State, Idaho, and Alberta, Bates and his companions are members of a Christian restorationist church, whose congregation are often referred to as Mormons by those outside of the church.

“[Mormons] is kind of like a nickname, because of the Book of Mormon,” Bates says. “The real name of the Church is: ‘The Church of Jesus Christ of Latter-day Saints’. I know that’s kind of long— it’s kind of a mouthful.”

At the age of eighteen or nineteen, church-members often have the opportunity to travel and proselytize, going great distances to spread the word of their faith. Bates and the others came to Newfoundland after volunteering to serve, and following prayer and revelation their church leaders assigned them to the Canada-Montreal mission, which has recently grown to include Newfoundland and Labrador.

Bates, who speaks French, spent nearly a year and a half in Quebec before being moved to St. John’s.

“Our purpose is to invite others to come unto Christ, and so we teach people about Jesus Christ,” Bates says. “That’s why we’re here.”

While Bates arrived in late February, just before the COVID-19 outbreak started to take hold in North America, Garret Martinez and Carson Scott arrived just before January’s ‘Snowmaggedon’ and subsequent state of emergency.

“It was awesome,” says Scott. “Honestly it was really cool, like I’m from Calgary, I know what the cold is like, but I’d never experienced snow like that— it was incredible.”

While the monumental snowfall prevented them from going door-to-door as they might have usually done, they were able to help give back to the community by grabbing some shovels and offering their assistance to those in need, digging people out for nearly four weeks straight.

“That’s all we did. And it was super cool because we were just offering service to people.”

Now it’s not metres of snow which are preventing them from reaching the community, but the looming fear of the COVID-19 virus which has already infected over two-hundred people across the province. The same technology which has allowed us to chat from across town, however, has also helped them to reach out and continue their mission.

Making use of social media and applications like Zoom, they’ve moved away from door-knocking and are instead reaching and engaging with people digitally.

“For us we’re pretty normal people,” says Martinez. “Like I have lots friends with Instagram and Snapchat, I know people’s parents who use it, we’re a little different than Amish people— we all use technology; we’ve got Netflix, we’ve got YouTube.”

While it might be the first thing that many people think of when they imagine missionaries in their neighbourhood, Bates says that the idea of being constrained to only knocking on doors is pretty old-school, and something the church is slowly moving away from.

Bates himself is no fan of getting his door knocked on, and so he tries to look for other ways to engage with people who want to hear their message; working through social media has been a big help for them so far.

“We do a lot of teaching like how we’re talking now [over video call]—we actually hold a little service on Sundays over Zoom and study the scripture together.”

Despite the help of technology, he admits that there’s still something missing when communicating exclusively over a screen, and says that nothing can truly replace getting to know people through face-to-face conversation.

“It’s the difference between me and you not sitting in person right now— like, if I saw you on the street I don’t know if I’d necessarily see you and go, oh hey, that’s that guy I talked to,” Bates points out. “But if we were in person we’d know each other a little bit better. So that’s the biggest cut-off I’ve been seeing.”

A Rock in the Storm

As the pandemic continues to spread across North America, the United States has taken extreme measures to curb new infections, including shutting down flights and closing the border with Canada. Given the difference in the number of cases between the two countries, the families of the young missionaries are more relieved than worried that they can’t get back to the United States.

Martinez, whose family is living in Washington State, says they’re relieved that he’s here in Newfoundland,

“It’s a lot worse over there than it is here right now.”

In the meantime, Bates says that in addition to using more of the church’s technical facilities to continue their work, they’ve also been allowed to be in greater contact with home amidst the pandemic, using the same technology that’s helped them reach out to a new community here.

“We’re able to call and talk to our families, and with the whole COVID-19 thing you can then communicate and talk to your family twice a week.”

Bates’ own mother has COPD, an existing lung condition which puts her at even greater risk for the lung-attacking COVID-19 virus, and says that the ability to keep in touch with her has been very important.

“She’s been super, super on lockdown and being really careful, so talking to her and being able to brighten up her day while she’s been inside has meant a lot.”

“Family is obviously something that is super important,” Bates says, “you’ve got to make sure that everyone’s doing okay and being able to check in on my family and having them talk to me has been really nice.”

Asked if they had gotten to see much of the island before the shutdown, the four excitedly rattled off some of their favourite locations, including Cape Spear and getting fish-and-chips at Chafe’s Landing. While they’re not too worried about the borders being closed, they are disappointed that their missions are being cut short. Martinez, who had been serving in Corner Brook before being moved to St. John’s, was due to return to his native Washington in mid-August, but will now be returning in May if travel restrictions are lifted.

“I want to be able to serve here a little bit longer and I’m only really going to get one chance at to be out here as long as I have,” says Martinez, “but I know that it’s not really up to me, and the more that I’m sad about it, the more that I’m just going to be sad about something and not find something else to do.”

Despite their tumultuous time in the province and a shortened mission, the four are still looking forward to seeing Bell Island if they can, and hope to return someday for a vacation. In the meantime, they’ve been able to keep entertained and active with the help of the church’s basketball gym, and even perfect a few new recipes.

“We’re all good friends so that helps a lot,” Says Bates. “We have fun with each other and we’ve gotten pretty good at cooking lately— we made enchiladas last night!”

Conor McCann is a freelance writer and journalist from St. John's, NL, now based in Melbourne, Australia. After graduating from Memorial University, McCann worked on-air with VOCM News before leaving radio to pursue print media. His work has appeared in publications including Vice, the Maritime Edit, and CBC. 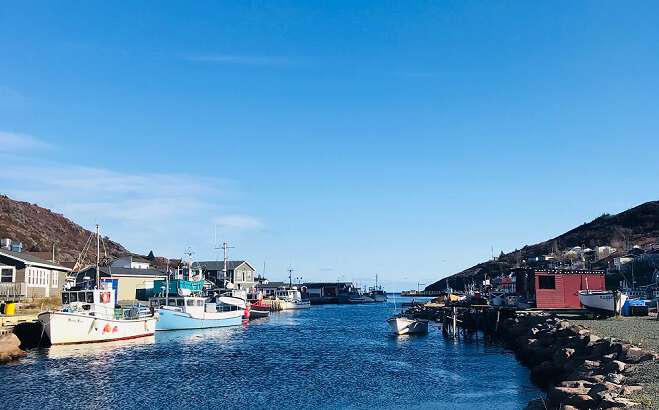 COMMENTARY: How and Why We Fish (Part 2)
Our current food crisis compels us to ask: what would it take to feed the province with fresh, local cod instead of global markets?

Notes from the Rafters: 13 April 2020
They have added video. Each councillor now comes to the meeting framed by a hastily curated slice of their natural environment.