Sarah Ramey’s brooding songwriting, filtered through her personal blend of sophisticated and seasoned regret, charmed me on first listen. By the time I’d learned more about her story, and played the album a few dozen more times, it had made it to my ‘Top Albums of the Decade’ list. Her story is a fascinating one. In 2008 she served as the personal blogger for Obama’s presidential campaign and in 2010, as a way of coping with a serious health condition, adopted the stage name “Wolf Larsen” (both the title character of Jack London’s “Sea Wolf” AND the name of her grandfather) and began performing songs at an open mic in San Francisco. A year and a half later, with the help of friends and engineer/musician Nick Stargu, these songs were compiled into an album she called “Quiet at the Kitchen Door” and released in 2011. The details on Sarah Ramey’s illness are scant but we know it is serious enough that when director Pete Lee agreed to make a video for her first single – the achingly beautiful If I Be Wrong – and wanted to film it in an antique store 3000 miles away she told him to go ahead, but that she could not travel so far to be in it.

Health and solitude may have been what pushed her to make this recording but the talent and strength that surfaces in these songs must have a deeper root.

Health and solitude may have been what pushed her to make this recording but the talent and strength that surfaces in these songs must have a deeper root. As a genre, Wolf Larsen’s music, like a lot of good music, is hard to name: the songs, borrowing from jazz, gospel and soul traditions, could be categorized as indie-folk, slowcore, lo-fi, or even #sadcorestargazingesque – you can take your pick – but the danger of these labels is of course that they reduce the magic of the music to a name. The intimacy of the songs on this album transcends the sticky boundaries of labeling. It’s certainly not a new sound: a simple guitar, modest arrangements and campfire vocals will sound so familiar and comfortable that you’ll be tempted to sing along before you know the words, but there’s also an emotion and a purpose in her voice that leaves no doubt these songs were written as a testimonial to something very real and familiar. It is, as NPR said, “a bedroom recording”.

If I Be Wrong is not the only lovely song on the record – they all are – but it is the heartbreaking gem of the album, and it shines with an elegance that can only come from brutal honesty and reflection. It was a clear choice for a first single but the album as a whole is a piece of art. The disc starts with Larsen Bowker (Wolf/Sarah’s cousin) reading from a poem called Cold Blue Nights and then launches into one intimate lullaby after another. Although each song flows gracefully (and gratefully, it seems) into the next, pretty little songs like Two Doves and Maybe, Baby balance the lot and prevent it from being too intense. Wild Things, the only live recording on the album, is an odd little number peppered with the woooo-hooos and weird howls of her audience (or small cats – I can’t be sure) and will convince you that Wolf Larsen must be just as entertaining live as she is on CD.

For anyone familiar with/fond of Cowboy Junkies The Trinity Sessions, or the slightly more obscure Low’s Things We Lost In The Fire – this album will not disappoint. If one of the purposes of music is to help us make connections and draw strength from each other (and I think it is) then albums like this are the ones that we need to hold on to dearly and listen to again and again.

More information, and more music, can be found at Wolf’s webpage, and on Facebook.

Maddox Cove to St. John’s
"White blossoms on the bushes reminded me of my brush with summer at Maddox Cove..." 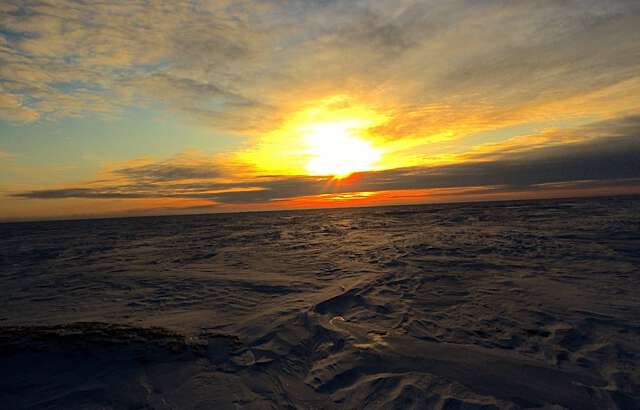 Stranded on the ice
Experiencing search and rescue first-hand in the North...