The laborious nature of childbirth in the far North

The birthing process is unpredictable and you never know where you’ll end up.

Living in a rural community and with limited or no midwifery care can create quite the unnerved pregnant lady. There are ongoing debates about whether women, in this day and age, should give birth at home with a qualified midwife or in a hospital with a team of trained professionals. The uniqueness that accompanies any birthing scenario determines a lot. Even in the context of choice, many couples visualize a delivery that can prove to be, to their disappointment, not doable, as a result of unforeseen circumstances. Others meanwhile find themselves romantically united with their intention of how and where they want their baby to be brought into the world. Both scenarios are equally valuable and hopefully unfold with the same outcome: new life. But where and how to have a baby becomes a tad bit more arduous when living in isolation.

Plenty of births but little support

Arviat is well known for having one of the highest birth rates per capita, but unfortunately has not made many visible strides when it comes to midwifery. Although this rural Arctic community is one of the largest in Nunavut, the presence of midwives has been scarce and unusually underutilized as an option for maternity care. Instead, there have been several nurses in the town who have found themselves in the situation where the imminent arrival of a baby has turned out to be their responsibility. And, ready or not, they have bravely been there to catch who ever they’ve needed to.

Although there have been midwives flown in on occasion from Rankin Inlet for routine prenatal check ups, women must fly further North or South to have a midwife deliver their baby, which uncomfortably puts them quite a distance from home and family. The relocation of women in order to have the support of a midwife negates the whole idea of staying near the comforts of home for the continuity of care. It is one thing if people decide to birth in a hotel room, friend’s house, or hospital, but having no choice but to be estranged from the family unit during such a vulnerable time is a whole new quandary in itself.

Typically, a woman in Nunavut – whether she chooses to birth North or South – must leave her family for up to four weeks before the due date of the baby. This results in women, more times then not, having to leave not only their extended family but oftentimes their other dependents for a significant period of time. When you factor in women being overdue, bad weather, and planes with mechanical issues, the stay away can be as long as six weeks. Although, there are many women who no doubt enjoy the shopping aspects of the South or perhaps welcome the break from a harried schedule, there are others who find the distance factor extremely lonely and unnecessarily stressful. Other than Iqaluit and Rankin Inlet, birthing centers for the rest of Nunavut are not available. Not only do women have to fly out to have their babies, but it is quite the distance if something goes wrong within these small towns. Risking lives is not acceptable.

Given the incredible amounts of money the government is paying to finance these out-of-community births, there must be a better way. For the expense and cost, there could be a much better investment in rural maternity care and support of midwifery within these isolated communities.

Midwifery in the remote North, however, is not entirely non-existent. The Midwives Association of Nunavut (MAN) is affiliated with the Canadian Association of Midwives but is currently facing a shortage of qualified midwives in the communities that should be assigned care (Arviat being one of them). Midwives from the south who come to the North often have short lived stays which is hardly time enough to help assist Inuit students seeking mentorship and additional training. Thus, those who desire to become midwives will most likely have to leave their community to do so.

Birthing at home or close to one’s community has been and continues to be the ideal scenario for expecting women. In consideration of this, there are initiatives presently being taken by Nunavut’s Arctic College to promote Midwifery training for Inuit women. The College has been using and developing resources that revolve around birthing on the land: information compiled with the help of elders and based on the traditional knowledge of former Inuit midwives. Also, there is a birthing center in Rankin Inlet and midwives who do work there year around. So, there is hope, after all.

Although it took a while for legislation to pass ensuring that midwives were qualified to practice across Canada, people have not stood quietly by but rather come together to address midwifery care shortages everywhere, especially in rural areas. Some argue that in spite of distance, emergency situations can pop up and regardless of who is where, the outcome can often be the same and inevitable. This may be true but it makes being close to home with the right supports all the more necessary if the going gets tough.

Traditionally, in outport Newfoundland – like most rural communities – many women were called upon to fulfill the role of midwife. Seniority was often the only qualification. Oftentimes, ladies would assist fellow relatives or neighbors when the fierce weather or shortage of doctors kept professional help away. Similarly, in the remote communities of Nunavut, many Inuit elders today can recall not one but several incidents where they would naturally be expected to deliver babies anywhere from the frozen tundra in iglus to the vast land in tupiqs (skin tents).

Amazing that anyone survived back then without all of today’s modern interventions. (No sarcasm at all.)

The circumstances under which some babies are born are unbelievable. Whether it be women of the past whose water froze to the floor beneath them while delivering during the dead of winter when heating was less than adequate, or the babies who today swim into their mothers’ arms out of a warm birthing pool, one thing remains the same: life begins in a myriad of ways. There really is no need to make it any more complicated. Just ask a woman giving birth: I’m certain she would give a litany of reasons why it need not be any more laborious. 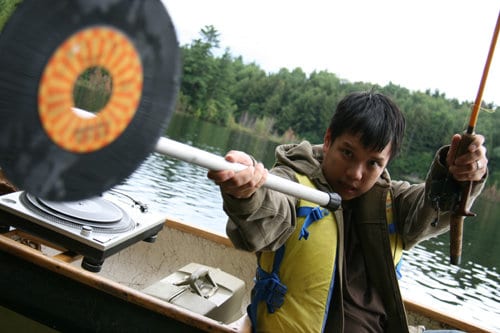