Doubling Down on the Fossil Fuel Fairy Tale

In Newfoundland and Labrador, the lack of political debate on the future of the offshore means the body politic is especially unprepared for the end of oil.

Let me start with a conundrum.

As part of my day job as a political economist I consume a lot of international economic, business, and energy news. Preparing for my research and teaching requires me to read reports in Bloomberg, the Financial Times, The Economist and other business publications. It also leads me to check out reports by international organizations, such as the International Energy Agency, and big corporations, such as BP. In my spare time, as an informed citizen, I also follow Newfoundland and Labrador provincial politics. Despite differences in scale, in normal times there should be an overlap between global political economy and local politics. The fights and values found in one should bare a family resemblance to the other.

Here is what concerns me: the debates over the global political economy and those over the Provincial economy appear to inhabit different and contradictory worlds. One of these worldviews must be deluded.

Angela Carter’s new book Fossilized is a guide to one part of this dissonance between the global political economy and Provincial economic discourse. While focused specifically on the evolution of environmental policy in Alberta, Saskatchewan, and Newfoundland & Labrador, it also has much to say on the politics of oil and gas extraction in Canada’s three petro-provinces.

What emerges is not a pretty story.

On the plus side, all three Provinces benefited from fossil fuel royalties in the boom decade of 2005-15. This boom encouraged plans to expand the oil and gas sector of the economy that included low royalty regimes, less rigorous environmental regulations, and a close relationship between the provincial governments and the fossil fuel industry. Carter’s focus is on the fate of environmental regulations during the boom decade, and this is where most of her research is concentrated, although the story is written with half an eye on the implications of the five years (and counting) of low oil prices that followed the boom.

One of the common arguments put forward by fossil fuel protagonists in Canada is that oil and gas from Canada’s petro-provinces is ‘ethical’ or ‘clean’ because of the high environmental regulations followed by the industry in Canada. The alternative to buying Canada’s ethical energy products is to buy it from foreign jurisdictions with weaker, environment-damaging standards.

Carter drives a coach and horses through this claim. In a fusion of state and corporate power, each of the petro-provinces has either reduced environmental regulations or failed to build up regulatory capacity. The focus of the three regulatory regimes is the promotion of the oil and gas sector, while regulatory assessments and monitoring are often outsourced to industry, rather than government.

In the case of Newfoundland and Labrador the regulatory regime is hampered by a lack of data, and frequently gaps in data are interpreted as meaning that there is no threat (Carter: 2020, 110). Famously, in Alberta $30 million of public money was used to set up an ‘Energy War Room’ to counter civil society groups that questioned the oil sector (Carter: 2020, 133). This cozy public-private collaboration is marked by a lack of transparency and public consultation, and by the governments’ retooling of oil industry interests into provincial interests.

The costs of the flawed regulatory regimes are easily listed. From the environmental mess that is Alberta’s tar sands (Carter: 2020, ch.1), through Saskatchewan’s scant limits on where oil exploration can take place (Carter: 2020, 81), to Newfoundland’s Terra Nova project where lifetime predicted oil spills are exceeded on average every year (Carter: 2020, 110). While the book focuses on environmental regulations, Carter does cover other costs. Governments often present oil royalties as potential revenues for diversification, but the reality is that the ‘fairy tale’ of easy money and low taxes often leads to the expansion of the oil industry at the expense of a balanced economy (Carter: 2020, 17).

One of the common claims made by supporters of oil extraction is that fossil fuel prosperity can be used to invest in other areas of society, and there are a few cases like Norway where this has happened (usually as a result of strong government control of the industry). Yet in jurisdictions like Canada the oil and gas industry is a major beneficiary of government subsidies. As a result, rather than a source of investment, the fossil fuel industry competes with other industries for government investment and financial support. In this sense support for the fossil fuel industry can work against the development of other industries, furthering dependence on oil.

Resource commodity prices are also notoriously unstable, and boom is followed by bust. Indeed Timothy Mitchell has argued that the 2005-15 boom was the result of the unusual restriction on Iraqi oil following the US-led invasion, and consequently may never be repeated. The drop in oil prices in 2014-6 sparked the economic crisis that has dogged Newfoundland and Labrador ever since. But rather than forcing a rethink of economic priorities, it led to a doubling down on fossil fuel extraction in the hope that there will be at least one more boom in the future.

No clearer example of this is Newfoundland and Labrador’s plan to ‘double the offshore’ in a decade: a plan that proposes the drilling of a 100 new exploration wells over ten years, when only 151 have ever been drilled on Canada’s east coast since 1955 (Carter:2020, 134). Perhaps not surprisingly, part of this plan also involved shortening the time between exploration and extraction though industry-government collaboration on regulation.

Yet through all this talk of environmental regulations and costs there hangs another looming threat to fossil fuel extraction in the petro-provinces. Although Carter refers to this threat, it is not her primary theme. Doubling down on oil and gas runs counter to dealing with climate change.

Since Carter submitted her manuscript three major events have conspired to reduce oil prices to levels that threaten to make Canadian extraction unprofitable. The first was the cut in oil prices by Saudi Arabia in March 2020 as a result of splits between the world’s oil producers over restricting supply. While there was eventually an agreement on cuts, the split was never resolved, and the potential for another price cut by cheap oil producers like Saudi Arabia will have dire consequences for more expensive producers like Newfoundland and Labrador. The second was the Covid-19 pandemic that cut economic activity, and led to a further drop in oil prices. While the world is likely to rebound from the pandemic, the extended economic crisis may continue to depress oil prices in the short term.

It is the third that is likely to be the coup de grâce for fossil fuels in Canada, though. Up until now efforts to deal with climate change have done little to curb the demand for fossil fuels. This is no longer the case. Many key governments and corporations have clear deadlines for phasing out the emissions of green house gases. Some of these, such as the targets for the UK, have been made legally binding. Dramatic drops in the cost of renewable energies, especially solar, increasingly make expensive-to-extract oil deposits no longer cost effective.

The question within the energy sector now is not if there will be peak demand for oil, but rather: when? Will it be by 2040, before 2030, or (as in one of the three scenarios BP presented to its investors) did it already happen in 2019? If peak oil demand is coupled with ‘the green paradox’ (Carter: 2020, 13) of cheaper jurisdictions like Saudi Arabia pumping out more oil to profit off their reserves before the end of oil, the result is likely to be longer term lower prices for oil that, while good for oil consumers, may signal the beginning of the endgame for the oil industries in Canada’s three petro-provinces.

This brings me back to the dissonance between the way that fossil fuels are being talked about in global energy and business circles, and the way it is approached in Newfoundland and Labrador. The material I read for work talks about stranded fossil fuel assets as cheaper renewables start a three-decade transition off fossil fuels. It talks about peak demand leading to low oil prices, and discusses decarbonization targets that now have teeth. They also talk about the sea-change in governments as diverse as China, the EU, the UK, and the US (including the effects of Biden’s victory) that now means governments have become serious about global heating at this eleventh hour.

These reports, I hasten to add, appear in conservative business publications, government and international organization reports, and even in economic outlooks produced by major energy or financial corporations. Consequently, they represent an emerging consensus in the wider global business and government community.

Yet, dismiss them is exactly what the Provincial government, the two main Provincial political parties, and public discussions of economic development in Newfoundland and Labrador seems to do. Why do Canada’s petro-provinces show such little concern about this global sea-change?

The answers lie in the pages of Carter’s well-researched book. The cozy relations between governments and the oil industry have produced an anemic and opaque regulatory process that has helped lock these governments into an extractive logic that it is difficult to break from. Having bet their societies’ futures on fossil fuels, it is now in their (short-term) interests to relegate climate change to a distant problem, and to ignore all the mounting evidence of the effects of the coming global energy transition.

While a workable short-term strategy for 4-year governments, it is a dangerous one in the longer term. In Newfoundland and Labrador, with both major political parties agreeing on the need to expand the oil and gas sector, the lack of political debate on the topic means that the body politic is especially unprepared for the end of oil. They are, in short, doubling down on fossil fuels, but avoiding any public debate on the issue that might have public policy teeth.

While I am cautiously optimistic about the ability of the world to adapt to and halt climate change over the next three decades, I am pessimistic about the ability of this Province to manage the storm. Even at this late stage there are measures the government could take to mitigate the worst of the fiscal crisis caused by the weakening of oil, but the signs of action are just not there.

As the Provincial election campaign gathers steam, the issues raised by Carter just fail to show up in the emerging platforms of the two largest parties. Perhaps the Premier’s new Economic Recovery Team will surprise me after the election, and its chair has at least been talking about diversification away from fossil fuel dependence. At the time of writing, though, I see few reasons to be optimistic.

Lucian M. Ashworth is a political economist in the Department of Political Science at MUN.

The Independent is 100% funded by its readers. Your pay-what-you-can subscription or one-time donation provides a base of revenue to keep our bills paid and our contributors writing. For as little as $5 a month, you can fund the future of journalism in Newfoundland and Labrador.﻿ 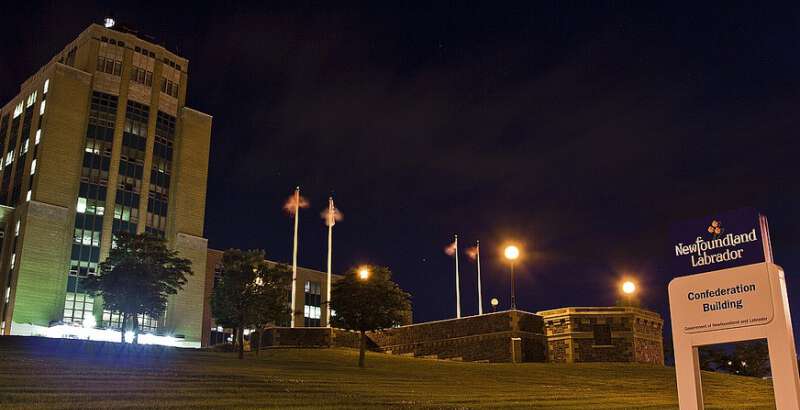 What Does the 2021 NL Election Mean for Citizens?
From the circumstances prompting it to the candidates running, here is everything you need to know about Newfoundland & Labrador's 2021 general election. 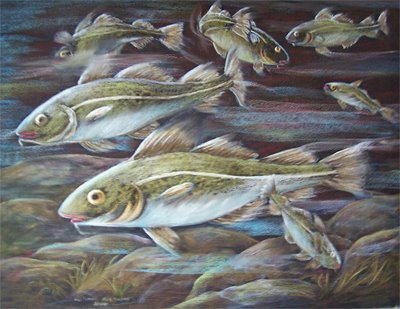 Do Fish Carry Passports? (And Does it Matter?)
All of us here in Newfoundland and Labrador need to push our provincial leaders to kick their bad habit of leaving the fishery to the…