In a St. John’s that doesn’t have a professional or semi-professional sports team, does it not seem sensible that varsity sports fill that void?

The Atlantic University Sport (AUS) women’s basketball championship happened this past weekend in St. John’s. Did you know that? I did, but only because my time outside the sports department of the Indy is spent working at Memorial University. I saw some posters on my way to Tim Horton’s, but other than that I wouldn’t have known a thing about it.

I have to think that’s a problem, though I admittedly don’t know as much about marketing as I’m sure those who created those posters do. Plus there were probably some radio spots, but the global pandemic of Bieber Fever keeps me well away from the airwaves these days.

So here’s the thing: if you’re having an event, actually one with some relevance, don’t you want people to know about it? The sports market in Newfoundland is a ghost town. If you don’t even have any competition, there is no reason to limit a push to put bums in seats.

In a St. John’s that doesn’t have a professional or semi-professional sports team and hasn’t in almost three years, does it not seem sensible that varsity sports fill that void?

Why not the Sea-Hawks?

Despite what some will tell you, hockey is a tenuous prospect in the city. Due to the cost of travelling and the roadblocks those in the city and in potentially viable leagues put up, it won’t be easy to bring a franchise here again.

So why is it that Memorial, home to a bevy of sports teams, hasn’t made a more noticeable attempt to get its claws into those fans?

Soccer has grown on me as a summer sport that’s worth a few dollars to go watch, and the occasional amateur boxing or kickboxing card makes its way onto the calendar throughout the year. Aside from these options though, there really isn’t much for the sports fan to do.

So why is it that Memorial, home to a bevy of sports teams, hasn’t made a more noticeable attempt to get its claws into those fans? There’s plenty of money to send a team of professors to Russia to present a paper on Northern Canadian ice floes, but funding for advertising the sports teams stops at some posters and maybe a couple of radio ads? Come on now.

American college sports are actually bigger than pro sports in some towns. A prime example is Memphis, a college basketball hub for decades that was awarded an NBA franchise based on their perceived love of the sport. Only it wasn’t the sport that the city loves, it’s the varsity team. The NBA’s Grizzlies, moved from Vancouver due to poor attendance, are actually doing worse in Memphis and are actively seeking a way out. What’s to say St. John’s, a rapidly evolving city with eastern Canada’s biggest campus right at its heart, couldn’t earn similar support for varsity clubs?

Reality is, varsity athletes are among the best in the country. Definitely the best non-professionals. They work hard, train hard, and take their roles very seriously. Many of them are brought in on scholarships, others are looking to earn scholarships through a combination of play and academic performance. There are real, tangible rewards for varsity athletes.

St. John’s is more diverse and affluent than ever before. Where the city was long seen as a place where sports fans loved hockey exclusively, the influx of new faces and new cultures might be exactly what varsity sports needs to go to the next level. And once again, the lack of competition for fan dollars only feeds the idea.

Next time the Memorial Sea-Hawks are hosting a big event, how about we go beyond the same 8.5 x 14 posters that lousy cover bands and cheap drink nights get on billboards around the city? Promoting the program professionally is the first step towards being credited as a place where great athletes perform and entertain on their field of choice.

Entertain the ones who know the games are even happening, anyway. 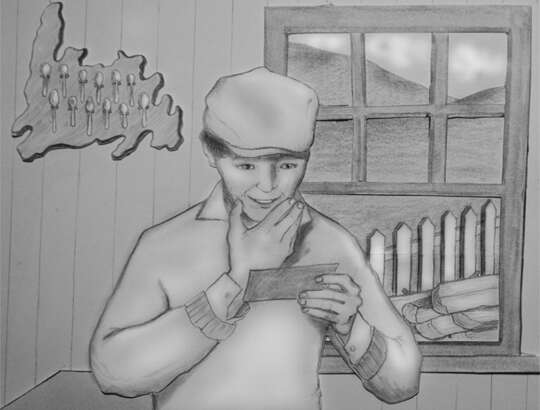 Chapter 3: The contract
What hole-in-the-rocks outport community can offer some kid $90,000 to stay put?