Following a weekend of nationwide protests, and as Canadian politicians host their counterparts from the rest of the Americas in Toronto this week, people are asking: What will it take for Canada and its provinces to decarbonize their economies and join the growing global movement toward clean, renewable energy.

Last weekend thousands of Canadians took to the streets with one demand: a just and clean economy that serves both Canadians and the environment.

The “Jobs, Justice and the Climate” march brought together a variety of groups, from labour unions representing energy workers, to gender equality groups, to anti-poverty, environmental and social justice groups, to immigrant, refugee and Indigenous people.

The movement connects climate change to social crises like inequality, poverty, unemployment and oppression against minorities and Aboriginals, which are endemic in an economic system whose mandate is to generate corporate profit for a few at the expense of the majority. As author and activist Naomi Klein recently pointed out, “our current economic system is both fuelling the climate crisis and actively preventing us from taking the necessary actions to avert it”.

A system change that is fairer to the people and the environment is needed in order to avert the current social, economical and climate crises. A business-as-usual approach is not going to cut it. The weekend of action was timed to coincide with the Climate Summit of the Americas—being held in Toronto this week—where leaders will talk about the economy and the climate in the lead-up to the United Nations climate negotiations in Paris (Conference of Parties, or COP21) at the end of the year.

Jobs, Justice and Climate for Canadians

“We don’t have to choose,” Fonda said Sunday. “In fact renewable energy — doing away with the fossil fuel-based economy — will create more jobs, more justice and more democracy.”

The rally was preceded by a series of actions and manifestations from coast to coast, showing that Canadians are ready to build an economy that reflects our values, creates sustainable jobs, and protects the air, land and water.

On Friday 100 divestment student organizers all over Canada staged sit-ins in the offices of Members of Parliament from across the political spectrum to call for a moratorium on new tar sands development and the development of a plan that will allow Canada’s transition to a clean economy informed by climate science.

On Saturday, upward of 50 people in St John’s marched in the “We Are Greater Than Tar Sands” demonstrations as part of a national day of action, chanting things like “The tar sands have got to go!” and “No justice, no peace. We have got to hit the streets!”

The topic of oil sands development and climate change is a contentious and sensitive issue in Newfoundland and Labrador, with thousands from this province working in the Alberta oil sands or in the offshore oil industry as ways to provide for their families.

[T]he collapse of the cod fishery…is a sobering reminder of the fragility of our ecosystems and why we cannot impose neoliberal economic demands on them.

Part of this dependency on oil jobs stems from the collapse of the cod fishery in the early 1990s, which put 40,000 people out of work and is a sobering reminder of the fragility of our ecosystems and why we cannot impose neoliberal economic demands on them. The current drop in oil prices is again causing negative socio-economic effects for Newfoundlanders and Labradoreans.

A 2015 report by Statistics Canada shows that the unemployment rate in Newfoundland and Labrador rose this year from 12.6 per cent to 13.8 percent, making it the second highest in Canada. It is clear that we are reaching a tipping point and N.L. needs to make the transition from a short-termed unsustainable economy to a clean and sustainable economy that provides long-term jobs and solutions for Newfoundlanders and Labradoreans.

At the march I talked to Divest MUN Logistics Coordinator Conor Curtis about the province’s dependency on the fossil industry.

“Fossil fuel corporations have such great power and influence in Newfoundland. People are scared to speak out because of our dependency; that fear has to end,” he said. “Ocean acidification is going to affect jobs worldwide but it could actually affect Newfoundland’s own fisheries within the near future. These impacts in the long run don’t create jobs; they worsen things for everybody. This is a global problem but a lot of the solutions start locally and they have to start on institutions too.

“We need the institutional changes and policy changes so that people can have the options.”

One institution most in need of change is Memorial University (MUN), which has not only so far eluded the growing number of institutions divesting from fossil fuels but is in fact pioneering research for Arctic drilling.

“The senior administration at Memorial University has tied the university’s long-term growth to Newfoundland taking a lead role in exploring and exploiting Arctic oil and gas, which is an extremely dangerous option,” MUN scholar Robert Sweeny told me at Harbourside Park in St. John’s Saturday.

“We have absolutely no capability of handling an oil spill or disaster that will happen if we are in those extreme conditions. It is an extremely dangerous policy and it links us to a very anti-human and anti-democratic set of policies,” he continued. “If the universities are not on board dealing with this issue we aren’t going to be able to turn the economy in time to save from a catastrophic increase in weather temperatures.”

2015: a year of landmarks for Canada and the climate

The time for this national mobilization could not be more critical. With a new global treaty on climate change to be signed at the end of the year in Paris, and with the upcoming federal election in Canada, this will be a year for change and renewal; history is in the making.

Whether or not we move into a low-carbon, climate-resilient future is up to Canadians and it will be more decidedly contested on the electoral battlefield this fall. There is an overwhelming number of Canadians who are eager to oust the Conservative Party from office in the October federal election. Prime Minister Stephen Harper’s economic development plan, which has been heavily reliant on oil sands development, has damaged the economy and failed Canadians and the environment.

Harper’s decade in government has succeeded at stalling any meaningful climate action, converting us in an international pariah, weakening environmental laws, slashing budgets for environmental agencies and muzzling scientists — all in the name of fossil fuel expansion and “prosperity”.

Now that oil prices have plummeted, Canada’s economy is going into recession. This is hurting Canadians through loss of jobs, rise in unemployment and federal and provincial budget cuts on social services. This affects us all on different scales but has greater impact on the most vulnerable.

The false rhetorical dichotomy of environmental protection at the expense of the economy has placed us behind other countries on climate action and delayed with devastating consequences our transition to clean renewable energy, which could create long-term jobs and sustainable development. A government that turns its back to society is worth changing, and Canadians know that.

In the past Canadians, especially those in our province, have been reluctant to change because of the economic benefits generated from the fossil fuel industry, including the creation of jobs here at home. It’s understandable that people are scared of decarbonizing our economy, but they need to understand that change is good, change is already happening around the world, and it is going to catch up with us regardless. It’s simply a matter of whether we want to be ahead of the curve, or behind it.

Canadians, including Newfoundlanders and Labradoreans, are not exempt from the impacts of climate change. Incidents like the wildfires in Saskatchewan, which have displaced 13,000 of Saskatchewan from their homes this summer, or the 2013 flood in Calgary, are signs that climate inaction is already coming back to haunt us.

Whether or not we move into a low-carbon, climate-resilient future is up to Canadians and it will be more decidedly contested on the electoral battlefield this fall.

Green, renewable technologies are emerging in the global markets. Advanced by innovation in technology and science, and economics of scale, the production costs for renewables have dropped, making renewables a cheaper and cleaner alternative to high-cost energy like fossil fuels and the Alberta oil sands. The cost of wind and solar power has plummeted and is now cheaper than grid electricity. In fact, the International Energy Agency estimates that solar power will be the world’s largest source of energy by mid-century.

Global investors know this well. In recent years we have seen investors like Rockefeller Brothers Fund, Norway’s oil fund, and the Church of England divesting from fossil fuel, which in overall represent over $1.5 trillion in assets.

Decarbonizing our economy from fossil fuels could in fact give us an economic boost by creating long-term jobs while addressing climate change. We need to shift our fossil fuel dependent economy into a low-carbon economy fast in order to keep global temperatures below 2 degrees, which is the international and scientific consensus beyond which ecosystems begin to collapse.

In the lead up to COP21 countries are submitting their Intended Nationally Determined Contributions (INDCs), pledges for target emissions for the new global agreement. Even China, the world’s largest greenhouse gas emitter, has pledged to lower carbon emissions by 60-65 per cent from 2005 levels by 2030, and to raise its share of non-fossil fuels in primary energy consumption to 20 per cent.

By comparison, Canada’s has committed to reducing its carbon emissions by 30 per cent below 2005 levels by 2030, perhaps the least ambitious target in the bloc of industrialized countries. As pointed out by environmentalist and 350.org co-founder Bill McKibben in a recent interview, Canada was once thought of as “a force for good in the world.”

Now, in light of the Harper Government’s dismantling of the country’s environmental laws and its ongoing intimidation of environmental groups and First Nations, said McKibben, “it takes a strange new calibration of peoples’ mental geography to understand for the moment Canada is an obstructive and dangerous force upon the planet.”

Canadians have often been part of the solution to world crises and the spirit of Newfoundlanders and Labradoreans has proven our capacity for resilience and adaptation in the face of adversity.

The world is certainly following a trend of economic decarbonization and renewable energy development. Will Canadians too? 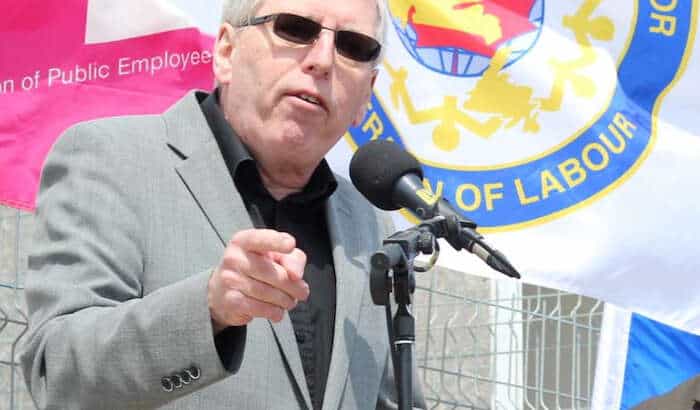 The orange wave swells again
With mere months to go until the federal and provincial elections, the New Democratic Party is enjoying a resurgence at both levels. Can they maintain,…

Two-tiered level of services for people living with autism spectrum disorder
Unfortunately, for parents with children on the spectrum, in Newfoundland and Labrador your child's development and future hinge on your ability to foot the bill…