A night at the Duke…

Our politicians are constantly battling it out with each other – in the House, in the media scrums, in the papers. Partisan politics is alive and well. But this is Newfoundland and Labrador. Surely even the most passionate of foes must get together for a beer and a gab now and then, right? Maybe they even all go out for beers together, say on a Friday night, down in that corner table in the Duke of Duckworth. What would it be like if they did?

The following is a completely made up, fictional, satirical, utterly untrue, never-was-an-untruer-word-said, fantastical fiction of what it might be like. It’s so untrue, that even if it really happened, it wouldn’t really happen (sort of like becoming a have province).

Setting: Duke of Duckworth. Corner table at the back.

Ryan Cleary: “To all the boats on the water, to all the bartenders behind the taps, to all the servers in their aprons, to all the patrons behind their glasses, I’d just like to say how glad I am to be seated here tonight. Also, anybody want some fries?”

Christopher Mitchelmore: “Speaking of fries, you haven’t really had fries until you’ve had the fries at Lightkeepers’ Seafood Restaurant in St. Anthony. The fries of rural Newfoundland have no match!”

Dwight Ball: “There’s great fries at Liberal Party HQ, Ryan. With a dressing nan would kill for. Come on by sometime, we’ll have a chat. The invite’s always there. The door is always open.”

Dwight Ball: “Be nice now man, I just bought you a beer.”

Danny Williams: “With the money I brought into this province.”

Danny Williams: “Calling me a liar? Watch it or I’ll sue ya.”

Ryan Cleary: “To all my friends around this table, and all those in the tables around us who are craning their ears to listen, and to the DJs at Velvet next door whose pounding bass-lines remind me what a strong and invincible province we live in, I say this: can we not talk politics just for once? I mean, what about sports? How about them Leafs, hey?”

Lorraine Michael: “God Ryan you’re not a Leafs fan are ya?”

Ryan Cleary: “To my esteemed provincial counterpart, and all those others who might despise the Toronto Maple Leafs and/or exercise a blasé indifference, I would simply point out that they’re a far cry better than most other teams around. I mean the IceCaps are fine and all, but they’re not a real team, if that’s what you’re getting at.”

Danny Williams: “Stop disparaging the IceCaps Ryan or we’ll pick this up in court.”

Ryan Cleary: “To all the lawyers in this city, and all the judges who sit in the esteemed chambers passed down to us from our Responsible Government forebears, come on now. You’re not gonna sue me over a sports opinion are you?”

Danny Williams: “To quote the prick whose little kid is gonna kick your ass in the next election, just watch me.”

Dwight Ball: “Geez Danny you’re in some mood tonight. Look, there’s Dave Cochrane over there at the pool table. Why don’t you go over, take out some of your aggression on him.”

Danny Williams: “Dave who? I see no one.”

Tom Marshall: “Can’t we all just get along?”

Christopher Mitchelmore: “Speaking of court, I know that courts produce a lot of paper, and that reminds me of the importance of revitalizing the pulp and paper industry in rural Newfoundland. Did you know the first pulpwood manufactured in this province was at Black River, Placentia Bay, back in 1897—”

Lorraine Michael: “—Can it, Mitch.”

Dwight Ball: “Anyway what about those fries?”

Christopher Mitchelmore: “Speaking of cans, did you know Port Saunders once had a booming lobster canning factory?”

Danny Williams: “Does he ever turn off?”

Dwight Ball: “Geez b’y Danny, you can be so mean sometimes.”

Christopher Mitchelmore: “Ah, the outdoors…the drizzly air outside tonight reminds me of one fine spring morning I awoke refreshed and renewed atop a hillock overlooking Roddickton, the morning dew glistening on my brow the way only rural Newfoundland dew glistens—”

Danny Williams: “—I’ll put you in direct touch with some of my feelings, Ball. Hot yoga’s expensive these days, but I’ll help you get grounded for free.”

Tom Marshall: “No fighting on a Friday! Save it for the House.”

Danny Williams: “Just kidding around. Come on Ball, I’m trying to help you out. If you’re gonna be premier next, you gotta have the chops for it.”

Christopher Mitchelmore: “Speaking of chops, I know most of you prefer The Keg, but if you ask me the best pork chops on the island are made by this feller down in Wild Bight—”

Dwight Ball: “He was here earlier, but had to take off for a bit. Riot down on George, and the Constabulary were short-staffed. He went down to give the b’ys a hand.”

Ryan Cleary: “To all the media that disparage us, to all the political scientists who dissect us, I say this: he may be an arch-foe when it comes to partisan politics, but by golly, I can respect a leader of men like that. Taking justice into his own hands. Protecting our fair, innocent city from the sharp winds of ill-begotten wealth, the virulent mainland drug trade that has seeped onto our glistening shores—”

Dwight Ball: “—Actually, The Works burger joint had 2-for-1 burgers on tonight but the b’ys ran out of burgers. Sparked a riot.”

Christopher Mitchelmore: “Had they relied on good Northern Peninsula beef, there would have been no shortage. Our herds are indomitable.”

Dwight Ball: “All over now? George Street back to normal?”

Paul Davis: “Oh yes, wasn’t that bad to be honest. One blast of the sound cannon and it was all best kind. I think we accidentally sunk a few ships in the harbour, but we’ll know better next time. It’s all in the decibel setting.”

Lorraine Michael: “Sweet saints above. Where’d you get a sound cannon?”

Paul Davis: “Gift from the b’ys up in Toronto when I won premier.”

Paul Davis: “What, the sound cannon? You’re not gonna go all Orwell on me too, are ya, Danny b’y?”

Danny Williams: “Are you kidding? I was using a sound cannon as a personal stereo back when lesser men were still using CDs. I shower with a water cannon. I pour pepper spray on my pasta. No, what I’m disappointed by is that the 2-for-1 burgers are all gone. I could really go for a couple right now.”

Christopher Mitchelmore: “I got some moose up to the house sure. Good, Northern Peninsula moose. I could cook up a feed.”

Lorraine Michael: “That’d be heavenly. With a cuppa tea?”

Paul Davis: “How about some public safe-tea? Haha.”

Danny Williams: “Davis, you trying to be funny? Nobody likes a funny premier. You remember that now Ball.”

Tom Marshall: “All right b’ys drink up. It’s back to Mitch’s for a feed and a brew.”

Paul Davis: “I got the Paddy Wagon parked outside. We’d all fit in that sure. Lorraine, you haven’t been drinking, why don’t you drive?”

Lorraine Michael: “All right, out to the Paddy Wagon all of you! And no backseat drivers – I won’t take any challenges to my driving!”

Ryan Cleary: “To all those we leave at the bar, and to all the drinks we have yet to drink, and to all who may only read of this, I say this: Happy Friday to all, and to all a goodnight!” 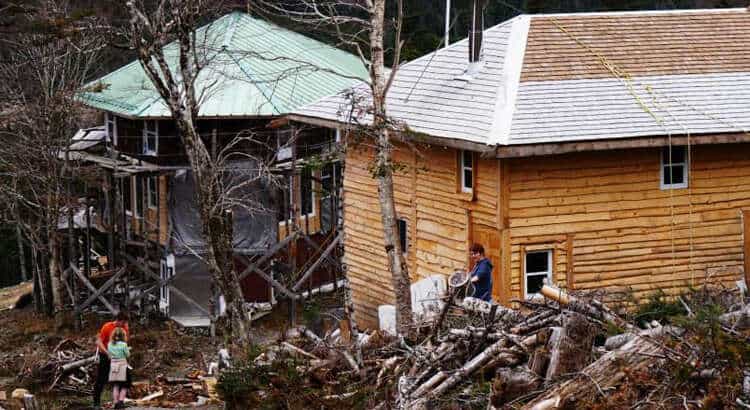