Government must respect the right of workers to speak out

It is often said that desperate times bring out both the best and the worst in people.

The aftermath of the provincial budget and the Dunderdale government’s dangerously irresponsible budget cuts have produced a stirring example of this. While the cuts belie a shockingly arrogant double-standard in public [mis]-use of funds (where it’s okay for the government to throw a fancy $16,000 party to celebrate ramming through the controversial Muskrat Falls development project, at the same time as College of the North Atlantic has its funding slashed, adult basic education is thrown to the wolves, and support for people with disabilities effectively eliminated), the number of people speaking out against the cuts has been impressive and inspiring.

They certainly know much better than cabinet ministers who are cushioned from reality by $150,000 salaries, pensions that aren’t under threat, and who make decisions based on information passed through the multiple filters of partisan ministerial briefings.

One such hero is Ray Kuszelewski.

And he’s a hero who is now paying a price for his honesty, integrity, and devotion to his job and the province in which he lives and works.

The price of the truth

Kuszelewski’s “crime” was in answering honest questions put to him by CBC reporters about the impact of the funding cuts.

For that, the area director of legal aid for Central Newfoundland was suspended from work: an outcome which only served to increase the workload of the other under-resourced office staff.

The persecution of Kuszelewski is something for every Newfoundlander and Labradorian – indeed, for every Canadian – to be deeply concerned about.

First of all, it demonstrates a dangerously cavalier and irresponsible approach by those who initiated and authorized the action (in this case, the Legal Aid Commission). It suggests those in charge cared more about intimidating and silencing government employees, than about ensuring the adequate provision of services in Newfoundland and Labrador. Kuszewlewski’s suspension slowed down the operation of an already overburdened and under-resourced office, thereby undermining the provision of legal aid services. If this approach were used against physicians who speak out against cuts to health care, patients would die as a result. In this case, the outcome is that the smooth functioning of the justice system is threatened: justice put on hold by an act of political repression.

Kuszelewski – like others – spoke out because he believes in the work he does, and wants to ensure the justice system in this province is not endangered. Did those who authorized his suspension consider the impact this would have on those accessing legal aid in this province? Did they in fact believe that punishing his good-faith, free speech act was more important than the provision of the service they’re supposed to be providing? If so, their priorities need to be seriously examined. It’s hard to see this as anything other than a case of intimidation, repression and – let’s be frank – bullying.

Government on the run

Kuszelewski’s suspension was an act of political repression, plain and simple. Even though those responsible for the act deny there was pressure from higher levels of government to go after Kuszelewski, they are still part of that government system. From the early 20th century onward, acts of political repression have often been couched in bureaucratic terms, to disguise what they really are: crimes against democracy, free speech, and the other cornerstones of our system of democracy, law and justice.

Students of political science or philosophy will be familiar with the work of Hannah Arendt. The German-American political theorist was forced to flee Europe during World War II (and was in fact imprisoned for a short time in a Nazi prison camp, but managed to escape). After the war, she focused a great deal of her work on trying to understand how the horror which was Nazi Germany was made possible: how could humans commit such evil acts? She concluded that one of the great evils which helped to make Nazi Germany – and other repressive regimes – possible was the power of bureaucracy. The ability to point to rules, and to rely on the excuse “I was following orders” or “I was following policy” instead of thinking and speaking for yourself, and instead of making decisions for yourself about what is right and what is wrong, is what allows evil things to happen. She coined the phrase “the banality of evil”, stating famously that “The sad truth is that most evil is done by people who never make up their minds to be good or evil.” It’s not that people set out to do bad or evil things. Rather, it’s because they blindly follow orders instead of thinking and acting for themselves, that they become part of an evil system. They don’t think about the consequences of their actions, and comfort themselves with the thought that they’re just following orders. “Such remoteness from reality and such thoughtlessness can wreak more havoc than all the evil instincts taken together,” she wrote.

Public employees and the importance of public voice

That is why it is so important that honest, in-the-know workers like Kuszelewski do speak out, and that managers who try to intimidate them from doing so be admonished for their crass and reprobate bullying. Whistle-blowers and internal critics play a vital role in our democracy. They’re our society’s front-line defense not only against bad policy, and against government inefficiency and waste, but also against the unchecked role of bureaucratic indifference.

When the story about Kuszelewski broke, the news websites were chock full of comments in support of Kuszelewski and others like him. But there were the scattered comment to the effect of “employees shouldn’t expect to be able to speak out against their employer”. What are we to think of that argument?

Well, quite frankly it doesn’t apply. The employer, in the case of any public employee, is the society they work for. Their paycheque comes from an incorporated entity, but the term ‘public employee’ reflects who they are – an employee serving the general public. The application of private-sector, shop-floor mentality to government and other public employees is entirely inappropriate. These employees work for US. Yes, they must operate according to a hierarchy in order to get everyday tasks performed efficiently, but if they feel something is going wrong, they have not only a right – but a profound responsibility – to tell us, the people they work for.

So the managers who disciplined Kuszelewski were not only out of line toward him, but they were in violation of their responsibility to us, the people that our government serves.

What happened to Kuszelewski is the sort of story we expect to hear out of two-bit, autocratic regimes (North Korea, Honduras) or sprawling bureaucratized dictatorships like China or Russia.

A democratic government that rules through repression and silences criticism with heavy-handed punishment risks losing the confidence of the people it was elected to represent, and the legitimacy of its authority.

The excesses and growing controversies against the democratic rule of law by the Dunderdale government have exceeded those of any in the recent history of Newfoundland and Labrador, and bring to mind the autocratic chaos that characterized the end of the Smallwood regime several decades ago. The question must be posed whether the Dunderdale regime even possesses the competence, public confidence and democratic legitimacy to carry out the remainder of its two-year mandate, or whether it ought to be called upon to stand down for a general election in order to re-affirm public confidence in a badly shaken system. A government with integrity would do so. I won’t be holding my breath.

But most importantly, the persecution of hard-working public employees must stop. Those who have spoken out – like Kuszelewski – personify the courage, integrity and quality of the highest calibre. At a time when the actions of our provincial government have made us the shame of the country, the actions of these courageous and integrity-driven employees make us proud. They are the true heroes.

The government hacks who suspended Kuszelewski may have the managerial power to do so, and will probably get away with this reprehensible action.

The self-destructive spiral of the Dunderdale government depresses us all. But the courage of people like Kuszelewski is what gives us hope. As long as others follow in his footsteps, we can rest assured that Newfoundland and Labrador’s future is still in safe hands. 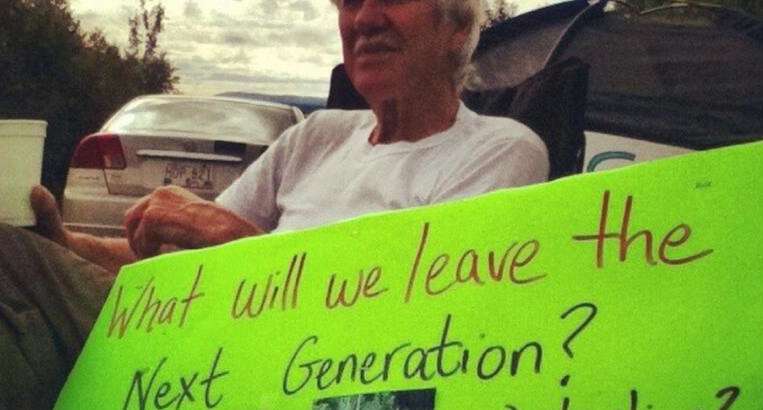 Hunger striking NunatuKavut elder calls for a unified Labrador
As discontent over Muskrat Falls mounts in Labrador, 74-year-old Jim Learning is being detained in solitary confinement and is on day five of a hunger…

Impacting Benefit Agreements
The Newfoundland government could learn a thing or two from Nunatsiuvut. If only it stopped trying to take their money.