Budget 2016: Keeping up the pressure

There is still time to stop this budget.

Budget tensions—and anger—continue to grow in the province. After a month of protests, which have grown to participation rates in the thousands, Dwight Ball’s Liberal government has dug in its heels. Its message to the public: We will not listen to peaceful protest. We will not listen to good economics. We’re passing this budget and we don’t care what any of you think.

The Liberals’ arrogance now surpasses that of the Kathy Dunderdale-led Progressive Conservatives. The PCs learned the price of arrogance. The Liberals appear to be queuing up for their own lesson. But do they really care? Dwight Ball and Cathy Bennett already have their fortune: they live in a world of wealthy elites whose reality is far removed from that of the average Newfoundlander or Labradorian. Even if they’re turfed from office, they’ll still own their millions. Even if their communities crumble, they’ll still have their vacation villas to escape to. One would have hoped they would have the simple human decency to respect public opinion and listen to reason. Instead they’ve dug in their heels, hired their crisis management firms, and covered their ears to the cries of the commoners.

But not all Liberals are cut from the same cloth. There have been widespread calls for Liberal MHAs—particularly rural members and backbenchers—to vote against their government’s own budget. Some of them appear almost inclined to do so. Scott Reid, MHA for St. Georges-Humber, has had the courage to speak out against the cuts to public libraries, which affect libraries in his district. John Finn, Liberal MHA for Stephenville-Port au Port, has also criticized the budget. Harbour Grace-Port de Grave MHA Pam Parsons has signalled her intention to fight against measures in this budget that will devastate her district.

Meanwhile, other Liberal MHAs—some of whom just barely squeaked by in the last election—are facing considerable criticism from their constituents. Mount Pearl–Southlands MHA Paul Lane and Harbour Main MHA Betty Parsley (against whom a petition is already circulating) both squeaked by with only a couple hundred votes. Terra Nova MHA Colin Holloway squeezed by with a mere 54 votes. Those who hope to keep their seats face a dilemma: Is their political future best secured by voting with the government, or voting with their constituents?

The challenge is particularly profound for MHAs in rural parts of the province. The rich and powerful like Dwight Ball and Cathy Bennett live in a world of their own (as does Education Minister Dale Kirby, who gets to return to a nice position at MUN when he finishes destroying the province’s education system). But other MHAs have only their communities to return to. And for those outside of St. John’s in particular, a very different relationship exists between constituents and their elected representatives — a much more personal relationship. For those willing to speak out, doing so could save their political futures. For those who don’t, their days—and reputations—may be numbered.

A rich history of non-confidence

Political pundits have pointed out that the budget is a ‘confidence motion’, meaning that if enough MHAs vote against it, the government could fall. Some pundits have suggested this means MHAs won’t vote against the budget. But it’s useful to remember that governments losing confidence votes is nothing new in Newfoundland. During our pre-Confederation history there were plenty of examples of politicians voting with their conscience, not their government — even if it meant a non-confidence motion.

The 20th century opened up with one. James Winter was the Tory Prime Minister in 1900, but his administration faced growing public resentment as a result of its cosy relationship with wealthy industrialists (particularly the Reid Company, which was building the Newfoundland Railway). It was revealed that the government had signed contracts with the company which gave incredible concessions to these corporate barons at the public expense. Sound familiar? Aware of the growing public outrage over government’s siding with the wealthy business elites instead of the average voter, members of the ruling party listened to constituent anger and voted against their own government on a confidence motion. The Tories lost the ensuing election.

Barely two decades later, the same thing happened. More allegations of corruption were levelled against the government – this time led by a Liberal coalition (the Liberal-Reform Party) — and then-Prime Minister Richard Squires was forced to resign (over questionable loans and political donations, public funds being used for projects that benefited politicians’ private business interests — the usual sort of thing). This didn’t solve matters though; within a year the government, now led by William Warren, collapsed on a confidence motion.

Of course, Squires managed to evade conviction and eventually worked his way back into politics, getting re-elected as prime minister in 1932. And we all know how that ended, right? An angry crowd of protesters, reportedly numbering 10,000, made its way to the legislature (then located at the Colonial Building). When Squires refused to come out to address them, the protesters stormed the legislature and chased him out the doors. His government was trounced shortly thereafter.

Premier Ball, and the Liberal MHAs, would do well to remember these lessons of history. Members have voted with their conscience, and against their government, before in Newfoundland history, and they will doubtless do it again. The question is, will they do it this month? And which of them will have the courage to do so?

The need to sustain pressure

If there is a lesson here, it is this: sustaining pressure works.

It is imperative for all of us to continue demanding accountability from our MHAs. Email them. Phone them. Demand that they contact you; that’s their obligation. And when they do, let them know that you’re having none of Dwight Ball and Cathy Bennett’s entitled arrogance, and that you expect them to vote against the budget, or at least demand significant changes.

Don’t accept silence — keep at them.

The people of the province have demonstrated they’re not backing down either in demands for accountability and changes to the budget from Ball’s Liberals. With escalating protests on the Hill, silent protests at schools in communities around the province, walk-out protests at health care facilities, an upcoming provincial women’s protest, and other upcoming student, union and community protests, the energy being generated in opposition to this budget is only growing. But to keep that energy going, there’s plenty each of us can do as individuals as well.

Start circulating a petition in your district, naming your MHA directly. Perseverance pays off. As I was in the process of writing this column, I received an email from someone who said their MHA had finally agreed to a meeting after several demands, and they were wondering what they should say to the MHA. Tell them how this budget will affect you and your community, and demand that they vote on behalf of the constituency, which means voting against the budget.

Rich folk like Dwight Ball and Cathy Bennett are not passing this budget for the province. They have demonstrated that they care neither for the people who elected them, nor the province they govern. For them, their term in office is merely a notch on their resume, to use when they go back to the private sector. It’s a budget full of self-interest for the wealthy; wealthy people outside of government get to continue avoiding paying their fair share to the public purse, while wealthy people within government show their class loyalty and line themselves up for plum jobs in the private sector once their term is over.

The ones who will be cast aside in this process are the rural MHAs and backbenchers, whose loyalty to their self-interested leaders will simply impoverish their districts and ruin their reputations in their own communities. They are the ones most likely to listen to reason — for the sake of their own integrity and the future of the communities they know so well.

Let them know how you feel. And don’t let up. 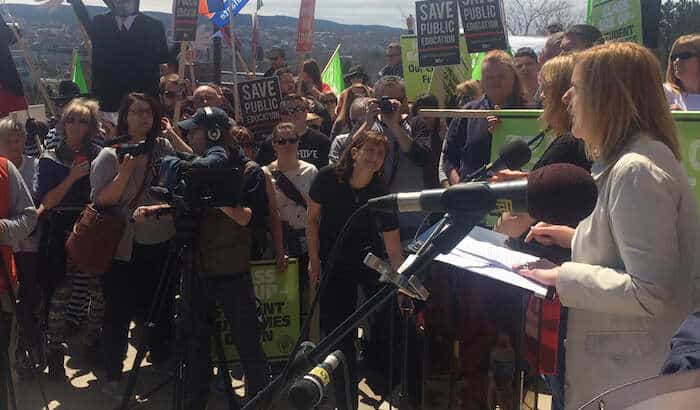 Time to close the wage gap
Women in Newfoundland and Labrador are more likely to be university educated and substantially more employed than men in the province, yet face higher rates…

Open letter to Paul Lane
"Your decisions Wednesday have stoked the flames and given the movement courage and hope."