Colonialism in the justice system: Who’s to blame?

When it comes to Inuk land protector Beatrice Hunter’s shameful treatment, everyone is trying to pass the buck — including those who bear ultimate responsibility.

As supporters of Beatrice Hunter continue gathering daily outside Her Majesty’s Penitentiary in protest of the incarceration of the Inuk grandmother and land protector, they join many throughout the province in wondering: Where do we direct our outrage over Hunter’s treatment and the sustained and intensifying levels of colonialism perpetrated on Labrador?

On Saturday, Premier Dwight Ball issued a statement to The Independent saying it “would be inappropriate for me to insert myself into the functions of the Court or to state any opinion on a matter that is currently before the Courts.”

The premier is both right and wrong. It would indeed be inappropriate for him to “insert” himself into the functions of the court, for instance by demanding that the court do what he says. The court is independent from the executive branch of government.

But that doesn’t mean he must be silent on the matter.

Citizens and the general public have every right to state their opinion on matters before the courts, and on the decisions of judges. If they disagree with particular decisions, they can say so. It is however generally frowned upon for members of the executive branch of government (premier, prime minister, cabinet ministers, for instance) to criticize judicial decisions. That’s because they’re the ones who appoint judges, and for them to criticize what is supposed to be a branch of our democratic governing structure independent from government risks undermining democracy by sending a message to other judges that they should do what government wants. And that is a fast track to undermining democracy.

But judges are not intended to be the last word in our society. It would be incredibly stifling to democracy if they were. So, if the premier cannot intervene directly into the matter at hand, who can?

The court is enforcing the injunction filed by Nalcor Energy, who is overseeing the construction and operations of Muskrat Falls. Nalcor initiated the process which has resulted in Beatrice’s imprisonment. Nalcor could drop its charges.

So those who are opposed to Beatrice’s treatment, and to the colonialism being practised on Labrador, should target Nalcor.

But wait now, Nalcor is a crown corporation. So, ultimately, who is in charge of Nalcor?

The provincial government. And despite the fact government has been widely criticized for giving Nalcor more power than most crown corporations enjoy, I can find nothing suggesting government has abdicated all of its authority over its wayward child. And so we return to…Premier Dwight Ball.

So yes, it turns out that Dwight Ball can intervene in this process. Premier Ball can exert influence—lobby, demand, legislate, threaten to cut funding to—Nalcor, the crown corporation which filed the injunction, laid the charges, and which his government is ultimately the boss of.

It bears reminding that government and Nalcor are not hapless bystanders to the workings of the justice system. The prosecution of land protectors has not been a matter of blind justice, but has been quite selective.

Take for example Nalcor’s decision to “convince a judge” to drop charges against Dorothy Michelin, a 96-year old woman caught up in its web of repression in November 2016, which garnered the corporation some seriously bad press. Or its decision to drop charges against hunger striker and high profile Inuk artist, father and land protector Billy Gauthier. Or the fact that NunatuKavut leader Todd Russell—who is currently negotiating a land claim agreement with Canada and the province—has not faced any charges, despite his deliberate public violation of Nalcor’s injunction on Oct. 18 (after ripping up the injunction at a press conference the day before).

Insofar as Andrew Parsons is the Minister of Justice, he can exert some influence as well. In fact, the government has a positive obligation to exert influence, if only to act on the Calls to Action of the Truth and Reconciliation Commission (TRC), which include among other things a commitment “to eliminating the overrepresentation of Aboriginal people in custody,” and to “provide sufficient and stable funding to implement and evaluate community sanctions that will provide realistic alternatives to imprisonment for Aboriginal offenders and respond to the underlying causes of offending.

The TRC’s final report also compels all levels of government “to commit to the recognition and implementation of Aboriginal justice systems in a manner consistent with the Treaty and Aboriginal rights of Aboriginal peoples, the Constitution Act, 1982, and the United Nations Declaration on the Rights of Indigenous Peoples, endorsed by Canada in November 2012.”

But equally pertinent, Parsons is also a member of the Liberal government, which is the boss of Nalcor, which is responsible for the injunction and the charges.

Ball isn’t supposed to criticize judges, but he can change the law

The premier and cabinet ministers may not be supposed to criticize judicial decisions, but they write the laws that the judiciary enforces. So there’s plenty that they could do, if they choose. Legislation takes time, to be sure, but the sustained silence of our legislators on what is clearly a terribly flawed outcome is unacceptable.

Ultimately, of course, all of us non-Indigenous folks bear some responsibility for the colonial nature of our courts and legal system. And there have been some initial efforts made toward acknowledging and rectifying the colonial nature of those structures. But some of us have more ability to effect change than others.

The notion that members of the public should not express opinions on court matters, or the rulings of judges, is nonsense. It’s put to rest nicely by this recent statement from the Provincial Court of British Columbia titled How to Criticize a Canadian Judge. The main point is, be critical without being insulting, and without criticizing democracy:

It is important for people to consider and discuss how the courts perform their role, and criticize if they wish, just as they discuss and criticize the performance of the other branches of government. Judges can’t have thin skins – their rulings affect people in important ways, and their decisions will seldom please everyone.

Similarly, in 2014 Huffington Post media critic J.J. McCullough criticized a series of Supreme Court of Canada rulings, arguing they reflected “not legal principles, but subjective political and social opinions. It’s perfectly fine to find fault with them… What we most certainly shouldn’t do…is deify the Court, nor pretend it’s recent rulings have been anything other than controversial, contestable, and — in many cases — just flat out bad.”

Both of these reflections provide the example of U.S. President George W. Bush’s famous statement, in response to a court ruling against the government on the issue of Guantanamo Bay prisoners’ rights: “We’ll abide by the court’s decision — that doesn’t mean I have to agree with it.”

So we have yet to get any indication—does Premier Dwight Ball agree with Nalcor’s colonial actions in Labrador? Does he agree with Beatrice’s imprisonment?

The Provincial Action Network on the Status of Women issued a very thoughtful and respectful opinion criticizing Beatrice’s imprisonment. They stated in part:

The Provincial Action Network on the Status of Women (PANSOW) is issuing a statement of concern that the human and cultural rights of Beatrice Hunter are not being upheld and we call on Justice Minister Andrew Parsons to ensure the politicized nature of the charge does not prevent her receiving just, culturally appropriate and human rights based treatment while incarcerated.

We ask Justice Minister Andrew Parsons to provide oversight and safeguard the human rights of Beatrice Hunter during her incarceration and subsequent trial.”

Clearly the justice system is flawed. It has not responded appropriately or fairly to those who have demonstrated their objections to the Muskrat Falls project and been charged as a consequence. There is little or no indication the justice system has respected nor taken into account the Indigenous perspective and issues central to this situation. In so doing, the system has inflicted undue harm on individuals, families and communities.

Labrador Liberal MP Yvonne Jones also carried out a much more appropriate and thoughtful response to the situation than Premier Ball. She acknowledged that while she couldn’t intervene in the independent judicial situation, she could express an opinion, and she did:

[Beatrice] is a mother and grandmother who was standing up for her beliefs, without causing harm or damage to others and her detainment is unfortunate. Each time I hear of incidents like this, I am upset and feel an absence of fairness for Labradorians…I am concerned that having Beatrice placed outside of Labrador also means she has no access to family support. It is in times like this that all people need family support… I too, have asked that all of these charges be dropped through requests to Nalcor and the Province over the past few months.

And so we are led back once again to the man of the hour, Premier Dwight Ball, who, it bears mentioning, is also the self-appointed Minister of Intergovernmental and Indigenous Affairs. He could exert influence—not on the court, but on Nalcor—yet he hasn’t. He could express an opinion on Beatrice’s imprisonment, and on Nalcor’s colonial actions, yet hasn’t.

The inaction of Premier Dwight Ball on this matter raises significant questions.

First of all, why has the Ball Government been so sloppy and inactive in its handling of the situation? Hunter’s treatment has done serious damage to the reputation of this province, and brought national and international outrage to bear (once again) on Newfoundland and Labrador’s shameful treatment of Indigenous Peoples and communities.

In a similar vein, the ongoing case against the editor of this publication, Justin Brake, for his coverage of the Muskrat Falls occupation last October has also pitted the provincial government in the role of a national villain, pursuing a court battle whose outcome could result in serious restrictions on freedom of the press and the public’s right to know in this country. This battle has also sparked national and international outrage.

The Ball Government has, arguably, managed to damage the reputation of this province to a degree unparalleled in recent history.

The fact that Premier Ball has taken no action on these matters suggests he is incapable of taking action—that he is not really in charge of the situation.

So who is in charge? Who’s really running the shots in this province, as the world turns its disgusted gaze on us? And who within Nalcor has the power to drop the charges?

Obviously CEO Stan Marshall, and Vice-President for Muskrat Falls Gilbert Bennett (who submitted an affidavit on Nalcor’s behalf when applying for the injunctions) hold some decision-making power. Who else? The individuals holding responsibility in this disgraceful scandal need to be identified, called out, and held to public account.

It is unlikely the land protectors currently facing charges will be the last. Already Nalcor’s heavy-handedness has had the result that repressive measures always have—strengthening the resolve and determination of its opponents, and those fighting for their freedom and their rights.

The charges filed by Nalcor, and the morally reprehensible, repressive, colonialist injunction on which they are based, must be dropped.

Ultimately, the buck stops at Premier Dwight Ball. He could facilitate Hunter’s release by making Nalcor drop the charges and rein back its colonial aggressiveness in Labrador. For that matter, he could bring the entire sad, wasteful, destructive, colonialist, shameful Muskrat Falls project to an end.

What’ll it be, Premier Ball? 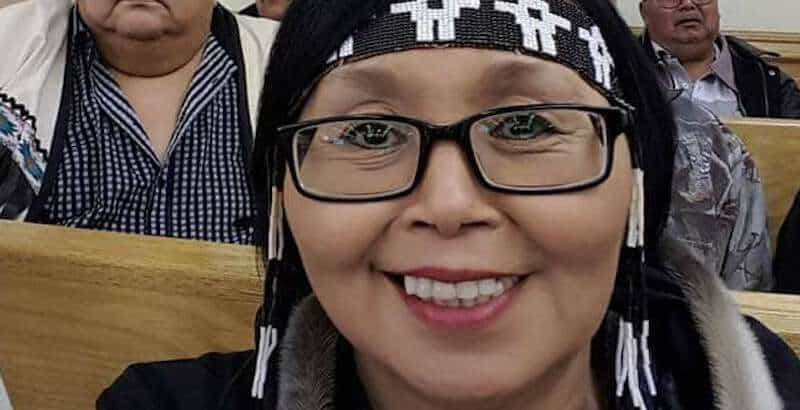 I choose not to be assimilated and oppressed: Beatrice Hunter
Inuk grandmother and land protector speaks out from Her Majesty’s Penitentiary. 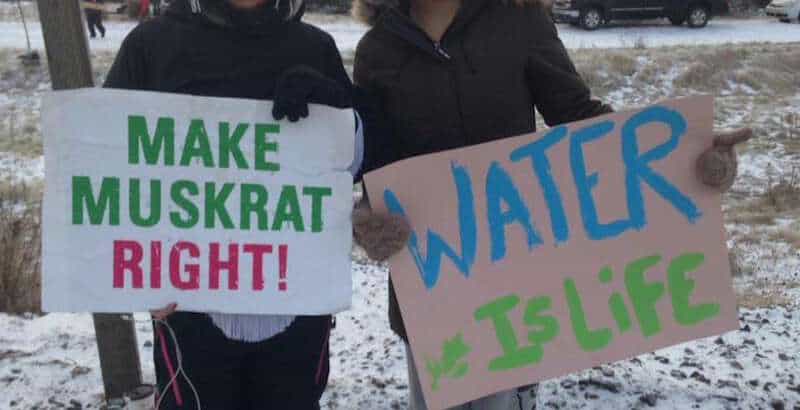 Amnesty International investigating Beatrice Hunter’s incarceration
Province, federal government and Nalcor all have a hand in the incarceration of the Inuk grandmother and land protector, says Amnesty spokesperson.