Havin’ a time (not getting stabbed)

There’s a growing dissonance between our image of ourselves, and the reality

You’ll never guess what happened to me today!

So after I got up and took a jaunt up to Signal Hill for sunrise, and after having a dose of bagels for breakfast from the Georgetown Bakery, I sat down for my morning coffee and a smoke. And then I realized: I’d forgot my lighter. Happily Rick Mercer suddenly sat down on the bench next to me and I said ‘Rick ole buddy give us a light,’ and he did! ‘Thanks buddy’ said I and then I went to that cool alleyway by my house (the one that’s scheduled for graffiti removal by the city) and unlocked my bike and took a bike ride around town and then went for another walk up Signal Hill because it was so sunny – it’s ALWAYS sunny in St. John’s, sure! – and then I went for a drive in my brand new jeep out to the ocean where the sky and soil were the colour of an acid trip. Then I went to George Street, which was of course swept tidy and clean and where pretty colourful banners fluttered in the breeze, and then I went for another walk down another alleyway of graffiti that the city’s trying to remove, and went for a coffee. Of course they were giving free fiddle lessons in the coffeeshop, so I learned how to play a few notes, and it made me feel so good that I took a quick spin out to pet some whales followed by a quick hang glider flight over the city and then out onto a boat to check out an iceberg. Then I was gonna go back to the coffeeshop to learn some more fiddle, only Alan Doyle stepped out from an alleyway and sketched me right out since he hadn’t shaved or cut his hair since he was in that Robin Hood movie, so I turned around and went to that other coffeeshop, the one where they’re always having the free open mic accordion jams with Kelly Russell. Then I went up to The Rooms for a bit (I thought it was free day but that’s only Wednesday nights so I had to use my last $7.50) and admired the sunshine. Some people complain that it’s too sunny in St. John’s but not me, no sirree. Anyway then I drove back down to Water Street and found a parking spot RIGHT OUTSIDE the restaurant I wanted to eat in (I’m some glad it’s so easy to find parking down there!) and then after frolicking in the grass at Bannerman Park and a quick round of golf I was a bit hungry so I went for some lobster, wine, lamb and sushi and then decided to catch a game of hockey and there I met Allan Hawco who came back up to the house for a beer and we started a jam in the shed and finished up the night on George Street.

What you don’t believe me? Look it’s all documented right here!

Ok, sarcasm off. This is actually a really well made video. It’s part of the recent wave of tourism marketing videos that have been produced in the province, by the provincial government and other tourism-related agencies and companies (this one by Destination St. John’s). And kudos to the very talented crews making these films – they’re stunning and wonderful. In fact, they’ve really become more like short art films rather than tourism videos. But they work. Mainlanders are stunned when they see them (I know several who’ve been inspired by them to come visit). They’re equally important to Newfoundlanders and Labradorians living abroad – I’ve spent many a party in Toronto/Montreal/Halifax/Asia where the YouTube gets hauled out and each and every video gets watched.

But sometimes you have to wonder about the image being presented. Judging by this most recent one, you’re just as likely to have Alan Doyle ask for a light from a doorway, or run into Allan Hawco at the corner store. Walk into a café and you’ll see Sean Panting belting out the tunes; in this Newfoundland fantasy world George Street is clean and bright, the sun always shines and it never rains.

…in this Newfoundland fantasy world George Street is clean and bright, the sun always shines and it never rains.

(I think some may actually be internalizing this: a friend of mine from California was recently asked several times downtown whether he was Alan Doyle. We attributed it to the fact he needed a haircut and hadn’t shaved in several days)

Well, there’s nothing wrong with a bit of fantasy, nor with some rightfully placed pride in the place we’re from and the place we love. But the danger comes when we start believing this image uncritically and allow it to supersede the reality that is actually around us.

On the other hand, it might be the Apocalypse

I contrast the video with a recent discussion thread that erupted on a friend’s Facebook. It began with my friend expressing outrage at a recent incident which saw some dunderhead spray downtown patrons with bear spray. ‘Where are we?’ she asked. ‘Were we better off as a “have-not-province”??? WTF??’

The litany of responses to her post was telling. Some thought she was overreacting, but many agreed. Here are a few choice excerpts from the responses:

It’s scary to think that I feel safer walking the streets in Manhattan (even at night), more so than this city. It keeps getting worse.

Our little rock is going to change and not only in a have way.

NL government is not ready for the social destruction they are soon facing. Get ready. I’ve seen it. It’s not pretty.

It’s also not just drinking and partying… it’s convenience stores and pharmacies being held up or homes being broken into. There have been two random stabbings in the past year.

Watching the drugs take over is heartbreaking. I don’t feel safe downtown anymore either.

I have watched St. J’s grow at an alarming rate and the infrastructure just cannot keep up. Each time I go back there, I like it less and less.

it was easier…to get ecstasy in jr and high school than it was to get weed for crissakes. . . so i feel (from experience) that st. john’s has gotten worse in overall sketchiness, drugs, intensity of bullying, etc

Well, you get the idea. Quite a contrast in images, hey? So which is it? Do we live in a happy fantasyland where smiling couples brunch every morning over sushi and wine, the sun always shines and there’s an Allan Hawco around every corner? Or is downtown a drug-ridden nest of violent thieves? Is it safe to walk out the door? When you step onto your porch, will you find Rick Mercer delivering your paper and coffee? Or will you get stabbed? When you walk down George Street, will accordion-players serenade you and stepdancers twirl about you? Or will you get jumped from behind and robbed?

Well, the split identity is one worth dwelling on. After all, the video wasn’t really made for those of us who live here (proud though we are of the place). I’d be surprised if any of those brilliant musicians depicted in the videos earn enough to eat at the restaurants also depicted in those videos with any degree of regularity (thanks to our province’s below average annual incomes and underfunded arts programs). There are two Newfoundlands, and it’s important we not allow the fantasy nature of one to cause us to forget the grim reality of the other (nor must we allow our fear over the second to overcome our love and devotion for the first). While art and music and beautiful nature are indeed everywhere to be found – and always have been, even before there was a tourism industry or oil wealth – there are also growing problems.

Of course, the point is not to become panicky and hysterical and lock ourselves away. I’ve been in far worse parts of the world. But there’s something much more visceral about watching the paint peel from your own home; about watching your neighbours afraid to let their children play at the neighbourhood park you grew up in; about watching your friends in hospital, stitched up and requiring reconstructive surgery the day after they’ve been jumped by random chowderheads high on pills. That’s the sort of thing you take personally.

Most importantly, it’s the kind of thing that we must not become resigned to.

The fact is, wealth creates problems. And those problems can be dealt with, but not without a plan. The dramatic clash of incomes, sudden shifts in aspirations, greed, desire and jealousy all create social problems, even for a fantasyland where Allan Hawco is lurking around every corner. And we need a government that’s prepared to deal with it. Sudden increases in GDP and in corporate profits must be equaled by public spending on public services: on libraries, parks, recreation programs, social housing, arts and cultural programming, public schools. Greedy real estate agents and landlords must be reined in by rent control, mandated affordable housing development and government-supervised, democratically-designed land use plans. Wealth in must be matched by spending out. If our government can’t afford it, they need to do what every government does when it can’t afford to do the things it needs to do: raise taxes. Not for you and me, but for the people who are benefiting from all the new-found wealth (you know, the ones erecting those disgusting eyesore mansions in every oceanfront community within commuting distance of St. John’s).

Might that drive away the developers (and speculators and dealers)? Well if it does, good riddance really. We’ve always had our music and our culture and our natural beauty. We’ve always had each other. I’d rather the other problems go back where they came from if we aren’t able to achieve the sort of balance that makes new-found wealth work.

But I think we can achieve the right balance – if we have a plan, if we collectively work together, and if we have a government that isn’t so bedazzled by pie charts and corporate corpulence that it shirks its responsibilities to the actual people of Newfoundland and Labrador. It’s fine to admire ourselves in self-gratifying tourism videos like the one above. But without a plan, without hard work, without the willpower to put wealth creation on the backburner until and unless we have the social infrastructure to cope with it, the Newfoundland and Labrador depicted on those videos will quickly disappear.

Now if you’ll excuse me I must put on my sunscreen and hurry down to Tim’s to finish my Scrabble game with Rick Mercer. I heard Danny Williams will be hosting a tin whistle jam and then cooking toutons for everyone, if you want to join us. 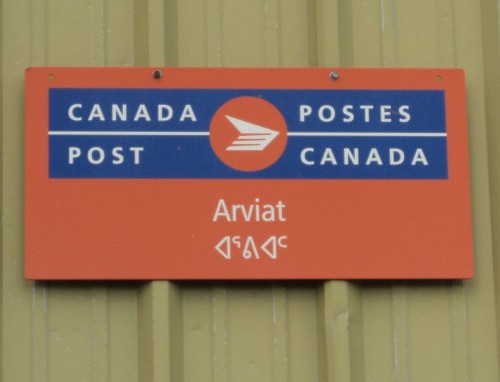 The Logistics of Northern Living, Part II: Living Off the Internet
The internet plays a special role in daily life in the North

A literary feast under the Table(lands)
Writers at Woody Point literary festival showcases authors and musicians from Newfoundland and Canada in the heart of Gros Morne National Park. With files and…