Lament for a donut

What donuts can teach us about Canadian nationalism, neoliberal globalization, and hope for the future

I made a terrible discovery last week.

I had, for some time, been craving a donut.

Not just any donut, mind you. THE donut. The real deal, one might say.

The walnut crunch, in all truth, is the only donut that makes a trip to Tim Hortons remotely worthwhile. Or even justifiable, really (unless one has awoken to a broken coffee maker, as I have, no less than twice).

Oh sure, there is the sour cream glazed, a dose of strength when you need a pick-me-up at work. Or even the chocolate glazed, should there be no sour cream glazed, and assuming you’ve either already had dessert or are merely stopping in for something to tide you over on your way to evening cakes. There’s even an acceptable mood for a fritter, that spurious desire for a dose of sweet jelly encased in half-baked batter, when you need a bit of sour-sweet juiciness and are stuck far from civilization — in an airport, say, or somewhere in the steel wasteland of Toronto’s Financial District.

But in the absence of other mitigating circumstances, there is only one donut that justifies a trip to Tim Hortons (barring, as I’ve said, an emergency ‘coffee’ run—and I use the term loosely). And that is the walnut crunch. A true cake among donuts; a brownie in proletarian disguise; an exquisite bar of chocolate batter in which one can lose oneself for a delightful 10 minutes during which each bite of sweet nutty chocolate only raises the bar for the next.

Oh wait. Did I say there is only one donut of such calibre?

I meant there was.

This was my sordid discovery, on the night of February’s full moon. I’d been craving a walnut crunch for some time. And each time I popped into Tim Hortons during my journeys, I shook my head, remarking on my—remarkable—bad luck in apparently always arriving at the very moment there were no walnut crunches on hand.

It never occurred to me there might be something more malevolent afoot. After all, some evils are just too evil to anticipate. No walnut crunches at Tim Hortons? That would be like Burger King ditching the Whopper. KFC firing the Colonel. Swiss Chalet introducing organic free-range chickens.

But this time something felt different. I’d been to two Tim’s in rapid succession, and no walnut crunch at either. I proceeded on to a third. Still no walnut crunch. I suppose I could have asked, but the poor staff looked harried enough. Lineups to the door, under-staffed, managers glaring over their shoulders. What was my need for a walnut crunch in the face of such surfeit of suffering?

So I picked up a bar of discounted-yet-still-overpriced imported marzipan at Winners and went home.
When I got home, I decided to investigate further. I entered the Internet. I began searching the Google. And lo and behold, a doughy nightmare incarnate unfolded before me. CTV News informed me (shame on CBC for ignoring the most salient Canadian news story since Confederation) that the walnut crunch had been consigned to oblivion. Discontinued as of February 2014.

One nation, one donut

In 1965, Canadian philosopher George Grant published one of the most remarkable and profound books in Canadian intellectual history. Titled Lament for a Nation, he wrote it in a fit of anger, fury and despair following the defeat of John Diefenbaker’s Progressive Conservative government at the hands of Lester Pearson’s Liberals in the 1963 federal election.

More than just an election, Grant argued that the Liberals’ victory represented the surrender of Canada to the United States (the book’s sub-title is ‘The Defeat of Canadian Nationalism’).

His interpretation of events was that Diefenbaker rode to power on a wave of populism, supported in part by small-scale Canadian businesses that felt threatened by large American corporations. The political positions of both parties, mind you, were very different in the 1960s—and in some ways opposite—to what they are now; Diefenbaker, a Progressive Conservative, appointed the country’s first female cabinet minister, first Aboriginal senator, passed the Bill of Rights, and extended the vote to First Nations and Inuit peoples.

But when the US wanted to give nuclear missiles to Canada to counter the growing Cold War threat posed by Soviet missiles, Diefenbaker refused. He said Canada had decided not to be a nuclear power, and that he would not allow American missiles on our soil. Outraged at Canada’s refusal to do their bidding, the American powers-that-be signalled to their supporters in Canada to do away with this upstart Conservative prime minister. Business leaders, the Liberals, and even the Canadian media ganged up on Diefenbaker in the 1963 election, and the Liberals came to power, ending Diefenbaker’s daring stand against American arrogance.

[D]ecisions affecting the Canadian economy and Canadian employment were now being made by people and corporate entities which were less and less accountable to Canadians.

So goes Grant’s reading of what happened. The long-term consequences of this, Grant argued, would be profound. He predicted that we as Canadians would never again truly stand up to the Americans on anything, and that this was the beginning of our absorption and conquest by America. This would happen first economically, through American control of our businesses and economy. Our unique cultural institutions—such as the CBC—would then also crumble. Eventually, we’ll just be one country.

It’s hard to say he was wrong. Indeed, some of his predictions and warnings sound incredibly prophetic. One of the ideas he said makes it difficult to resist this kind of cultural conquest is the notion of the inevitability of ‘progress’. People think that change means progress, progress means improvement, and therefore standing in the way of change is backward and ultimately doomed.

Grant would disagree — he ardently supported Diefenbaker’s refusal to allow the U.S. to use Canada as its tool in the Cold War. Not all changes are actually good changes, or represent progress and improvement. But as Diefenbaker’s defeat showed, it’s a difficult position to defend. In response, you face arguments like: “Oh, just give in to it — it’s the reality of the modern world and you can’t fight it.”

The counter-argument disguises itself as inevitable fact; in actuality it’s just another political ideology.

Grant’s book, while brilliant and fascinating on many levels, doesn’t really offer any solutions — he felt he was witnessing the defeat of Canada, remember. He concludes by noting he simply wants to mourn and honour the death of Canada, so that future generations can remember the end of this country that used to be strong and free.

Back to the donuts

In many ways, recent headline-grabbing financial news in this country (dead or undead) paints a picture of the process Grant outlined.

First, there was the Target scandal. In January 2013 Target announced its plans to roll into Canada. It absorbed 220 Hudsons Bay Canada/Zellers locations during its invasion (the remaining handful wound up closing in the face of this steamroller). The only people who raised warning flags were Canadian economic nationalists concerned at seeing an American company absorb an important Canadian chain, and labour advocates who were worried Target wouldn’t uphold union shops and labour gains made by Zellers employees.

Then there was the 2014 purchase of iconic Canadian coffee-and-donut chain Tim Hortons by U.S. burger chain Burger King (owned in fact by a Brazilian company). Fears of layoffs were brushed off and the Canadians were reassured their jobs were safe. Until last month, when the layoffs of 350 staff were announced. Now, there’s no indication that the buyout was a factor in the elimination of the walnut crunch (although I have my suspicions). But there’s little doubt it was a factor in the elimination of those hundreds of jobs.

These are just a few recent high-profile examples of a larger trend: Canadian companies being purchased by larger corporations from abroad. The problem with this, as Grant noted all those years ago, was that decisions affecting the Canadian economy and Canadian employment were now being made by people and corporate entities which were less and less accountable to Canadians. And the failure of the Canadian government to exert any control over this process is also precisely what Grant predicted would come to pass.

The Canadian government would claim—like it did over those nuclear missiles—that the world changes, some processes are bigger than us, and we simply have to roll with them. In short, there’s nothing we can do about it. So much for the true north strong and free.

The inevitable march of history?

The idea of the inevitability of history was also challenged by another great Canadian scholar, George Woodcock. In his 1992 masterpiece The Monk and His Message: Undermining the Myth of History, Woodcock argues that there are no historical trends, that these are simply inventions of historians (and politicians) since many people feel overwhelmed by the seeming randomness of history and politics. As a result, they create “plausible fictions, constructed largely out of facts” in order to help “the human mind to penetrate the sheer disorder of actual process and existence.”

It is only inevitable if we believe it to be, and thus give in to its self-contained logic instead of rising to oppose it.

In short: nothing is inevitable. No trend is too big to stop or turn around. He draws on examples from the Persian Empire, the Prussian state, the Napoleonic Wars, the Soviet Union, and many more, to point out that as often as people decided that a particular process was inevitable and could not be stopped or reversed, the most unlikely circumstances would result in precisely the crumbling or reversal of that process.

Perhaps it’s time we pay renewed attention to some of our own Canadian scholars, because these two at least demonstrate an important message: there are no inevitable trends in history and politics. Even if the march of events might make it seem that way, these are simply “plausible fictions” which remain plausible only until somebody has the temerity to decide to stand up and oppose them, and send us down a different course.

This thought should not be a frightening one, but a reassuring one.

Globalization, neoliberalism, the buyout of Canadian companies by American-based transnationals — none of this is inevitable, and none of it will last forever. It is only inevitable if we believe it to be, and thus give in to its self-contained logic instead of rising to oppose it. Thus, their argument becomes not a message of despair, but one of hope. Canadians can demand a government that will say no to American monopolies, refuse corporate buy-outs and not turn its eyes away when tens of thousands of Canadian workers are thrown out of work.

The Canadian nation might have died, but it can be reborn. The only question is: who will take it upon themselves to do that? 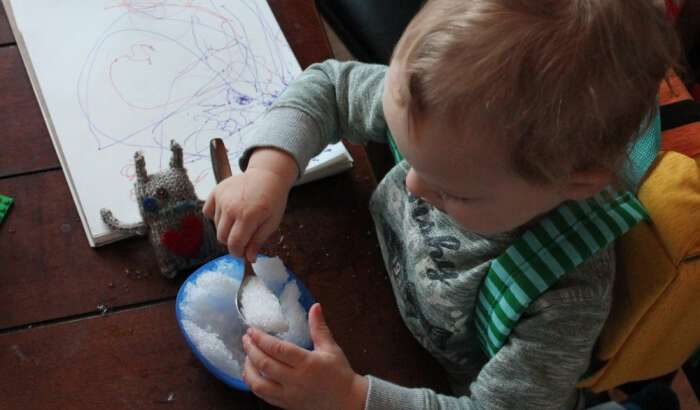 Children teach us more
Children hold more lessons for us than we could ever hope to imagine.