Muskrat Falls: Yes, there is a way out

We can and must cancel Muskrat Falls. It’s really our only hope.

Let’s review precisely how we got to where we are.

First, we were told that it was really the only way. The Holyrood Thermal Generating Station, which burns up to 18,000 barrels of oil a day in the winter months and is on its last legs, would need to go if we are to meet our greenhouse gas (GHG) emissions targets; we need a much cleaner and sustainable source of energy. So why not simply build a giant megadam in Labrador… again? Nalcor and the government told us it was the “least cost option,” though many rightly questioned that claim from the beginning, including the two independent bodies which the government commissioned to review the project. The government ignored those concerns, of course.

We were told Muskrat Falls energy could be sold to nearby provinces and states and help them meet their GHG emissions targets too. Win-win, right? It would only cost a few billion dollars up front.

The process was marked by rhetoric designed to coerce the skeptics and coax us into energy adventurism. Sly hints that we’d be getting back at Quebec for all the lost benefits of the Upper Churchill, that we’d be reversing our own sense of historical self as gullible fools. We’d show the world! We’d show them all!

That quickly changed. A few billion became a few more billion, and then suddenly it appeared the project wouldn’t even break even for the average Newfoundlander or Labradorian. Our energy bills would actually go up (this news was quietly rolled out, with impatient shrugs from the government, as though being concerned about it was somehow wrong and unpatriotic). The province would go deeper in debt, but still we would be able to sell energy to the U.S. and Eastern Canada, which would somehow benefit rich people in the province, which would somehow benefit us all. Or something like that.

More and more people were hesitating; frowning; skeptical. But those in charge claimed the balance sheet still tilted slightly to the positive, and since we’d already expended all this money and effort, we might as well keep going, right?

Well, that changed yet again. The even-more-billions became dramatically more billions, and our energy bills-of-the-future became even higher, and the whole thing looked terrible. Only by this stage we’d spent so much money, and the government and Nalcor had chained us into such terrible contracts, that it would be financially disastrous for us to continue — but even more financially disastrous for us to stop. So we might as well continue, right?

And then things got even worse, believe it or not. While Labradorians and Indigenous communities protesting the development were arrested, detained and brushed off by rich white Island elites as inconsequential, suddenly a team of Harvard researchers came out with a study indicating that actually all those concerns were valid. What’s more, their research showed that unless the Muskrat Falls reservoir is fully cleared of vegetation and topsoil the project could very well poison Indigenous waters and communities and lands, in addition to costing the average Newfoundlander and Labradorian higher energy bills and putting the province billions upon billions in debt.

But by that point it was too late, Nalcor and the government told us, and still tell us even though those in charge of the project admit the whole thing is a “boondoggle”.

All the naysayers were right; all who had warned caution were exonerated.

The powers-that-be kept the wool over the public’s eyes long enough to spend enough billions that they can now claim, with perfect seriousness, that so much has been wasted we might as well keep going. “Cancelling is not an option,” they say, with heavy faces and frowns (disguising, perhaps, the inner mirth of some at how they had fooled us all).

And so we continue headlong into a project that is destroying this province’s future, jailing its citizens (those with the principles to protest), poised to kill a way of life for Indigenous communities that might never be won back (and possibly poison them as well), and selling us collectively out to transnational corporations that benefit from our collective tragedy.

So what can we do?

The ongoing scandal involving Ed Martin has received plenty of media coverage. Through some shady concatenation of corporate sleaze that has yet to be fully understood and revealed, the former Nalcor CEO galloped into the sunset with a $1.4 million thank-you card of public dollars for steering this boondoggle, and now his rich old fogey replacement Stan Marshall has a jolly contract, raking in hundreds of thousands in taxpayers’ dollars to do just the same sort of thing Ed Martin was doing. And he’s even pulling former colleagues out of retirement to share in the get-richer-quicker-scheme, at the public expense (so much for giving all of our well-educated and innovative non-retired people a chance in the workforce!).

But what is being done to seriously review the project? Fundamentally nothing.

A review of the project obtained through access to information requests by CBC revealed plenty of arguments for plowing forward, along with the typical panicky (and unsubstantiated) screech from Nalcor that stopping would cost more than continuing. It also revealed that Nalcor had failed to even consider the most fundamental reasons for stopping: that Muskrat Falls is a white colonialist aggression engineered by elites in St. John’s that will have devastating effects on Indigenous communities in Labrador.

Nowhere in the entire review was that even considered.

It would be hard to find a clearer indication of the white colonial racism of Nalcor and the St. John’s government.

There is a tremendously compelling reason to stop, and it is this: every step forward has thrust this province miles backward. This is consistent with what megaprojects have done to jurisdictions around the world. They breed corruption, devastation, and debt. Some publications were warning of this years ago. They have now been shown to be correct. When officials say, “Yes, we’re over-budget and behind schedule, but it would cost more to stop than to continue,” they are not factoring in that precedent shows we will continue to go even further over-budget and even more deeply into debt.

A pattern has emerged: things will be worse and costlier than we are told. Indeed, it’s the only predictable, observable rule that has been consistent. It is, therefore, impossible to even weigh the costs of stopping versus the costs of continuing—because the costs of continuing will continue to grow and grow. We do not yet know what they will be; every new month brings more unexpected costs and snags. But what we can say, with absolute certainty, is that if we cancel the project, we will have finally put a finite end to the debt and the waste.

But more significant is the fact that the cost of Muskrat Falls to Labrador and Indigenous sovereignty and security is incalculable. Every step forward taken by Nalcor is an aggressive, racist and colonialist act. Resistance is rising, and government is responding with growing repression. It is indeed time for people on the Island to signal their resistance as well. The good people of Newfoundland and Labrador do not want a government steeped in racism and colonialism, and they do not want this province’s future to be consigned to debt and poverty. It is time for all of us to take a stand against this project.

What can be done? The Truth and Reconciliation Commission that issued its report last year flagged 96 ways that federal and provincial governments can act to redress and reconcile Canada’s racist, colonialist heritage with its present situation and future potential. Based on this, the provincial government needs to go to the federal government, admit that Muskrat Falls was a colonialist project that should never have happened, and ask for the federal government’s help and leniency in cancelling the project. The federal government, if it is indeed sincere in its own commitment to honour the principles of reconciliation, and to respect the democratic will of the province, will then help us try to untangle the mess of contracts and loans in which the province has embroiled itself.

Whatever the outcome of that process, and whatever price we pay to free ourselves of the boondoggle, at least we will have put an end to the growing corruption and debt that megaprojects bring, and which we have seen all too vividly here in Newfoundland and Labrador.

Let [Muskrat Falls] serve as a monument to the moment we finally stood up and turned things around, rejecting the irresponsible and destructive energy adventurism of elites for a newfound sense of democratic and political maturity.

It’s not just a concern for Indigenous communities and people living in Labrador. Everyone in the province should be concerned. Government has claimed it will somehow shield the province’s residents from higher energy bills—but how? With money taken from health care, education and other social services? That’s no solution.

Most of all, if the project moves forward, it will forever serve as a continued symbol of our own gullibility and exploitation. Much the same as the Upper Churchill has served as an embarrassment for decades and for generations, fuelling an inferiority complex that already has a lengthy history here in Newfoundland and Labrador, so will Muskrat Falls serve as a glaring embarrassment to current and future generations of Newfoundlanders and Labradorians.

The fact that we fell for such a boondoggle, and that when we finally realized how terrible it was we also shrugged our shoulders and caved in to government’s seductive lies that it was too late to turn things around, will leave the next generation of Newfoundlanders and Labradorians and Canadians with the impression that we can’t get anything right.

But we can. Psychologically speaking, it is fundamentally vital for us to finally take charge of our own mistakes, and turn them around. To say that we are no longer going to sail along gullibly with what we are told, and that we are no longer going to let billions be poured into schemes that benefit only an elite handful at the top, while perpetuating misery across the province. It is imperative for our collective sense of self to take charge of this project and stop it, so that we can tell our children, and the world, that we finally stood up and did the right thing.

And what of Muskrat Falls?

The river can still be saved, and could even be developed as a tourist attraction under Indigenous stewardship—as a monument to a better way forward. Iceland’s Gullfoss serves a similar purpose; it was a hydro project that was halted thanks to the resistance of everyday citizens, and today it brings Iceland far more in terms of tourism than it ever would have in terms of hydro power.

Let’s develop a proper facility at Muskrat Falls to honour the heritage of the river, the important role it plays in Indigenous communities, and the sovereignty of the people of Labrador in determining their own future. Let it serve as a monument to the moment we finally stood up and turned things around, rejecting the irresponsible and destructive energy adventurism of elites for a newfound sense of democratic and political maturity. Let it stand as a monument to a better way—and it will serve as a shining beacon attracting the interest and appreciation of the world, as well as the pride of future Newfoundlanders and Labradorians.

At present, it attracts nothing but scorn and derision from all quarters.

It’s time to stand up and demand a change. The project can be stopped—all it requires is the courage, integrity and public demand to make it happen. 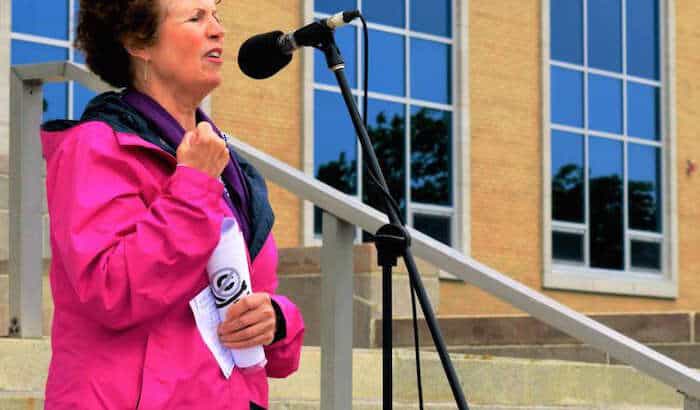 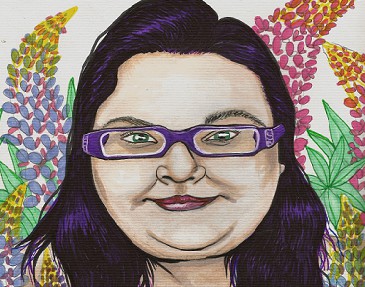 Dear Fatphobics
Fat people are just trying to live their lives one day at a time in the body-shaming society we live in.