Being a discourse on the dangers to modern society posed by single-brew coffeemakers (and those who use them).

I am, by and large, an ardent supporter of modern technology.

I think vaccines are the best thing ever. I dig Facebook. When we start colonizing Mars, it won’t be soon enough.

I am speaking, of course, about the single-brew coffeemaker.

I vaguely knew these things were popping up, but thought that so long as I ignored them – much like an annoying wasp, or Justin Bieber – they’d simply go away. But a recent article indicates my methodological approach to the problem does not appear to be working.

According to the article: “Single-cup brewing is the hottest and most lucrative sector of the coffee market nationwide, but it’s also producing massive amounts of trash.”

Yes yes yes, fine, if you’re into the nature there’s plenty of reasons not to use the machines, click the link and read about them.

But what is this about single-cup brewing being the latest craze? What in the world could compel people to develop a machine that brews not ten, not twenty, but ONE CUP OF COFFEE?! That’s akin to developing a single-person school bus. Or a unicolour box of crayons. Why would one even think up such an idea? Well, let’s examine the arguments.

Really now. There are some things one must learn to do in life. Skills that enable us to relate to each other and live harmoniously in a difficult and complicated world. Learning how to read and write, for instance. Conversing on the telephone. Tossing a salad. I may be a vegetarian these days, but I still know how to fry the perfect slice of bacon. There are some things you simply must learn how to do, even if you do not regularly do them.

Making a decent pot of coffee is one of those things.

Among the defensive comments responding to the above article, one person used The Child Defense – arguing that as a parent they didn’t have the time or luxury to brew a pot of coffee in the morning. But come on now. What’s the point of even having children, if not to train them to make coffee for you?

Sticking to the children theme for a bit, coffee is an under-utilized aspect of parenting. Take parents who give their children ‘time-outs’ for being bad, for instance. Or make them sit in a corner silently, meditating on the error of their ways and why they shouldn’t pour molasses into the dishwasher or give the puppy a bubble-bath with green food colouring and such. But disciplinary techniques like that contribute absolutely nothing to GDP! Instead, why not make them brew a 12-cup pot of coffee and reflect silently on their wayward ways until the coffee finishes percolating. Then not only will you have a docile and repentant child, you will also have a pot of coffee.

The thought of deriving your coffee from a plastic capsule might appeal to the same type of people who line up to try burgers grown from stem cells in a lab, but to most of us it is actually rather repulsive. Still, I can’t help but notice the growing effort to get us all to embrace what appears to be a much broader ‘capsule culture’. Take soft drinks. I was in a movie theatre in Toronto recently which has installed a terrifying monstrosity known as the Coca-Cola Freestyle Fountain.

What is it? Well if you’ve never been, it requires you to go get your own soft drink (but the vending staff who send you to your station pretend that they’re somehow doing you a favour by allowing you to make your own drink). You must first approach a gigantic, wall-sized smart screen. You press options on the touchscreen, and choose your preferred beverage (say, Coca-Cola). Then you select your preferred flavour (say, Orange. Yes, Orange Coca-Cola. Or Strawberry Sprite. Anything is possible with this technology!). Then you select your size. Then the drink pours into your cup.

Is this the future of beverages? From coffee to cola: little capsules that would function equally well on a space shuttle? It’s got a novelty factor, perhaps. But beyond that, little to justify its existence (unless you happen to be on a space shuttle).

I really don’t get why users of the single-brew machines drink coffee at all. Considering that one “cup” of coffee is really actually no more than one-quarter the size of a decent mug, a “12-cup” coffeemaker only produces 3 mugs of coffee which is barely enough to wake me up sufficiently to make my second pot. But then, I’ve never understood espresso cups (which I refer to more accurately as thimbles), hard candy or slicing a cake when you can simply eat the whole thing either.

Reflecting on the existence of single-cup coffee makers, however, has unleashed a minor rage in me that doesn’t merely stop at the sight of an inadequate quantity of coffee. There are other injustices in the world of materialist consumption as well.

I mean, sure they’re tasty. When – at those coffee shops I approve of – I’m given a stick of biscotti with my coffee, I eat it and enjoy it.

When, however, there’s a jar of thin little sticklets labelled “Biscotti – $2.50 each” I wonder at the sheer cupidity of this highway robbery (while slightly admiring the audacity of the hold-up).

Other things to watch out for: the other day I went for mussels with some friends. We ordered. “Would you like some fried bread with that?” asked the kindly waitress. “Fried bread?” I asked, marveling at the existence of a fried food I had never thought of frying before. “To soak up the mussel sauce,” she explained. Sheer brilliance! A mystery of science solved – what to do about all the delicious sauce that’s left over after the mussels are eaten! No longer would I have to furtively scoop it out with a spoon (or, worst case scenario, the mussel shell). Wowed by the delightful world this idea had opened up to me, I almost didn’t even notice that we were charged THREE DOLLARS AND FIFTY CENTS FOR FRIED BREAD.

I wouldn’t mind as much if they simply explained, “You can have this for three dollars and fifty cents extra.” It’s the implication that they’re offering something out of the kindness of their heart, so as to ensure we don’t miss out on an Important Experience (while lurking behind their kind words is the veiled threat that if we don’t do what they recommend we will be missing out on an Important Experience, and labelled as cavemen by the servers in their kitchen discourse). But then when the bill comes, we discover it was neither kindness, universal love, nor a desire to preserve our dignity in the eyes of other diners which inspired the kindly offer of fried bread: they simply wanted to charge us three dollars and fifty cents extra.

The same goes with dressing on your fish’n’chips. Or a slice of cheese on your burger. If you’re going to charge extra, be up front about it. Or don’t offer. How would you like it if, on a pouring rainy day, I offer you a lift when I see you trudging to work, and then upon arrival at our destination I demand you hand over $10 for gas?

Such things are, perhaps, an indication of greed trumping service in today’s world. But how do we make sense of the single-cup coffee maker? Isn’t big supposed to be better? How confusing it is that we’re supposed to purchase a 52-inch TV this year, in order to be superior to the owners of 48-inch TVs last year, and yet we’re supposed to transition from a “12-cup” coffee-maker to a single cup? That’s akin to going from a 60-inch TV to a 5-inch. How does that make sense?

Well, as we know there is no real sense behind capitalism beyond people trying to fool us into doing things that will make them more money. Why some people seem to admire this quality (and capitalism more generally) is beyond me: admiring people for money-making ideas is sort of like giggling joyfully every time somebody pours a bucket of water on your head. I admire people who find me money-saving ideas, not people who discover ways of charging me more for less. But in a world of single-cup coffee machines, anything’s possible I suppose. 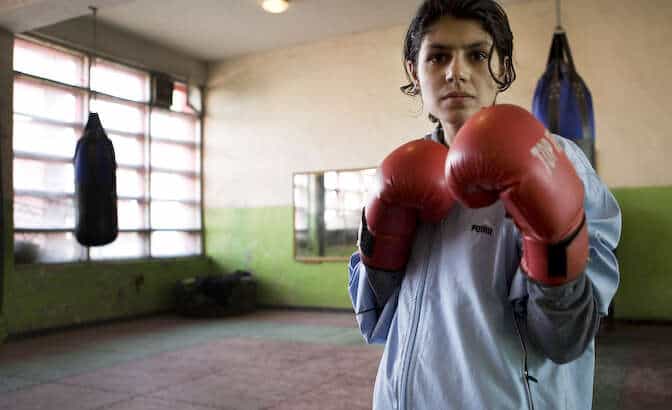 On the ropes
A pair of films from Newfoundland producer Annette Clarke explore the challenges and triumphs of women against different cultural backdrops.