Sometimes, going away brings us even closer to home

I stroll down to the harbour, the brisk North Atlantic wind whipping my hair and the fog rolling in over the waters, enshrouding the wooded hills on the far side. The sea-scented strands of granite-green waves bob just beyond where I stand, and somewhere up above the sun struggles to pierce a single ray through the perpetually cloud-laden sky cover.

And it’s only when I open my eyes and turn around, back on to the harbour to gaze on the city skyline, that I realize I’m not in St. John’s, however much it might sound and smell and seem like it. Instead I’m in Reykjavik, Iceland – another “island far away in other seas”, as the famous Newfoundland poem put it.

It’s funny how sometimes, being in a foreign place can bring your own home most clearly to mind. Iceland is such a place.

In downtown Reykjavik, an open walkway circles the harbour. On one side, the stylishly crafted stone bulwarks; on the other, the road and the end of the city. While downtown St. John’s struggles between those who want to keep the harbour open for everybody to enjoy and admire and access, and those who would allow it to be lined with ugly office buildings (nobody has managed to explain to me precisely why all the companies located downtown feel they need to have their cheap pre-fab office buildings right on the water, instead of a couple of streets back, unless what they really mean by ‘prime office space’ is that their CEO’s want to be able to look at the water and keep the rest of us from doing so), Reykjavik offers a much better model. The public walkway circling the harbour – and widely visible from other points in town – is open to cyclists and pedestrians strolling around their city, and many do: on weekends and in the evenings couples and families stroll along, staring out over the waters which share that dark greenish hue with our own shores. Statues and sculptures are dotted here and there, while the offices and commercial centres and public buildings –some of Reykjavik’s finest public buildings (not private offices) are located down there – are set back of the walkway. Across the harbour, the towering hillsides of Mount Esja lurk, often shrouded in fog, much like our own Southside Hills.

But near the core of the downtown stands a unique structure; unique only because it surprises me that we don’t have one. That’s the Reykjavik Maritime Museum: a public museum and tribute to the great history of fishing and seafaring which defines all island nations, especially those of us situated in the turbulent North Atlantic. Here tourists and locals alike can learn about, and take pride in, the fishery and seafaring which is their heritage.

As I stared at it, I couldn’t help but wonder: where is our national (provincial) fishery museum? Sure, there’s The Rooms, with its assorted displays (some of which touch on aspects of our seafaring heritage, sometimes) and the various smalltown museums scattered here and there throughout the province, but why don’t we have a central, focused museum honouring our seafaring heritage? Telling stories of the vessels and seafarers, of the shifts in our maritime industries and the role this has played in our history and culture? We have a railroad museum. Where’s our fishery and seafaring museum?

The pride and centrepiece of the Reykjavik Maritime Museum, however, floats outside, in the harbour. It is the Coast Guard vessel Odinn. Why is this vessel so prominently displayed and kept in functional shape by the museum? As a symbol of Iceland’s battle against overfishing. Odinn played a key role in many of those battles, when from the 1950s onward small fishing vessels and the tiny Icelandic coast guard took on the full naval power of mighty countries like Great Britain. Visitors can see for themselves the astonishingly simple armaments of this vessel: the 57 mm cannon on the bow, and the greatest weapon of them all: the trawl warp cutter that it used to cut the nets of foreign fishing fleets. As Icelandic fishers cut nets and rammed foreign vessels, vessels such as this served on both the offense and defense, rescuing damaged vessels and stranded crews while also cutting nets and at times even ordering their crews to guns in the face of the overwhelmingly superior firepower of the British navy.

Here the Icelanders take pride in their battle to protect their fisheries – and in the fact that they won. It took decades – and a combination of direct action by fishers and political battles by their government – but by working together, the Icelandic nation drove off the foreign fleets and won their hard-fought battle.

Perhaps that is why we don’t have a Maritime Museum in Newfoundland. Perhaps if we had a government that stood up for its people; a navy or coast guard that protected the coasts with whatever force was necessary; and a government that really did treat the fishery as public policy, then our public policymakers would not be afraid to promote our maritime heritage with the pride that it deserves.

And yes, this was a dig. For the past several months the provincial government, the corporate bosses and even the CBC have been engaged in a bizarre gang-up project trying to push the line that ‘the fishery should not be treated like public policy’. Nothing could be farther from the truth. Hear this loud and clear: the fishery IS public policy. It MUST BE treated as public policy. The fishery is a public resource; the wealth it provides a public good and its profits – meagre though they are these days – must be used for the public welfare. What IS fishery policy if NOT public policy? Privatized corporate profit, that’s what. When somebody says “the fishery must not be public policy” what they really mean is they would prefer to sell it out to private industry so their corporate buddies can make whatever money they can off it. Such messaging is simple-minded and irresponsible. Our greatest problem is that the government is afraid to actually, fully, truly treat it as public policy – and allow our fishers and their communities the controlling role in setting policy – instead they try to compromise between fishing communities and corporate interests. Compromise is not sustainable, and that’s why we hear this assault on fishery-as-public-policy; they’re simply trying to lay the seed for the eventual selling-out of what remains of this public resource.

Iceland is evocative of Newfoundland in other ways. Further along the southwest coast lies Pingvellir, a massive and beautiful national park evocative of Terra Nova or Gros Morne. Indeed, the stark, rocky landscape dotted with ponds, stunted windswept trees and dramatic cliffsides could almost be mistaken for any scene on the northern peninsula (except for the still smoking volcanoes and continental rifts tearing the island apart; there is an aspect of the primordial to Iceland’s lovely, barren, windswept wilderness). This is the site of the ancient Icelandic ‘parliament’.

Similarities in scenery and weather aside, Iceland was – much like our own scattered bays and coves – populated by those fleeing the hardships, tyranny, poverty and oppressiveness of life in their homelands (especially those seeking to escape the heavy hand of Norwegian rule). The farmers and fishers and seafarers who wound up settling Iceland’s small communities decided they wanted no more of the tyranny of kings and autocratic governments and in 930 AD they established one of Europe’s oldest and most impressive democratic assemblies, which met once a year at this breathtaking occasion. Here, amid celebration and revelry and market festival, the free citizens debated laws and voted on policies to govern the island. Iceland’s independence finally crumbled in the later middle ages when it became part of Norway, but during World War II – just about the time we were giving up our independence – Iceland reasserted theirs. Today the government meets in Reykjavik, but Pingvellir – and the beautiful wilderness which surrounds it – is a national park visited by thousands of Icelanders and tourists every year; a stirring and breathtaking monument to freedom, and nature, and democracy.

Iceland has been recovering from its own financial crash far more quickly and creatively than any other European nation…its ability to do so was tied to the sense of cultural independence and pride that is visible in every direction you turn.

Indeed, Iceland has been recovering from its own financial crash far more quickly and creatively than any other European nation (arresting bankers and politicians responsible for the crisis, writing off household debt and sending international creditors packing; far from falling into chaos, their economy is now growing steadily as a result), and I’m sure its ability to do so was tied to the sense of cultural independence and pride that is visible in every direction you turn.

We have our own monument to democracy as well, although all too few of us are aware of it. If you take a stroll down through ‘Harbourside Park’ to the waterfront, you’ll see an array of benches and large displays. Take the time to visit it, and read through them at some point, if you haven’t already. They tell the story of Newfoundland’s democracy, and independence. It’s an extremely well-done display, and a lovely place to spend a summer’s afternoon.

But there could be more. The first time I saw the displays, I was torn. On the one hand, proud to see them. On the other hand…why were they squirreled away down here, with so little notice? There’s an element of them that almost seems hidden away. Certainly, they should be more prominently promoted.

…the entire stretch of the undeveloped waterfront should be designated Democracy Park – a living monument to our freedom and our proud, independent heritage…

In fact, the entire stretch of waterfront could very well be renamed ‘Democracy Park’. It’s perhaps no coincidence that the ‘Occupy Newfoundland’ movement set up their camps down there – there is something about the spot, with the wind and waves stirring the air and the freedom evoked by the scent of sea air all about, which draws forth a sense of liberty and independence. Before it gets swamped – squandered – for cheap hotels and ugly office buildings and condos – the entire stretch of the undeveloped waterfront should be designated Democracy Park – a living monument to our freedom and our proud, independent heritage – and built up with gardens, and more prominent displays about our heritage and our political principles. Statuary and sculptures could be concentrated in the area to promote the diversity of our heritage: not just the Irish and English and Scottish, but the Libyans, the Chinese, the Jews, and the many other waves of migrants who have helped to define the Newfoundland and Labrador of today. This would both preserve it for future generations, as well as help to promote our civic and political culture today. Cheapskate developers are pounding out cookie-cutter subdivisions every direction you turn outside of the capital: subdivisions that’ll either be ghost towns or slums 50 years from now, with no distinctive culture or creative quirks to give them soul. Is there no one willing to think big, about how our momentary ‘boom’ could be used to craft a city that will be looked at with awe a hundred years from now?

There are things to learn from the other island nations around us – especially those of the North Atlantic. Iceland has reclaimed its sovereignty and independence, but more importantly, it has reclaimed its soul. There are those who say we have ‘regained our pride’: will we, too, one day regain the spirit to dream grand visions, bring them to life, and build for eternity? 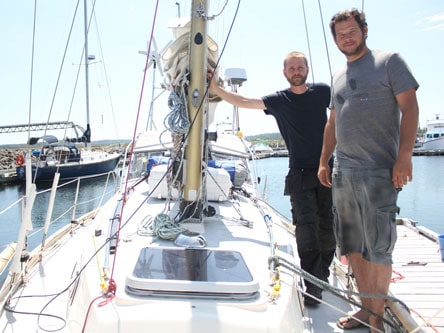 A maiden voyage of warming proportions
Three men set sail from Lewisporte on June 21 to attempt a previously unnavigable route through the Northwest Passage. If they become the first to…