Something awful this way comes

In the face of mounting evidence about exploitation of foreign workers, it’s time for our provincial government to take concrete action

Last summer I wrote an article about the use of Temporary Foreign Workers in this province, as part of a wider series on the changing labour market in Newfoundland and Labrador. As a province with a history of continuing underemployment, and the only province in Canada without any significant use of the federal temporary foreign worker program (which is used to import cheap temporary foreign labour instead of creating quality local jobs), all indications pointed to the danger that in a booming economy some local employers would take the cheapskate option: opt for boosting their corporate profits through use of temporary foreign workers instead of supporting their communities by creating decent quality jobs for locals.

Almost exactly a year later, news broke about the Quinlan Brothers’ fish plant in Bay de Verde, which began importing workers from Thailand to work there (despite the closure of other fish plants across the province and the continued underemployment of thousands of Newfoundlanders and Labradorians).

I wrote about that, too.

Now further evidence has emerged about the devastating impact of the Temporary Foreign Worker program and the way migrant workers are treated in this country. Headed up by Osgoode Hall Law School professor Fay Faraday and released by the Metcalf Foundation, the report – Made in Canada: How the Law Constructs Migrant Workers’ Insecurity – exposes not just shocking examples of the abuse suffered by migrant workers under the program, but also the widespread and systemic nature of the exploitation.

The report doesn’t mince words: “The exploitation is not isolated and anecdotal. It is endemic. It is systemic.”

Examples include workers whose pay was withheld illegally, who were paid differing amounts than they were promised when they signed on, who were forced to live and work in substandard conditions, and worse. Some of the examples sound more like indentured labour or slavery, than employment.

And just this week, news has also emerged that several employers in British Columbia are under threat of being blacklisted by the Mexican government for their treatment of Mexican foreign workers. Many foreign governments actively encourage temporary foreign worker programs with other countries: the money their citizens send home to their families provides a much needed boost to the local economy (even if it doesn’t create a sustainable long-term economy for the region, and even if it is accompanied by a host of devastating social consequences). For a foreign government to jeopardize such a relationship by publicly condemning Canadian employers sends a message about just how serious the problem is.

But there are things we can do

The report by Professor Faraday and the Metcalf Foundation does more than just expose the scope of exploitation occurring under the Temporary Foreign Worker program: it also provides some valuable recommendations for policies that provincial governments can implement to help mitigate some of the federal government’s failure to provide oversight (or, you know, leadership in general).

These are simple, basic steps our provincial government could take to protect the human rights of foreign workers…

These are simple, basic steps our provincial government could take to protect the human rights of foreign workers, whose status under the migrant labour programs means they’re exempted from many of the labour rights Canadian workers enjoy, and are therefore at greater risk of abuse and exploitation. These steps would also help to ensure that employers don’t sacrifice decent, quality local jobs for the sake of making a quick profit off foreign labour.

And these measures are not unheard of – the province of Manitoba has already implemented almost all of them.

Where is our government on the issue?

Use of temporary foreign workers is poised to take off in this province. In other provinces, it’s already out of control, and extremely difficult for their provincial governments to get a grip on the problem, even now that the scale of abuse, exploitation and negative economic consequences are emerging.

We are uniquely positioned to ensure it doesn’t go that way here in Newfoundland and Labrador. By passing strong legislation now – in the early stages – to protect the rights of foreign workers and to regulate and monitor how corporations use foreign workers in our local communities and labour markets, we can make sure that use of foreign labour is humane, just and equitable; and that it supports the building of our province and our communities in a way that accords with the values we believe in and hold dear.

The time is now for our provincial government to pass temporary foreign worker legislation.

In fact, the time was last summer.

Let’s get on with it. 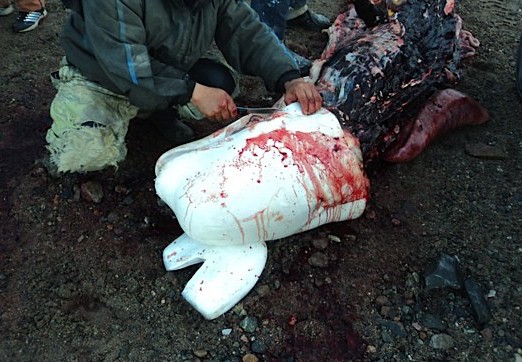 Food (in)security and the North
Note: 61st Parallel will be published every four weeks, instead of bi-weekly, to make room for Charlene Paterson’s new column “Remote Control”

Fighting words
Former Premier Brian Peckford talks about his book, his career and his legacy