The sun shines but briefly

A legacy fund could secure the future of this province. Why haven’t oil revenues been used to set one up already?

The other day, I had the misfortune to find myself at a book launch in Toronto.

I came at the behest of a friend, but my friend, being one of the organizers, was mostly too busy to chat. And, it being Toronto, nobody else was really inclined to chat either. As I stood by a wall, wondering whether the $3 drinks were worth the pretentious atmosphere, a stranger wandered up beside me and introduced himself.

“A Toronto friend!” I thought to myself triumphantly. “I’m in!”

“I hate this city,” confessed my new friend, who turned out to be from British Columbia.

“It has no soul, and nobody talks to anybody, and you can’t see the ocean,” he continued, happy to have somebody with which to share his sorrows.

I know just what you mean, I replied.

It turns out we had even more in common. One of his good childhood friends growing up in B.C. was a Newfoundlander: Philip, from Port-aux-Basques. Philip had moved into his downtrodden Vancouver neighbourhood at the age of 12, along with a wave of other Newfoundlanders, driven from their homes by the collapse of the fishery.

“Ours was a poor, working-class, immigrant neighbourhood,” my new friend explained. “No white people, until the Newfies arrived. None of them seemed to know they weren’t supposed to live in that neighborhood. But I guess they were as displaced as the rest of us.”

(Despite his use of the taboo word, I would be magnanimous and spare him for the time being. He was, after all, my only friend at the moment.)

“Don’t know… I suppose he went back to Newfoundland.”

“Philip was a scrapper,” the fellow went on. “He was a nice guy, would do anything for you, but when we made fun of him for being a Newfie – as we always did – he’d pound you.”

I knew the type.

“Philip gave me my name,” my chatty friend continued. “After we met, he invited me home for dinner. I tried to get out of it, and said his family wouldn’t be able to pronounce my long Indian name. ‘That’s OK b’y,’ said Philip cheerfully. ‘We’ll just say you’re J.D.’ And that’s my name to this day.”

I asked him what happened to Philip in the end.

“Don’t know,” the fellow mused. “I suppose he went back to Newfoundland.”

Judging by an article in Saturday’s Globe and Mail, you’d think he was right. “Welcome to St. John’s, the hottest job market in the country” it proclaims cheerfully, congratulating the province for achieving a 6.9 per cent job growth, compared to 1.9 per cent nationally, and driving unemployment in St. John’s down to 5.7 per cent.

It’s no accident that their congratulations are reserved for St. John’s. Meanwhile, fish plant workers on the Northern Peninsula are blockading highways in a battle with other communities for scarce work, and the union representing lobster fishers announced last week it would continue violating the law and selling to out-of-province buyers, since the provincial merchants continue scheming to drive prices as low as they can.

“And little wonder that those outside of the Avalon are so desperate. What the Globe and Mail doesn’t tell – but a little poking around StatsCan quickly reveals – is that while unemployment on the Avalon Peninsula did indeed decrease from April 2010 to April 2011, the unemployment rate increased on the South Coast, Burin Peninsula, West Coast, Northern Peninsula, and Labrador. And in all of these areas, it’s over 20 per cent.

But perhaps it’s inappropriate to talk doom and gloom while St. John’s is basking in the sunlight. After all, when the sun shines in Newfoundland, you don’t complain: you call in sick so you can enjoy it while it lasts. Because anyone who’s grown up in Newfoundland knows that the fog could roll in by evening, and that even with the sun blazing overhead, the storm clouds are never far from shore.

But what to do about it? There seem to be two main arguments presented about what Newfoundland and Labrador should do with all this new-found prosperity. There are those who want to spend it on infrastructure, education, health care: things to improve our communities, build our skills and position us for the coming storm. Then there’s the business types, who want to use it to further their own ends: reduce corporate tax, pay off the debt. The outcome of their strategy is more nebulous: beyond filling their pockets, it’s not clear how paying off the debt positions us for the end of oil, other than making sure we’ll be able to borrow more debt quicker when the day comes.

But between these two arguments, is a third course that urgently needs to be discussed. That is the matter of building a legacy fund.

If action is not taken soon, it will come to be seen as one of the unspoken tragedies of Newfoundland and Labrador’s oil prosperity, that a legacy fund was not created as soon as the first barrels started flowing. More commonly known as sovereign wealth funds, these are investment funds set up by national or provincial/state governments, which are often used to invest revenue generated by natural resource development. The interest which accumulates is used either to stabilize the economy when it slips, or held against the day when the natural resource will be gone. It makes far greater sense to invest revenue, and then fund provincial spending through interest that will renew every year, than to spend the revenue itself until it, and the oil that generated it, is gone.

Learning from others’ successes

There are at least 29 such oil-generated funds around the world, including Alberta’s (although Alberta stopped adding resource revenue to theirs in 1987). During its heyday, Alberta’s was so successful that it wound up lending money to other provinces.

One good example from close to home is the Alaska Permanent Fund. Established with an initial investment of $734,000 in 1977, the Alaskan government invested 25 per cent of proceeds from mineral, oil and gas sales and royalties. Today, the fund is worth over $28 billion.

The Norwegian Government Pension Fund is an even more dramatic example. It’s misleadingly titled, since it’s really an oil fund: a portion of state oil revenues are deposited and invested. Only started in 1990, it’s currently estimated to be worth $525 billion dollars. The Norwegian government estimates it’ll be worth $1,000 billion by 2019. And they even do it ethically: the government is not allowed to invest in tobacco companies, Israeli companies, weapons companies like Lockheed Martin, mining companies like Canada’s Barrick Gold, or Wal-Mart.

But if we want to ensure the fruits of that wealth cause the future to shine… we must think more creatively, and we must think of a future farther ahead than the next election.

The benefits are clear, for the day will come when the oil is gone, and what will we do then? Prosperity – like a sunny day in the hills of Newfoundland – is fleeting, and what will we do when it goes? It makes little difference to debate whether “peak oil” – the point after which oil production and revenue will start to decline – has been reached already, or whether it’ll come in 10 years or 50 years. The fact is, it will come. We’ve already spent much of that wealth – some of it very sensibly, to be sure. But if we want to ensure the fruits of that wealth cause the future to shine not only in St. John’s for a few years, but even upon the Burin Peninsula with its 23 per cent unemployment rate, we must think more creatively, and we must think of a future farther ahead than the next election.

We can begin that task now: the provincial election coming up in the fall will be an ideal time to challenge all provincial parties to commit to establishing a sovereign wealth fund – a legacy fund – that will ensure not just a few years of prosperity, but stability and security for generations to come. Indeed, even the federal government floated the idea back in 2008, and in a submission to the provincial government’s Minerals Working Group last month, Mining Watch Canada urged Newfoundland and Labrador to develop a sovereign wealth fund as part of a mineral resource strategy, against the day when our resources start to disappear.

Because the sun will not shine forever in Newfoundland and Labrador, nor will that sun shine equally over every portion of our land. To ensure that it does, and that it reaches every corner and secluded bay; every hidden valley; every shaded forest and every isolated island, we must use these gifts to build a future against the day when the storm will inevitably reach shore.

Otherwise, we could all wind up like Philip of Port-aux-Basques: lost in an unfamiliar land with only the dream of a sunny past to warm our hearts. 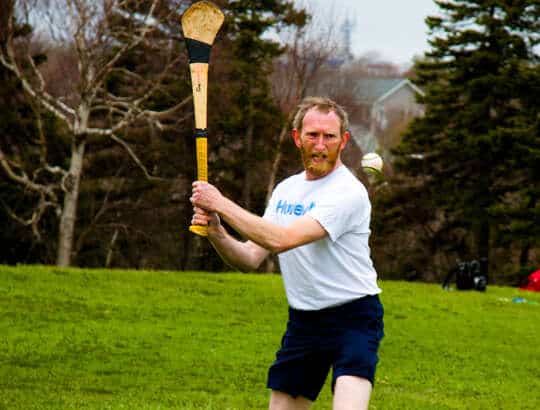 St. John’s hurling into the future
The Harps play their Irish sport on Newfoundland grass