The psyche-out: a venerable Newfoundland (and Labrador) political tradition

Well, the news is all abuzz following Frank Coleman’s ultimate psyche-out. Offered the premier’s seat on a silver platter, the hot seat turned out to be just a bit too hard for his bum-bum.

But let’s not be too put out. After all, the ‘psyche-out’ is a venerable tradition in Newfoundland and Labrador politics. Indeed, you might even say the province’s entry into confederation with Canada was the result of an extravagant psyche-out on the part of the British Empire. Our democratically elected National Convention decided quite firmly that confederation with Canada was not a viable option to be put on the ballot for national referendum, but the British colonial governor went and snuck it on the ballot anyway.

There have been numerous other examples of political psyche-outs in provincial history. Here are our picks for Top 5:

1. If I can’t be prime minister, nobody can!

Of course, prior to joining Canada we had prime ministers, not premiers. Perhaps there’s something more attractive in the former title; rather than running away from the position people sometimes went to extravagant lengths to obtain it.

Take Sir Michael Cashin, forefather of the venerable politicized Cashin family. Elected as a member of the Newfoundland People’s Party under Prime Minister Edward Morris, he really really wanted to be prime minister. When Morris resigned in 1918 (to become a British lord – obviously a cooler job) however, the prime ministership went to William Lloyd instead. In response, Cashin moved a motion of non-confidence against his own government. The newly minted prime minister – Lloyd – got up to speak to the matter, but according to rules of order could only speak to the motion if he seconded it. Lloyd thus became probably the only prime minister in the world to second a motion of non-confidence against his own government (to be honest, both Cashin and Lloyd tie for psyche-out distinction here). Either way, the ploy worked: the government was dissolved, reconstituted, and this time round Cashin was appointed to the top spot.

Initially elected as a member of the People’s Party (run by Edward Morris, his law partner), Squires in 1919 jumped ship to the Liberals (now calling themselves ‘Liberal Reform’) since they had a vacant leader’s position that he wanted (seems to be a pattern, hey?). After forming a coalition government with the Fishermen’s Protective Union (and with himself as prime minister), he was subsequently charged with corruption, faced a cabinet revolt, arrested and forced to resign. The government tried to continue trucking along, but Squires, out on bail, decided that was no good, and convinced four members of his own governing party to support an Opposition motion of non-confidence against their own government (Gene Long, describing this process in his book Suspended State, speculates it was an effort to stifle the criminal investigation into government corruption by confusing matters with an election. Good thing federal politicians don’t do that anymore, wha?). Whatever the reasons, it worked: the government fell and Squires managed to evade criminal charges. (His later career exploits involved getting successfully charged with tax evasion, getting elected prime minister again, surviving a riot against his government, and eventually going down in defeat to the United Newfoundland Party.)

Ah, Joseph R. Smallwood. One of the most colourful characters in Newfoundland politics also, of course, mastered the art of the psyche-out, although only quite late in his political career. After a 22-year run as premier, he finally agreed to resign in 1972 (after losing the election in 1971 – it took him several weeks to concede defeat, as he tried to figure out a way to rise above the hard-to-deny numbers). And then, under pressure from his party, he agreed to step down as leader and Ed Roberts – whom Smallwood had groomed to become leader eventually – took over. Only, Smallwood didn’t much like not being leader anymore, so when a leadership convention was held in 1974 he ran against Roberts – his former protégé – for the job. He didn’t get it, so he decided to run in the upcoming election anyhow, leading a hodge-podge group of defector Liberals and others under the brand of the ‘New Liberal Reform Party’. So much for resigning. Not that it mattered much: none of the Liberals (old or new) were to form the government, which was won by the Progressive Conservatives.

In the 1971 election which saw Joey finally lose the premiership, one of the unexpected wins went to the New Labrador Party. But it was a tied parliament, with the New Labrador Party’s Tom Burgess essentially holding the balance of power. Both main parties – Liberal and Progressive Conservative – immediately began courting Burgess for his support to form government. In his memoirs, Bill Rowe recounts that Burgess came to refer to himself as “the kingmaker”. In Rowe’s words: “There ensued a bidding war from both sides for Tom’s loyalties. Some realists on either side threw up their arms in despair: it was hopeless; you couldn’t buy Tom Burgess, you could only rent him by the hour, like a room in a sleazy hotel.”

After a couple weeks of this Burgess announced, on November 12 (the election had been held on October 28), that he would support the Progressive Conservatives. Then, on January 15, he turned on the PCs, complaining that he’d been promised a cabinet post that they hadn’t delivered. On February 2, Burgess crossed the floor to the Liberals (purportedly under the belief he’d get the coveted – and not-so-coveted – premier’s seat).

All the jockeying turned out to be for nought in the end: when the House opened on March 1 it was promptly dissolved, and in the ensuing election the PC’s won a strong majority. And the kingmaker lost his seat.

And then, of course, there’s Frank Coleman: the grocer-turned-politician who took the express aisle to the premier’s office. A candidate in what was at first a three-way race, he eventually wound up the sole person running for the job (one candidate was expelled for nasty Tweets, and the other dropped out claiming the race was stacked against him). The race wound down to a slow-mo victory crawl, which was reaching its final lap – with the leadership convention a mere two weeks away – when Coleman dropped out of the race as well (citing family reasons). 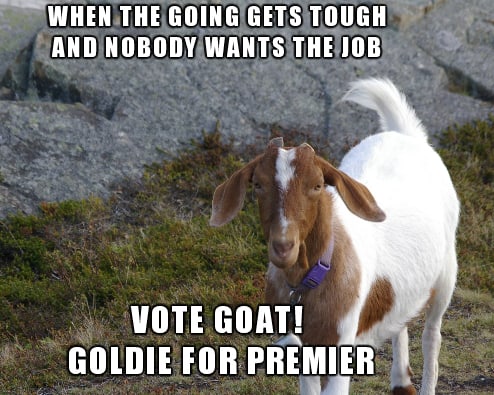 In all the chaos, there really is a silver lining
Life as a stay-at-home parent is not always what its cracked up to be