Organizations, unions, individuals join call for charges against Independent journalist to be dropped.

A number of individuals and organizations pledged their support to Brake, who is facing civil and criminal charges for reporting from the Indigenous-led occupied Muskrat Falls camp last fall in Labrador.

A growing number of journalists, press freedom organizations, unions, community organizations, and individuals are sounding the alarm that any decision against Brake in the courts would set a dangerous precedent in Canadian journalism and erode press freedom, which is constitutionally-protected under Canada’s Charter of Rights and Freedoms.

At Sunday’s rally the Newfoundland and Labrador Federation of Labour (NLFL) announced its support for Brake, as did the Provincial Action Network on the Status of Women (PANSOW).

“The NLFL, representing 65,000 union members and their families in every community in Newfoundland and Labrador, calls on the RCMP to drop all charges against journalist Justin Brake,” Ernest Green, President of CUPE local 488, read from a letter on behalf of the federation.

“On Oct. 22 Justin Brake did what any good journalist would do: he followed the story,” said PANSOW Co-Chair Janice Kennedy. “If it were not for his reporting we would have only had one side of the story, Nalcor’s version — a corporate entity trying to salvage a project that will harm our people and the land. Fortunately, Mr. Brake was able to report live from the site and we were able to see both sides of the story. This is what good journalism is about. As citizens of this province we have a right to know what’s happening at the Muskrat Falls site, and we can thank Justin Brake for bringing us the story.

As citizens of this province we have a right to know what’s happening at the Muskrat Falls site, and we can thank Justin Brake for bringing us the story. –Janice Kennedy, PANSOW

Mi’kmaq Elder and former Flat Bay Chief Calvin White also spoke Sunday, saying without a free press, “we’re not going to be able to have [the] knowledge to be able to make our decisions on what we stand for and hat we stand against.”

“Justin’s coverage gave voice to the minority and offered unending support and context to what was actually happening,” she said. “Far too often Indigenous issues are covered by one-sided perspectives and quickly passed over. Arguing technicalities of colonial-made laws and the arbitrary line in which [corporations] claim to own the traditional lands of the Indigenous Peoples serves only to further dilute the importance of the actual issues at hand, like Indigenous sovereignty and the freedom of journalists to document important and historic acts of defiance.”

Grenfell Campus Students’ Union President Sophia Descalzi told the crowd that “students condemn the criminal charges towards Justin Brake, as they are a violation of the democratic right of informing the public.

“We need journalists like Justin Brake and newspapers like The Independent to bring community issues to the front and raise public awareness,” she said.

A short statement from former Western Star Editor (and current Independent columnist) Ed Finn was read at the rally. In an email to Brake last month, Finn called the charges against the journalist “an outrageous attack on the basic freedom of the press, with all the implications for undermining one of the most essential rights enshrined in Canada’s constitution.”

Finn said “subjecting a journalist to this ordeal will be a black mark on Canada’s claim to be a democracy, and any judge or assembly of judges that would dare give a corporation’s profits priority over the exposure of its harmful activities by an enterprising reporter would throw our whole judicial system into disrepute.”

Subjecting a journalist to this ordeal will be a black mark on Canada’s claim to be a democracy… –Ed Finn, former Western Star editor

Michael Martin, a veteran, former journalist, former New Labrador Party MHA, and creator of the Labrador Flag, said Sunday the charges against Brake are a “much bigger [story] than Muskrat Falls. This story is about freedom.”

Martin expressed concern over what he said is a lack of public outrage, including from the journalism community in Newfoundland and Labrador.

“Without people like Justin, we’re lost. So all I can ask is that the people out in the communities who feel strongly about this — get on to your neighbours, get on to your friends, get on to your community and feed them the outrage. This is a disgrace and should not be allowed to happen.”

The Independent launched a crowdfunding campaign last month to build a legal defense fund for Justin Brake to fight the charges in court and protect press freedom for all journalists in Canada. So far the effort has raised almost $6,000.

Canadian Journalists for Free Expression is hosting its “Journalism Is Not A Crime” petition at CJFE.org, which calls for the charges against Brake to be dropped, a sentiment echoed by a growing number of press freedom organizations from Canada, the United States, and as far away as Ireland and Pakistan.

At the end of Sunday’s rally Brake told the crowd he had an “obligation and duty” to follow the story of the land protectors’ last-minute act of self-defense.

He also said any legal decision against him would enhance corporations’ ability to conduct themselves without public scrutiny, while at the same deteriorating press freedom and denying the public’s right to know.

“If journalists cannot report on important events that happen on private property, imagine the kinds of stories that we will not be allowed to know. This is Canada; we’re at risk of losing a very fundamental freedom right now,” Brake said, citing major ongoing stories across the country of land disputes and Indigenous-led resistances to hydro dams and pipelines.

Brake’s next court appearance, on the criminal charges, is scheduled for April 11 in Happy Valley-Goose Bay.

Watch the full video of the April 2 Rally for Press Freedom in Corner Brook. 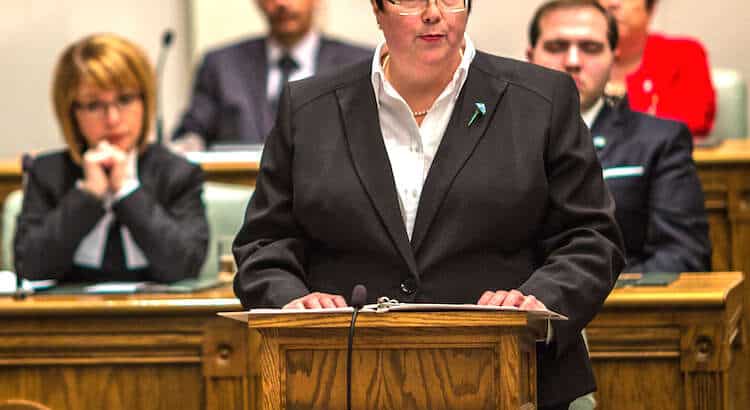 Anatomy of a Throne Speech
Liberals' Speech from the Throne indicates Budget 2017 will deliver more of the same.