My night spent at the southern end of Stage Pond was a little restless. I awoke in the wee hours to the barking and howling of coyotes. The sounds came from the direction of the ridge where I had seen the harem of caribou on the previous day. The ruckus worried me a bit, but they sounded far enough away. After returning to sleep I dreamt of coyotes barking near my tent. Again I awoke, and remained awake for some time, unsure if I had merely dreamt the sounds or had actually heard coyotes. I listened intently, but heard them no more.

When morning came it was cloudy, not foggy as I’d feared it would be. I eyed the western shore of Stage Pond, wondering if I should walk it or the road. A loon kept me company on the pond as I breakfasted.

After breaking camp I strolled along the dam to the desolate gravel pit at the absolute end of Horse Chops Road. At the far end of the pit stood a silver cross about eight feet high, decorated with votive lights and two metallic silhouette images of moose. Seeing this cross from a distance, I had thought it was an old telephone pole of some kind. Now I could see that it was in fact a monument to a deceased man, Brian Cullen, who according to the plaque died in 2008.

Having now had a closer look at the western shore of Stage Pond, I was convinced that it would be better to take the road. The tuckamore looked daunting: thick and unrelenting. I imagined a day of great struggle if I went that way. So the road it would be. I hoped to make the north end of Blackwoods Pond by evening.

I felt somewhat on edge as I took to the road. I wondered if I might encounter coyote. I kept an eye behind, but there was no sign of them, only a solitary duck flying north over Stage Pond.

The road kept mostly to the high and dry ground at the tops of ridges. There were great views of the barrens to the east, west, and south. I was now leaving behind the Northwest Brook watershed. Again I saw the Butterpots and windmills to the east, but closer now. What I could discern of the western shores of Stage Pond and Blackwoods Pond confirmed the correctness of my decision to walk the road. There seemed to be a great deal of tuckamore there, interspersed with great flat marshes tinted red by autumn. In the distance, beyond the low lands to the west of Blackwoods Pond, I could make out Molloy’s Ridge and Ragged Hill.

On this third day of walking I encountered a number of mobile camping units on or near Horse Chops Road. The first was located near the northeast corner of Stage Pond about 20 feet from the road. The careful way in which it was fixed to the ground with a wooden framework and skirted with plywood, as well as the presence of a nearby wooden outhouse, indicate that it was intended to be more than a temporary structure. The paint on the outhouse was new and trees in its vicinity had been freshly cut. It was obvious that the camper and outhouse had been recently installed at this location.

Near midday I stopped for lunch at Kearney’s Bottom, a small valley through which flows Kearney’s River. My father and I had camped there when I was 16. Before eating I took a walk into the woods to sit under the tall old trees for a spell. In the shade of the trees the air was cool, the ground carpeted with moss. A few small birds kept me company. I had always found the name “Blackwoods” a little ominous. However, sitting in its midst, I found it to be a peaceful and inviting place. Groves of well-grown trees like this are rare enough in the Avalon Reserve.

Returning to the road I lay down a while on the grassy spot where dad and I had camped. Being in a valley, I was sheltered from the wind, so when the sun came out it became quite warm. I removed my boots and socks. The air and grass felt good on my damp, tired feet.

Kearney’s River has been greatly affected by the hydroelectric projects in the area. Much of the water that is now collected in the Blackwoods Pond reservoir, and from there channelled to Cape Broyle, used to flow in Kearney’s River and eventually to the Spout River in Aquaforte. Dams just above where Kearney’s River crosses Horse Chops Road have stemmed the flow. The broad field of boulders at the bottom of the valley is evidence that a much greater volume of water once flowed there. One can also see how the road builders moved many of the river’s great stones so as to make a passage for vehicles through the riverbed, as well as to make a straight and narrow channel for the water. The river once flowed in a broad rushing expanse over the stones. Now it is no more than a trickle among them. A dried-up riverbed is a dreary thing to behold. I longed for the sight and sound of the old Kearney’s River.

In order to reach my campsite at the north end of Blackwoods Pond I took a side road that diverges from the main line of Horse Chops Road and leads to the canal that empties out of Blackwoods Pond. Along this road I found another mobile camping unit. The set-up was almost identical to that of the camper near the northeast corner of Stage Pond. It was fixed on the ground with a similar kind of wooden frame and had a well-built wooden outhouse nearby, indicating that the camper is intended as a more-than-temporary structure. However, this one looked more weathered. I would guess that it’s been situated at this location for some years. The rules of the Reserve state that no camping unit is allowed to be set up in one location for more than 10 consecutive days. By my reckoning, these mobile camping units are indications of significant infringements upon the Reserve’s regulations.

On the shore of Blackwoods Pond, not far from the camping unit, I also found slip-way structures and two small boats. The Reserve’s regulations allow for boats with horsepower of six or less on Blackwoods Pond, but it is not permitted to keep boats at the pond perpetually, nor to construct slipways to launch them.

Upon arriving at the canal that runs out of Blackwoods Pond I found an expanse of grass on which to make camp. I suspect the grass made its way there along with all the earth and rock that was trucked in to build the banks of the canal. The grassy spot is so large that it could almost be called a meadow. It was quite nice actually – a small benefit bestowed by the construction of the waterways.

That night I had a strange dream: people came to the pond in the morning to feed slices of bread to cats and egg-bearing creatures. The food made the animals sick; a cat’s fur became oily and sticky. In bad temper the cat tried to attack me. I fended it off, exclaiming, “Look what you’ve done! How would you like to be fed something that makes you oily and ill-tempered?” I scolded the people for so wantonly feeding bread to the animals. A song inciting pity for the egg-bearing creatures was sung.

Navigating the daily grind
Being a discourse on the dangers to modern society posed by single-brew coffeemakers (and those who use them). 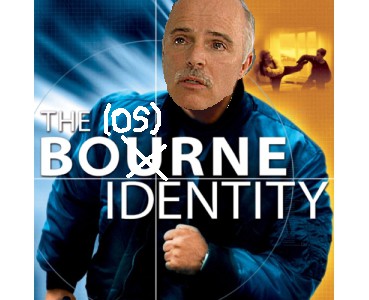 The (os)Borne Identity
A little rant on floor crossing