From Bay D’Espoir to Hudson Bay

Reflections from another long-time Newfoundland resident of Arviat

This week’s edition of 61st Parallel features a guest column from Charlene Paterson. Charlene is from Bay D’Espoir and grew up in Torbay. She moved to Arviat to teach after completing her education degree at MUN, and has now been living and working in Arviat for almost a decade.

Almost a decade ago, fresh out of Memorial University, I flew north on a Calm Air Saab with the droning of engines forcing me into neck-snapping slumber. What a racket. To my surprise, the flight was nothing like what its airline name implied.  As is the way of northern travel, arriving at one’s destination often happens in a roundabout fashion. We were informed that we would be making a slight detour to Whale Cove en route to my destination, Arviat. I was anxious to abandon sleep and see what lay below me.

Staring out of that tiny airplane window, my assumptions about the North faded quickly. As we moved beyond the Manitoba tree-line, I was reminded of cords of wood piled up in yards back home. Descending from high altitudes, my gaze fell upon an intricate system of water winding in all directions, feeding into ponds, lakes, and the majestic Hudson bay. The dotted wetlands brought to mind coming home with soggy woollen socks after hiking through the marshy lands near my own brooks, streams, and gullies. Had I realized how many Newfoundlanders were already in the North, I may not have felt like I was going to such unfamiliar territory.

I sighted Whale Cove and held my breath during the rough landing. Once I spotted the town, I could not believe such a small town could be erected on such isolated, barren land. Then again, I thought of home, of outport Newfoundland, where visitors marvel at old rickety fishing stages and weathered structures standing amongst slivers of rock and beaten by wind and water.

Walking into the airport at Whale Cove, the size of my old bedroom, I noticed someone’s collection of puzzles decorating the walls. It occurred to me that the puzzles probably were the source of much entertainment for those who had spent the long winter months in the town. In the airport, where there were no televisions, no vending machines, and certainly no cell phone reception, these puzzles had probably kept many travellers feeling like they had landed somewhere worth visiting.

I could not believe such a small town could be erected on such isolated, barren land. Then again, I thought of home…rickety fishing stages and weathered structures standing amongst slivers of rock and beaten by wind and water.

I felt shy among the Inuit surrounding me, even though I did not realize the full scope of what being a Kablunaaq (a white person) meant at the time. I was an outsider taking a gamble on the unknown. I smiled timidly at a friendly Inuit lady sitting next to me, curious about the way she carried her baby on her back.

She looked me over and jumped to her feet. Before I knew it, she was signalling for me to come towards her and was dialing a number on the payphone. She asked her friend to translate for me as she spoke rapidly into the phone. She asked me if I would help her by taking her child to Arviat. The Newfie in me naturally replied, “of course!” (trusting souls that we are), and she handed me a beautiful chubby cheeked baby, a pamper and a bottle, and sent me on my way.

It was not until I was back on the plane, carrying the baby in a traditional amautik that I began to understand the weight of the responsibility that was being asked of me. I was arriving at my new home, twenty-three years old, with a child that was not mine and with no idea who or what was waiting for me. I tried to stay calm but the fear of God was in me. What if this lady had misconstrued my friendliness for wanting a baby? I laughed the idea off and tried to convince myself that it was no different then inviting strangers in for a home cooked meal or a cup of tea back home. Deep down, I knew I should be flattered, and that it was a gesture of trust that should not be taken lightly.

It was a short flight, and I looked down at the point that Arviat was pitched upon as we landed. Two sides of the fragile-looking town were surrounded by water. The landscape suddenly seemed to swallow the tiny structures and inhabitants living upon it. Everything seemed so small, us included, but my feeling of insignificance was short-lived. I walked hurriedly across the tarmac to a cabin-sized airport and was met wholeheartedly by an Inuit family with welcoming faces. They bellowed out to me in Inuktitut, and cheered me on, applause and all, arms outstretched, as I walked through the door. As I handed the child that I had been entrusted with over to this family, I knew right away that home was a lot closer then I had thought it was going to be.

Soon after my arrival, I realized that the people who transitioned most naturally to the northern scene were often from ‘around the bay’ in Newfoundland. I was left wondering, was this northern connection a result of Labrador being in our own backyard, or was it a testimonial to the spirit of Newfoundlanders who move beyond the island, or both?

In this territory, there seems to be an abundance of Newfoundlanders thriving in a place where many cannot hack it.

In any case, being from Newfoundland has somehow set the stage for what has become a long lasting and beautiful relationship with Nunavut for me and my family. Like the Inuit, we are resilient people, proud of our heritage. In this territory, there seems to be an abundance of Newfoundlanders thriving in a place where many cannot hack it. I’m not sure if this can be attributed to our own stubbornness to succeed in the face of hardship or if it’s just an example of making the best of it. Either way, Newfoundlanders seem to bring their fun-loving nature with them which allows for an authentically good experience with the friendly and tight knit locals. The longevity of Newfoundlanders living and working away seems to be rooted in the Newfie manifesto: to help others, have a laugh and work your arse off.

Arviat thrives on mug-ups, music, hunting, sewing, dice games, bingo and square dancing the same way Newfoundlanders love a game of five hundreds, playing crib, TV bingo, getting your moose, fishing and dancing. Nine years after my excursion to Whale Cove, I’m amauking (carrying) my own child – my third – on my back, the same way I did when I first arrived here. Today, I find myself passing my babies over without hesitation to those same lovely people who trusted me to carry their child home on that bright sunny day when I first arrived in Nunavut.

… Today on the Indy 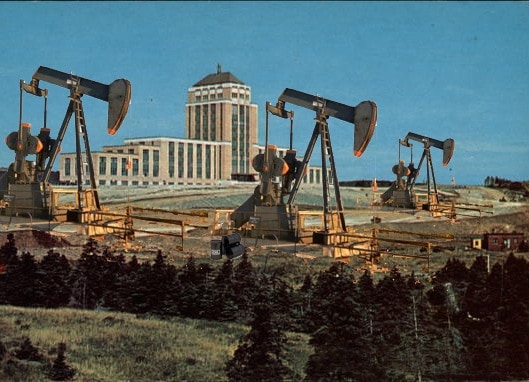