Nanuq of the North

A unique project aims to reduce conflict between two of the world’s top predators: human and polar bear

A couple of weeks ago I finished writing a press release at work and sent it out to the usual northern news agencies – mainly CBC North, Nunatsiaq News, and Northern News Services. I’ve done this many times before, but the attention that this news release received outweighed the last few put together.

This press release (available for viewing at www.arviat.ca) was about the success of the Human-Polar Bear Conflict Reduction Project, a project that the Hamlet of Arviat has been undertaking in partnership with the World Wildlife Fund-Canada for the last two years. This three year project has one year left to run and provides funding to the Hamlet to provide food containers, electric fences, and a polar bear monitor to reduce the instances of polar bear conflicts in and near the community of Arviat.

The problem with polar bears

Polar bears are a bit of a prickly issue in the north, and especially in Arviat. Called nanuq or nanook in Inuktitut, polar bears are far from the cute and cuddly white teddy bears promoted by soft drink commercials. Rather, polar bears are large, powerful carnivores, predators at the top of the food chain who have little fear of humans, a healthy curiosity and a voracious appetite. And there are more of them now than anybody can remember.

This seems to contradict the notion that polar bear populations are in decline, or are at least threatened by climate change and human activity. It’s common to encounter the belief, especially among southerners, that polar bears are disappearing. But it is obvious to most people in Arviat that each autumn is bringing more and more bears on the migration north along the coast of Hudson’s Bay.

…each autumn is bringing more and more bears on the migration north along the coast of Hudson’s Bay.

Of course, as somebody pointed out to me shortly after I arrived here, polar bears move. More bears in Arviat or less bears somewhere else doesn’t mean their population as a whole is rising or falling. Perhaps bears are simply adapting their migration patterns to changes in sea ice conditions or other environmental factors.

And one population that is certainly growing is Arviat’s, and with more people comes more hunting, more cabins on the land, more garbage in the dump, more country food stored outside in the winter – all things that act as attractants for polar bears and may help explain the increased numbers in the area.

Whatever the reasons for the increased numbers of bears, it is hard to argue with the fact that there are more and more bears showing up on our part of the coastline every fall. It’s not uncommon for 10 to 15 or more to be within a few miles of town at once, and from what people who have lived here far longer than I have told me, that is a lot more than usual.

So while climate change activists and wildlife preservationists use the polar bear as their poster child for species threatened by pollution and climate change, many in Arviat instead see polar bears as an increasing threat to people and their property. Bears are strong, hungry, and curious, and they do not hesitate to break open containers, smash windows, doors or walls, or otherwise force their way inside places where they think there may be food. Food includes dogs: many Arviammiut have sled dog teams in pens near town, and these are often a target of hungry bears, which is why the conflict reduction project installed electric deterrence fences around dog teams enclosures.

Perhaps more alarming is the number of bears that seem to be approaching the community. Polar bears are not generally afraid of humans and have attacked people in the past. In a community like Arviat, with something like 1500 children who love to play outdoors, this makes a lot of residents nervous.

So there is a fundamental conflict between local knowledge that sees bears as increasing in numbers and as a threat to be defended against, and an increasingly vocal global movement that sees bears as threatened and needing protection against people. While most of these global voices are no doubt well-intentioned and raise valid points, there is sometimes bitterness in Arviat that “southerners” tend to ignore the local viewpoint and often fail to consult local people, who have generations of experience in the Arctic and whose very survival depends on a close relationship with all animals, including nanuq.

The WWF-Canada/Hamlet of Arviat project was designed to use some of that local expertise and traditional knowledge to protect both people and bears. In addition to installing food containers and electric fences, the Hamlet hired a local hunter and wildlife worker to patrol each night for the three month period from October to December, which sees the most bear activity in this area. The monitor used spotlights, flares, bear bangers, and, if necessary, rubber bullets to flush bears away from town. Just as important a tool was his knowledge of bear behaviour. For example, the monitor always tried to drive bears to the north side of town so they would continue on their north migration towards their winter hunting grounds, rather than forcing them south and having them simply circle back around.

The calls I received from media across Canada on this project demonstrate just how much interest there is nationally and internationally in the Arctic, its land and its wildlife. But it’s important to remember the people as well, who not only have a lot to teach us about the population and behaviour of polar bears, but who deal with local wildlife and the Arctic climate every day of their lives.

While the exact status of the polar bear might be unclear, it is clear that climate change in the north is real, and the extent of those changes and the potential impacts on humans and wildlife is impossible to predict. These changes are getting the attention of the entire world, which is why projects such as the Arviat-WWF Human-Polar Bear Conflict Reduction Project are so important to help bridge the gaps between international organizations and the local communities most affected by involving those communities and using their knowledge and expertise. Nanuq might be king of the north, but he’s certainly not the only citizen. 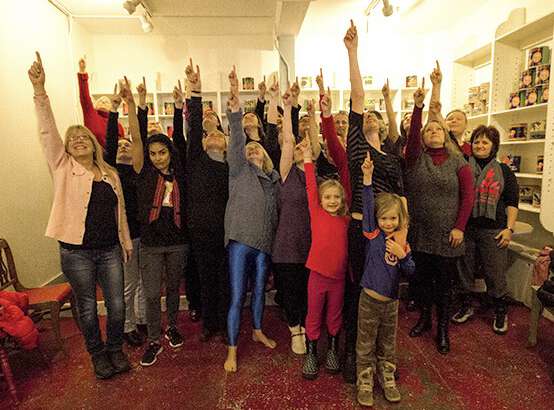 United we stand, and dance
Valentine's Day cards and chocolates are out. This year many in Newfoundland are marking the occasion by joining the global V-Day movement 'One Billion Rising'.