Official government projections for provincial oil royalties look bleak. We must adjust to life after the boom.

Oil royalties are expected to remain low for the next decade. That’s according to the official long-term projection by the provincial Department of Finance, obtained through an access to information request. Oil royalties make up a huge part of government revenue, so this leaves a big hole in the provincial budget. 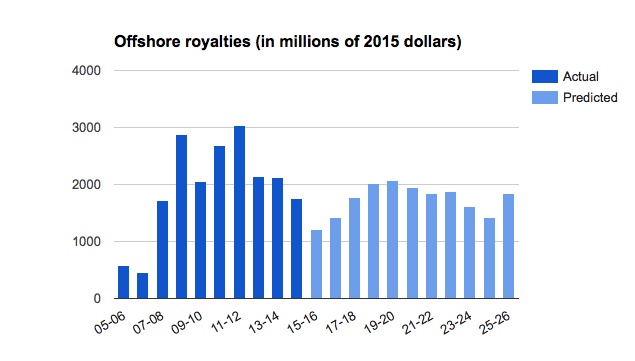 Over the next 11 years, the Department of Finance predicts that oil royalties will average about $1.7 billion per year (in real 2015 dollars). That is less than we received last year, when the province ran a deficit of $924 million. Even the best future year is expected to be less than we received in 2013-14, when we ran a $345 million deficit.

Royalties are expected to peak five years from now, which also happens to be when the PC Government hopes to balance the budget. Royalties are then expected to decline over the following five years, which could easily push us right back into deficit.

To make matters worse, the government projection is based on a rosy outlook for oil prices. Brent crude is currently selling for about $60 a barrel. The Department of Finance, based on advice from external forecasters, expects Brent to rebound to $90 per barrel by 2020. This is a lot higher than commodity markets are predicting, where Brent futures for 2020 delivery are trading at about $70 a barrel. 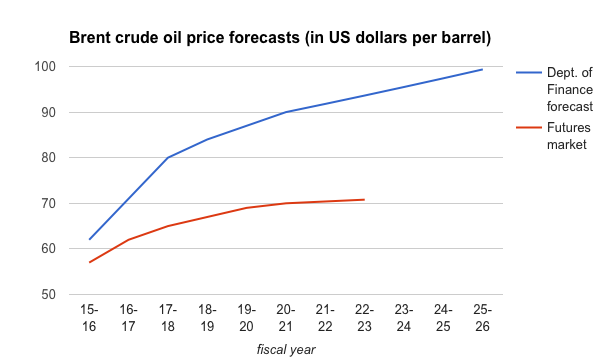 If futures markets are right about future oil prices, then our budget deficit will be even worse that predicted. Assuming that this oil price crash will be brief is deeply unwise. And over the longer term, technological change and action against global warming could very well render oil fuels obsolete.

Here is the same royalty projection, but broken down by oil field. 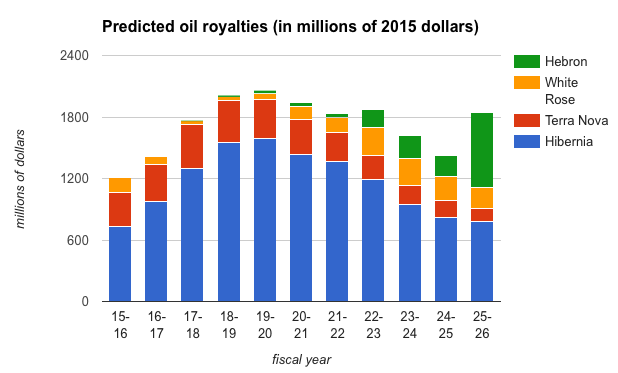 Notice that even though the Hebron project is scheduled for first oil in 2017, it doesn’t generate significant royalties until 2022 and doesn’t pay really big money until 2025. This is a consequence of the risky royalty deal** signed by the Williams government that delays royalties for the province until the oil companies have recouped their investment costs. This system has been criticized by renowned tax economist Jack Mintz at the University of Calgary for subsidizing oil companies.***

The royalty projection does not take into account the possible future development of Bay-du-Nord, a major discovery by Statoil which Premier Davis claims may produce oil in four or five years “or earlier”. However, Davis’ ambitious timeline has generated a lot of skepticism, and even if Bay-du-Nord is developed within five years, it will probably take several more years before it generates significant royalties (though a lot depends on the details of the royalty agreement, which may be quite different from earlier developments).

Time to think beyond oil

The collapse in oil prices has blown a big hole in the provincial budget that is not going to fix itself.

Oil prices are unlikely to recover enough to fill the gap, and the accumulating debt must be serviced by a shrinking economy and labour force. Cutbacks and tax hikes are probably inevitable.

The sooner we accept this, the better.

** I wrote an algorithm that can be used to calculate royalty benefits from the Hebron project that you are welcome to play with. Bear in mind that it is only a rough approximation.

*** The analysis of our offshore royalty system by economists Chen and Mintz was criticised by economist Wade Locke of Memorial University. Mintz has rejected Locke’s criticism, and he and Chen responded to it in a later paper. 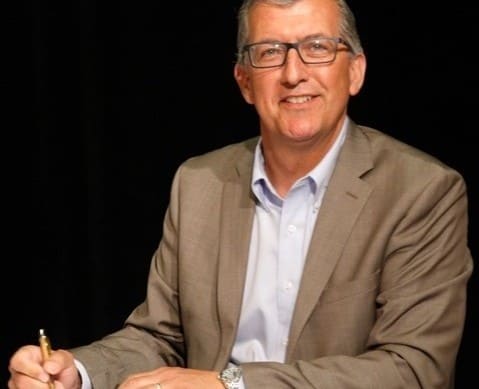 Paul Davis, P3s and the democratic deficit
Does an outgoing regime, in its dying days, have the right to forfeit our collective future?

A Vital step for human rights in N.L.
Legislative changes are coming that will allow some people in the province to correct erroneously certified gender markers on their birth certificates and other government-issued…