Next up in your MuniPoli 101 lesson plan: development, or what gets put where—and how—to make up your city. Zoning and development control bubbles under the surface of almost everything that happens in the City, and over time shapes the very identity of the City itself. What we come to know as the character of the place we live, our habits, the ways we interact with services and each other, are all enormously impacted by land use planning.

The Power of Planning

This is one of council’s greatest powers: deciding what buildings and activities can be built or done in which zones. It sets out these terms in broader, visionary language in the Municipal Plan, and the rubber hits the road in the development regulations, where those visions are operationalized. The outgoing Municipal Plan explains this hierarchy via this handy graphic:

In effect, the Municipal Plan talks about what the City should look like, and the Regs set out how we make it look that way.

The outgoing Development Regulations were approved in 1994, when this writer was in kindergarten. There have been amendments since then, changing rules and adding definitions and uses here and there. The last significant review of the municipal plan took place in 2003. The new Plan and Regulations, titled Envision St. John’s, were first presented to the public in 2012. The Plan centres around five key themes: valuing environmental systems; healthy neighbourhoods; a strong, diversified economy; urban design; and investment in transportation and services. In effect, they address the root of many challenges in the city: high servicing costs, difficulty getting around, lack of housing affordability, climate change. Since their first public distribution, the documents have undergone numerous revisions and rounds of public engagement, and were finally submitted to the province in the spring of 2019 for review and approval.

And there they sat, and sat, and sat, for two years, before returning to council this spring for a final round of public hearings and formal adoption—which took place at the September 7, 2021 meeting of council. This sort of incredible bureaucratic hold-up is another way the City is hamstrung from serving its residents by the Province. But since I’ve complained about that already, let’s move on: time to talk development.

Each zone in the regs has permitted uses and discretionary uses set out within it; these are uses that can be approved at the staff level without council involvement, and those which require council approval, respectively. Take, for example, the Residential High Density zone, R3: 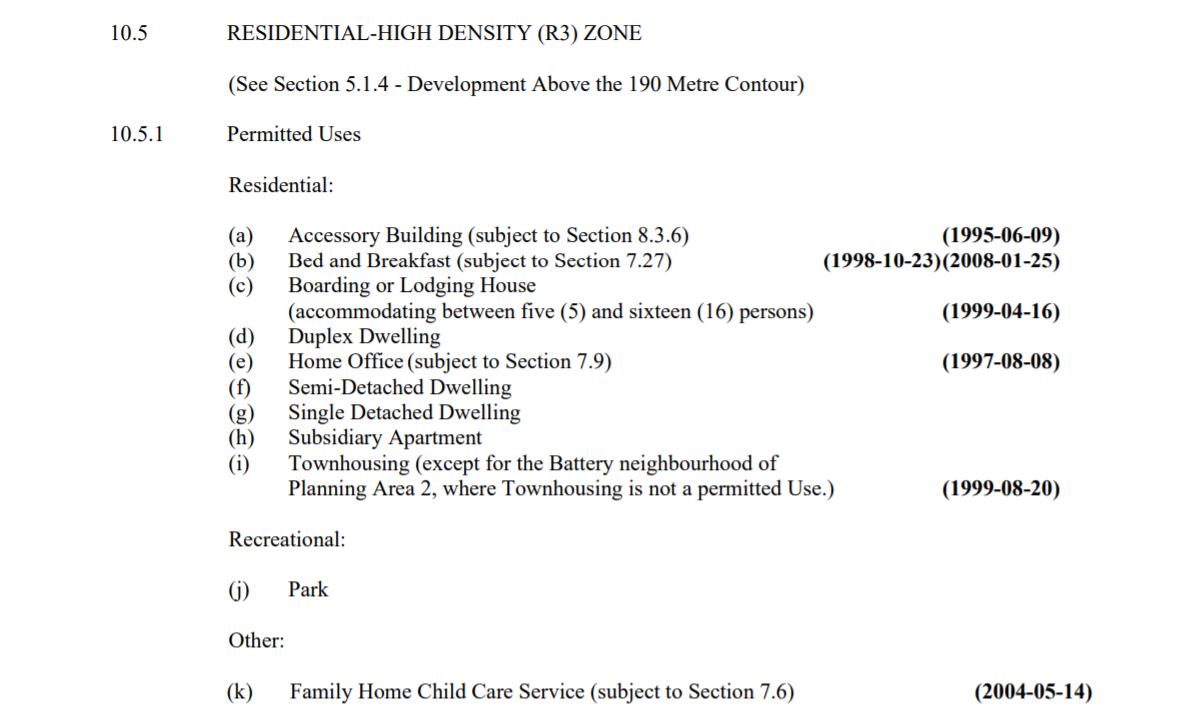 So if I own a property in R3 and want to build myself a bed and breakfast, I can simply submit a development application and staff can process it. But if I want to put up a parking lot, that application will have to be advertised to all properties within a 150m radius and then be voted on by Council before it can go ahead. This is why you might get an invitation to comment on some developments in your neighbourhood, but not on others. The zones in the regs all have other requirements set out for things like building heights, rear and side yard clearances, and other nitty-gritty details which, in the aggregate, actually have an enormous impact on the feel and functioning of the city. Variances of no more than 10% on these are allowed in some instances, but anything beyond that is outside the scope of council’s authority.

On the subject of variances as well, there are “non-conforming uses” throughout the City—effectively, uses which would not be allowed under current regulations, but were already there when the existing regulations came into place. If owners want to do something new in one of these properties, they have to apply for a “change of non-conforming use” which must be, in the opinion of staff, within a reasonably similar “degree of non-conformity.” So your convenience store in a residential area can perhaps become a hair salon, but probably can’t become an aircraft hangar.

When it comes to discretion, council can choose whether a discretionary use is suitable for the location in question. Council cannot decide to forgo the process of advertising the application, nor can it prevent people from applying for discretionary uses: it’s often queried “Why is council even considering this?” and the answer is that they have to. Likewise, any decision of council can be appealed by a resident, which is again a fundamental right of residents and not something that can be overridden, no matter how inconvenient it is to developers. In the context of considering a discretionary use, council can require a Land Use Assessment Report, the terms of which are set by council and which often include analysis of things like wind, shading, traffic, parking, access to transit, and so on. This helps council and the public consider the application with relevant information close at hand.

Another note on discretion: council can always choose to change what is allowed within a zone by amending the regulations. Check out these site-specific height amendments in Commercial Central Mixed, which covers a lot of the downtown: 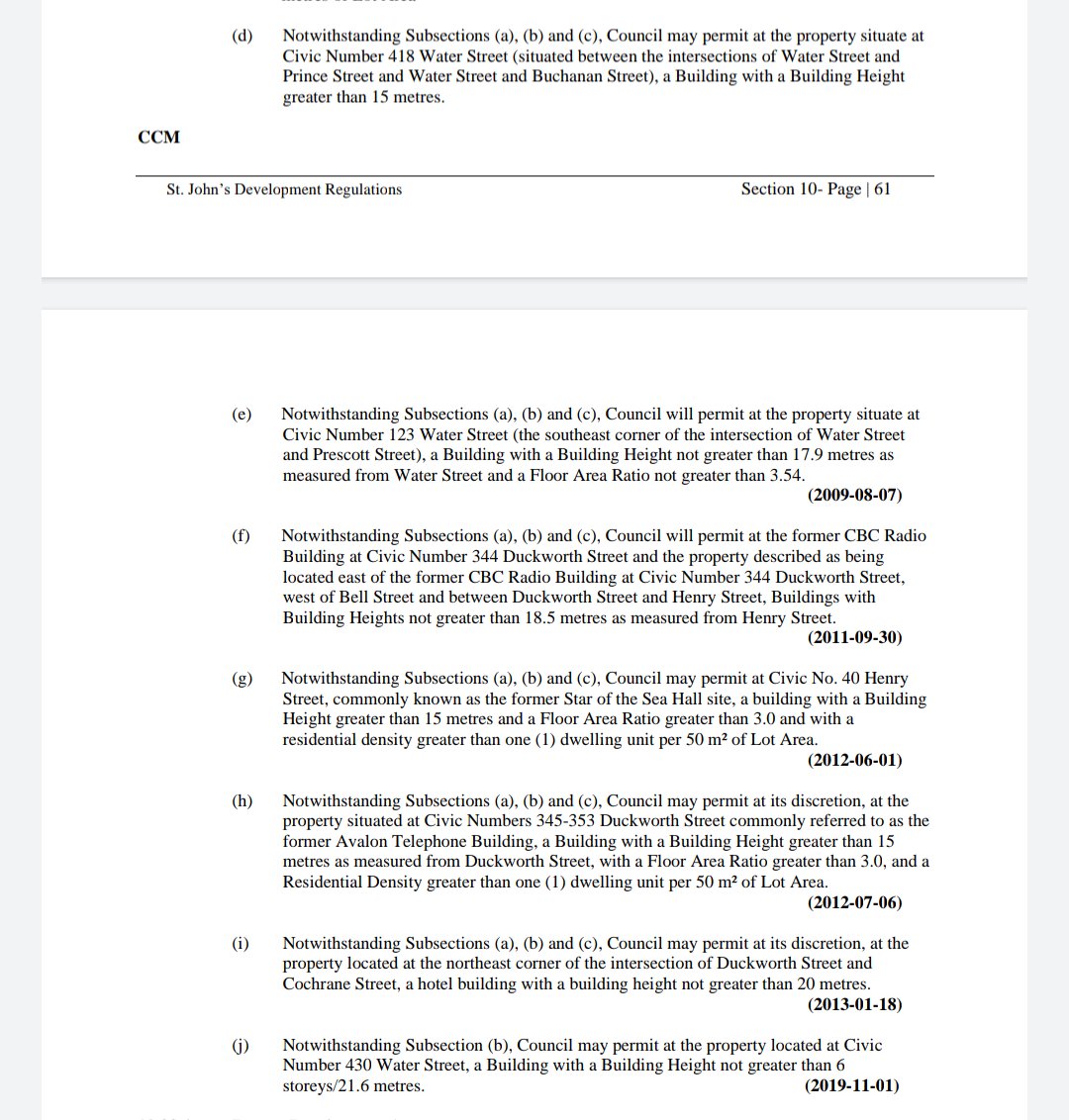 Though opponents of the new heritage by-law—intended to be adopted in step with the Envision regs to strengthen heritage protections—would have you believe this power is new, as you can see from this list, it isn’t. It’s a fundamental power of council to change regulations as it sees fit. Complaints about the by-law include that it doesn’t cover height restrictions; that’s because those restrictions are contained in the regs already, not just for heritage areas but for all zones in the city. While these particular amendments point to a uniquely nefarious pattern of applying discretion, this power of council can also affect positive change, making sure the regs can, on an ongoing basis, keep up with the changing nature of the city.

Should a use not be permitted or discretionary in a particular location but someone still wants to develop it for that purpose, they could apply for a rezoning. The rezoning process involves several votes of council and public meetings, as well as opportunities for the public to submit their opinions in writing. In general, staff will veto “spot zoning”—creating a random island of a particular zone within another. This prevents office towers from being constructed in the middle of an R1 suburb. However, rezonings are sometimes recommended in cases where the uses for that zone are compatible with the adjacent area, which starts the process of council and public input.

The engagement process for these kinds of procedures happens at a point when developers have already done a significant amount of work and often paid a significant amount of money in professional fees to engineers and architects. Once a development application is submitted and the engagement process started, it’s often stated by the public that they feel it’s a fait accompli. This is reinforced by developers often being unwilling to incorporate feedback from the engagement process into their projects due to the significant sunk costs by this stage in the game. This can, in turn, lead to projects with good potential being turned down by council due to public objection.

All in all, it’s safe to say there is ample room for improvement in the engagement process. Envision requires developers to provide evidence of some discussion with neighbours prior to submitting a development application, but this requirement has few details attached.

Good engagement is a difficult nut to crack. Early engagement that’s short on details can often lead to neighbours fearing the worst to rule a project out categorically. Late engagement that feels (or truly is) simply a box to tick on the way to a foregone conclusion also leads to widespread pushback which can influence council decisions. Neither benefits the wider community. The City funded the creation of a “NIMBY Toolkit” which includes a quote from Confucius: “Success depends upon previous preparation, and without such preparation there is sure to be failure.”

The Toolkit points out, under the heading “Community Engagement & Communication Strategies,” that:

“There is probably no more singly important thing a municipal official can do to gain community acceptance than listening to the public. Yet, one of the most common complaints expressed by residents is lack of awareness of a new housing proposal or lack of good information.”

I have seen cases where developers made a point of establishing personal relationships with neighbours prior to the beginning of a project, and my impression is that front-loading that effort actually leads to a much smoother process in the long run. After implementing Envision, this is a potential next step that council could take. This would make sure the lofty visions of the Municipal Plan—that focus on building real neighbourhoods and helping St. John’s move away from the patterns of urban sprawl that make it disconnected and expensive to live in—actually come to life. 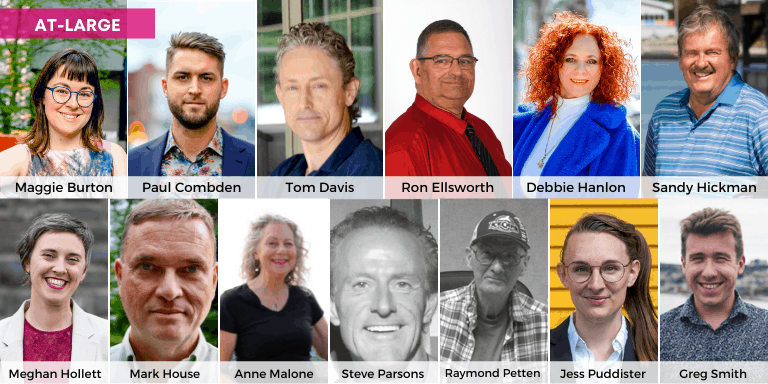 St. John’s City Election 2021: At-Large
We asked At-Large candidates a dozen questions about why they’re running, the issues facing the city, and what they want to do about them.

So Moved, St. John’s: 13 September 2021
Two weeks out from the city election, St. John's adopts new heritage by-laws—which are then immediately ignored by council, for some reason.