Adventures are fun…until they’re not

After Angkor Wat, riding along the Mekong was the next step in our ‘Ride Asia’ dream. The cool thing was that if you had asked us this time last year whether we would now be riding along the Mekong in Cambodia we would have told you that it simply did not fit into our plans. This has become one of our favorite games to play on this trip: variations on the question “Who would have thought this time last year that we would end up in Asia on little Hondas after selling our big BMWs?” It’s one of the best aspects of motorcycle travel: you really have no idea what tomorrow is going to bring. What you do have is almost complete freedom and control over your decisions (with the notable exceptions of what customs officials – and your bike – have to say about them).

This meant that when we decided to follow the Mekong on the way to Laos, we could truly follow the Mekong. The main road followed it partially before branching off and leaving the meandering river behind. According to our map however we could pursue a little road that followed the Mekong and would eventually deposit us at our destination of Stung Treng. Even if this little road did not allow us to keep the Mekong in visual sight, we would have taken it. Large roads are rarely appealing on a motorcycle. Large roads in Asia are even less so. Imagine a high speed video game where it seems like everyone is out to run you over. It’s not as fun as it may sound, especially when you factor in that you don’t get a second life. That is not to say we will not ride in major cities: we did ride in and out of Bangkok and Ulan Bator. But given the option of riding through small villages and windy river roads – with or without the crazy drivers – the river roads and small villages win.

…we figured we had found a little bit of adventure. We just had no idea how much of an adventure we had in store.

And so when the road branched off we kept to the river rather than joining the mad dash along the highway. When our road turned into a dirt path we did not despair. We had faith in our map. That this strategy had failed in Bangkok meant nothing to us, for this was a new map. We had water, we had gas, and therefore since our map said we could continue, continue we did.

We eventually came to a little tributary that needed to be crossed, and when our ferry turned out to be a raft pulled along by a rope we figured we had found a little bit of adventure. We just had no idea how much of an adventure we had in store.

Once we made it over to the other side our dirt road disintegrated into a path through some huts. A woman there scolded us and said we should go back; the road was no good. At least we assumed she was saying something along those lines. She spoke no English and we didn’t know any of the Khmer language (other than something that sounded like ‘otlho’ to me, which we took to mean ‘bad’ since she repeated it a lot while stamping on the ground). A younger man laughed and said we could cut through the jungle and meet up with the main road, no problem at all. We assumed the woman was a mom and decided to ignore her good hearted advice. We were riding into the jungle.

Part of our reasoning was that we were “only” ten kilometres from the main road. We could walk that distance if we absolutely needed to, especially since we had enough water with us. Our other reasoning was that we had our tent, and so long as we stuck to beaten paths made by the locals on their bikes (as well as those made by the cows), we should be able to avoid land mines. A lot of work has been done on removing landmines from Cambodia and the risk is not as high as it was ten years ago but there is still a lot of work to be done and random trooping through rural areas is not advised. So, our plan being to stick to beaten paths, we did not really think we would become lost.

…we were never actually lost, since our GPS was able to tell us exactly where we were at any given time…in the middle of nowhere, with no route leading to the main road.

And technically we didn’t. If being lost means having no idea where you are then we were never actually lost, since our GPS was able to tell us exactly where we were at any given time, and even show us on its display by means of a little ‘X’.

Even if that ‘X’ was in the middle of nowhere, with no route leading to the main road.

If, on the other hand, being lost means knowing exactly where you are (that ‘X’ blip in the middle of nowhere) but having no idea how to get from your current location to your desired location, then we were most certainly lost. We were also going much slower than anticipated as the path became more of a trekking path, and then an overgrown trekking path, and then a trail trampled by tiny pigs. The good news was that the little bikes could handle the road. The bad news was that after being redirected in circles by the farmers we encountered, it was already dark, and we had moved about 3 kilometres on the GPS. It was time to camp wild in the jungle and deal with the whole situation in the morning. We still had yet to hit the panic button.

Okay, you can panic now

That we saved for the next morning, when we finally made it to the road.

Only to find that said road was cut off by a blockade of stacked trees almost 4 feet in height and stretching as far as the eye could see in both directions. At this point our water and gas were significantly lower than when we began our adventure and the sight of this brilliantly effective lo-fi blockade almost made me cry. Back trekking was not really an option, and yet going forward was impossible. Up until this point the off-road jungle adventure had been fun. But there is occasionally a point where the fun wears off and you find yourself in trouble. This was our point.

Or so I thought. I forgot I was traveling with a German engineer who has a very real and rational fear of the demon I morph into when I am denied food for any length of time. Before I knew it I found myself catching hold of the front of the bike as the German pushed it up a make shift ramp. From there we manhandled the bike over the stumps, before moving the ramp back to the other end and rolling it down again. Help arrived just as the second bike was on the second ramp. We were hot, we were sweaty, but we had by-passed our major hurdle.

We were free…of sorts. It turns out the main road was still another five kilometers: almost five hours of riding through sand, mud, and rivers still lay ahead of us. But at least this road was easily distinguishable as a road. It was also no longer in the jungle, which meant I no longer had to fear that one of the branches that kept whacking me would deposit a giant furry spider onto my shoulder or my bike as an unwanted passenger.

It also meant the adventure ride was fun again: we could love that we did it, and the only person with any lingering anxiety about it is, I assume, my mother as she reads this. 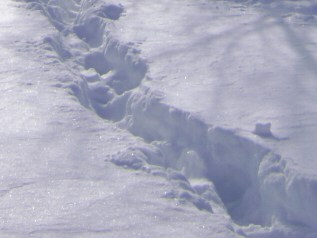 … New on the Indy