If Dwight Ball has learned anything amid all the turmoil and unrest of his first mandate, it’s that it can’t touch him. He just needs to ride it out.

Dwight Ball, the lucky 13th Premier of Newfoundland and Labrador, is a guy who just rolls with the punches. When adversity strikes, his strategy is to do nothing.

It’s worked exceedingly well for him so far.

The Premier was first elected to his job in the context of a collapsing PC dynasty carrying the albatross of Muskrat Falls, hemorrhaging Premiers faster than Frank Coleman could pave roads in Labrador. Ball won with a solid majority and some narrative of a clear yet difficult way forward.

But just months after his win in winter 2015, Ball was faced with a mass revolt spurred on by Budget 2016. The province-wide budget protests, culminating in the monster NL Rising rally at Confederation Building, very nearly shattered the Liberal government and ultimately cost them a finance minister plus an MHA.

Just a few months later in fall 2016, he faced a Muskrat Falls revolt in Labrador, complete with hunger strikes and occupations and the prospect of the entire project going off the rails. There were police checkpoints on Labrador highways, ugly arrests and transportation of prisoners, and a fury at government that united the territory.

Throughout his first year in office, pretty much all Ball saw were protests.

Add to this a litany of scandals that getting harder and harder to track. Ed Martin’s botched firing, Perry Trimper’s racist screed, the Dale Kirby and Eddy Joyce harassment scandals, whatever it is that Gerry Byrne is getting on with half the time, a few broken campaign pledges, and the strange to-do about Ball’s jacket and TVs being evidence in a homicide investigation.

I’m sure I’m missing a lot here, but I hope you get the point. This was Ball’s ride through his first four years. And specifically with respect to any one of these major conflicts and scandals, I think it’s correct to say that Ball didn’t do much of anything other than the bare minimum he was obliged to do. He never set about fixing anything to make the system better. On the whole one has to say Ball just let the chips fall as they may.

And that was good enough to get him re-elected.

Now I’m not saying Ball’s philosophy of non-doing is entirely responsible for this. It is, rather, a sad statement on where NL politics are right now. But since 2016, Ball has mostly given up on any pretense of a way forward and instead has just tried to weather the storm.

The only proof he needs to see for this is that he is still in office.

So why would he approach the Mitchelmore hiring scandal any differently? Can protest and public outrage actually make him do anything? Do opposition parties have the depth and organization to make the minority government do anything? Is there any political force in NL that actually poses a threat to Dwight Ball?

On Tuesday, December 3rd, Ball said, “If the name Foote weren’t involved … we wouldn’t be talking about this.”

Does this sound like a Premier with plans to fix anything?

No. This is a Premier with plans to do sweet shag all, and he’s counting on us to do the same.

Photo by the Independent. 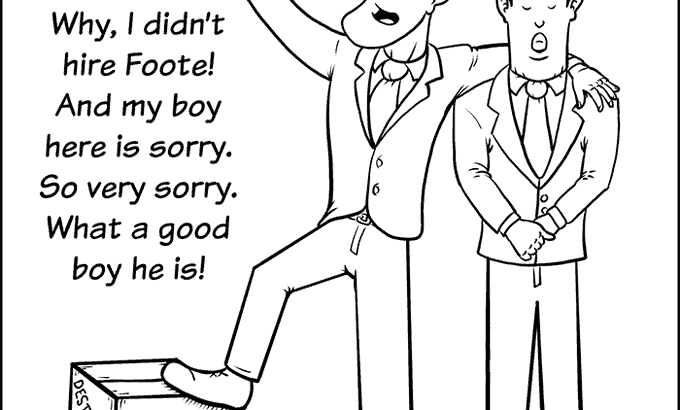 Indy Inks (4 December 2019)
Newfoundland's Very Good Boy is having a few bad days in the House of Assembly this week.

Living Well Amid Waste: Wealth, Wages, and Food Insecurity
Newfoundland and Labrador has the highest rate of food insecurity in Canada. It also has the second lowest minimum wage. These two things are connected.