The phony war on Christmas

It’s the most wonderful time of the year, so when someone says “Happy Holidays,” don’t be a putz.

I’m really quite fond of most Christians. My parents are Christians, and many of my friends are. They’re lovely people. They are kind. They are generous. When moved to judge, they judge with sympathy and compassion. They are the best kind of people — the kind who can be relied on to do good when called on and never do ill.

And then there’s the ones who get annoyed at me for wishing them “Happy Holidays”.

My religious beliefs are best categorized as atheist. Of course, they’re more complicated than that, but for all relevant purposes, I don’t think there’s a god worth worshipping in the orthodox senses of worship. The only philosopher I really, genuinely like once said, “Anything that can be said at all can be said clearly,” and I’ve never heard anyone talk clearly about religion (any religion), so I really just prefer not to talk about it.

But for all that, I love Christmas. I love some of its secular aspects, and I love some of its religious aspects. I love the lights, inside and out. I like the carols, including the religious ones. I love the smell of turkey cooking. I like presents. I find that, aside from mall parking lots (which, let’s face it, downgrade from purgatory to frozen-plane-of-hell for the two months after Halloween), people are just a little bit more pleasant. Everyone pays a little more attention to everyone else. That smidgen of extra kindness makes a cold, dark season warm and bright.

What issues I do have with Christmas are mostly minor and reasonable. Elf on the Shelf is stupid. It didn’t exist when I was a kid in the ‘80s. It’s not a real tradition, and why anyone would want to invent even more commercialized traditions is beyond me and ridiculous. I only barely like “The Hat I Got For Christmas is Too Big” the first time I hear it each year, and never thereafter. I have no idea where Tibb’s Eve came from, but it didn’t exist 15 years ago and it’s not like anyone needed extra excuses to get drunk.

But the more recent tradition that actually pisses me off is the unjustified umbrage taken to the use of the term “Happy Holidays.” It’s a bit more inclusive, since there are other major events that also occur in late December (Yule, Hogmany, Hanukkah, New Year’s, Kwanza, The Once’s Christmas Shows, and so on), and so if we’re trying to include everyone, it’s an expression that excludes fewer people. Also, since everyone gets a vacation, it really is a holiday in one perfectly ordinary sense of the word.

I’m not anti-Christian. I’m against a false sense of persecution, based on not knowing the difference between being truly oppressed, and not being allowed to oppress others. There are places in the world where it’s a real problem to be a Christian, but this isn’t northern Nigeria or ISIS-controlled Iraq.

I was asked recently what justifies political correctness. I said that we should be sensitive to people who have been or are being oppressed. If someone wants me to say “African American,” I’m fine with that, since they’re a lot more likely to get shot by cops than I am. While I like “Baby It’s Cold Outside”, I also recognize that it’s a song about date rape and probably won’t play it around anyone else. Why? Far too many women are sexually assaulted, that’s why.

These are real forms of oppression. The fact that a display also wants to be nice to Jews, Atheists, Pagans (who, let’s face it, already had dibs on this holiday long before you did), does not mean there’s a “War on Christmas”. You’re not being oppressed when other people are nice to other people who aren’t you.

If you want to go back to a time before you had to be nice to people with a different metaphysics than you, then tough — that’s not how time works. How about instead you try saying thanks, just like I do when someone says “God Bless You”?

And for the rest of you, Happy Holidays. 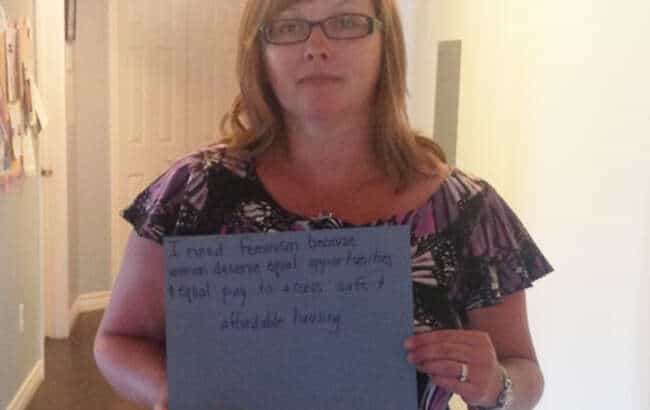 How long must the ink bleed?
Challenges faced by women in the workforce show feminism is just as important now as ever