Last December, the Senate finance committee recommended the abolishment of the penny. It didn’t make the front page. Everyone was busy with Christmas, I guess.

I want to take a stand here and now. I’m in favour of scrapping the penny.

Who among us, after all, hasn’t stood in a checkout line, toes tapping, fingers drumming, while some lunatic rummages through a wallet looking for exact change. It’s bad enough to live through the bills, twonies, loonies, quarters, dimes, and nickels. But when it gets down to looking for those last three or four pennies, that’s when I start to feel like I’m incubating a stroke.

“Just a second. Um. I’m sure I’ve got three pennies in here somewhere.”

Once, over Christmas, I was tempted to throw a nickel on the counter. “Here. Take it out of that, so we can all get home by spring.”

But I didn’t. I’m too nice a guy for that. Sometimes I think we’re too polite a nation.

How many pennies are on the ground?

Next time you’re standing somewhere where there’s a lot of foot traffic, look around to see if there’s a penny on the ground. Keep an eye on it. Guaranteed, a hundred people will walk over it before someone picks it up. Why? Because they’re worthless.

“I don’t want the pennies,” people tell cashiers. I do it myself. And it’s quite common for cashiers to say, “close enough,” when you get to within two or three cents of your total. That’s because they have a slush fund of pennies from people like me to cover other people’s shortages.

And who has failed to notice the ‘give a penny, take a penny’ thingie at every checkout in town? They’re there for one simple reason: pennies have gone from being a useful piece of currency, worth carrying around, to a monetary pain in the ass; the buggy whip of coins.

I read the other day that the penny has lost 95 per cent of its purchasing power since it was introduced. If my math is right, that means that anything costing five cents back then will now cost a dollar.

What does a penny get you?

When I was a child in the ’50s, there were candies in the corner store showcase that cost a penny. Some were three for a penny.

I took a field trip to my neighbourhood Groc & Conf to see if they sell anything for one penny. They do have a nice bit of loose candy on display, but they’re all five cents apiece or more.

There is one, just one, candy that’s a penny apiece, but wait: they’re sold in bags of a hundred for 99 cents.

So the poor youngster who picks a penny off a sidewalk and goes into a store to buy a treat will, these days, sadly, be SOL.

Here’s a central truth: prices never stop rising, but currency values never change. The consequence of this is that the denominations of least value have to be discontinued as they become practically worthless.

English currency, whose lowest denomination is now the penny, once had a half-penny and a farthing, worth a quarter of a penny. This made sense, of course, when there were things you could actually buy for a farthing, like, well, maybe farthing candy.

Time is too valuable to spend on pennies

The Royal Canadian Mint produced nearly half a billion pennies in 2009, and it wasn’t a big year for penny output. In 1999 and again in 2006, they made over a billion pennies. Over the last 10 years, roughly eight billion. What’s going on? They aren’t circulating. Everyone’s throwing them into one of those humungous mayonnaise jars used in institutional kitchens. And leaving them there. Presumably, we’re too busy to spend time rolling them and taking them to the bank. Our time is apparently too valuable and the penny, even rolls of them, too worthless to bother.

If you care about three or four cents on a $30 or $40 total, you should be on all fours outside the WalMart entrance with a scoop and bucket.

It costs a cent and a half to manufacture a penny. And if you’re stamping out a billion a year, the cost adds up pretty quickly to the cost of an MRI, or new uniforms for mail carriers, or upgrading to the latest model of Tazer. You know what they say: a penny saved is a penny-and-a-half earned.

There are those who want to keep the penny. Their answer to the staggering cost to the treasury, I suppose, is, “The government’s good for it.” Possibly, they’re people who actually like digging through change purses at checkouts and causing strokes. And they may view the mayonnaise jars full of pennies as a rainy-day stash, kept in reserve for when another Igor hits, and the water’s up to your armpits in the basement: a perfect time to grab a few jars of pennies, row down to the store, and turn them in for a candle and a bottle of water. Oh, and a box of matches too.

The conspiracy theorists probably want to keep the penny because they’re damn well sure that if it’s abolished and cash registers round your total to the nearest nickel, retailers will have figured a way to set their prices so the total always rounds up, making an extra few cents on every total.

All I can say to those people is if you care about three or four cents on a $30 or $40 total, you should be on all fours outside the WalMart entrance with a scoop and bucket. It’s up to your ankles in pennies out there.

Scrapping the penny is not a new idea. Australia and New Zealand stopped minting pennies in the 1960s, dropping them as legal tender in the 90s. Their cash registers round to the nearest five cents. Remarkably, their economies managed to survive it, as did consumers’ confidence that retailers wouldn’t rip them off.

Crikey! They did it in Australia and New Zealand. We can do it here!

A thought experiment: imagine being asked, “Rounded or exact?” when you get to a checkout. If you said, “Rounded,” the cash register would produce a total rounded to the nearest nickel. Now, tell me, what percentage of people do you think would ask for the exact total, to the penny? My guess is precious few. I’m quite sure of it.

So what are you waiting for? Write your MP and tell him or her it’s time to get off the pot and flush the penny. And if you don’t agree, then rent a cube van and get your pennies to the bank, before the Canadian Mint goes broke.

<p class=”pullQuote”>In the case of cod, for example, I believe I’ve read that once it was the largest biomass of any species on the planet.</p>

Have-no-more
An inconvenient truth we need to discuss 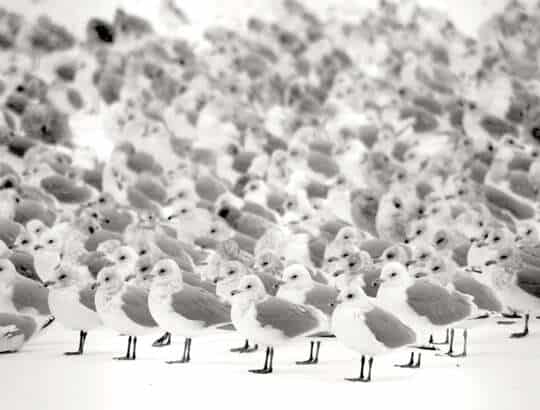 PHOTO: Hunkered down
Through wicked gusts of snow, the gulls of St. John's harbour see a long day ahead.