Is the Canadian-American window a myth?

It was in the early hours of the morning that I finally went to sleep, but not before witnessing the election result that would bring in the current U.S. president.

I messaged the words ‘are you okay?’ to my friend Rose in the U.S., who had as it turned out gone to sleep early. For them it would be a very different morning. For me it already was.

From the second my friend had read the message they understood what had happened. While this was not the good news they had hoped for they thanked me nonetheless because it had been the gentlest way of finding out how the election had gone. Or at least a gentler way than turning on the cacophony of reports on TV.

For so many of my fellow Canadians the events and conditions—both social and political—in the United States seem overwhelming.

Our neighbors have always had an identity distinct, and yet similar, to that of Canada. Indeed, our nations’ histories are so deeply entwined that one cannot study the past of one without examining the intricacies of the other. We have come a long way from the days when Canada referred only to a part of British North America, and the United States was still only a small collection of governments (a collection many saw as doomed to fail). We have both grown into strongly independent, and yet dependent, nations with respective national mythologies.

We have not been unaffected in Canada by the most recent turn of historical events either. With Corner Brook’s pulp and paper industry trying to catch new markets in India to avoid U.S. export duties, Newfoundland is by no means immune to the impacts of U.S. policy change. Delicate and long-cultivated political and trade relationships across the entire border are now in jeopardy.

But, while the U.S. state itself is becoming increasingly hostile to its neighbours, we must be careful not to conflate the state with its people. To see the legacy of the current administration and president, who was not supported by the popular vote, as indicative of the country’s mindset would be a dangerous oversimplification.

If you cross the southern border you enter a different realm. The tent cities that frequent underpasses, road margins, and nearly every corner of American cityscapes gesture to a country in the midst of a poverty and housing crisis.

There is a renewed sense of isolationism throughout the country. It is bizarre to witness a place that has not only been built by wave after wave of immigration, but currently depends upon immigration to sustain its population, be so removed from the world at the same time.

It would be idiotic to claim the U.S. does not have problems. But it is equally idiotic to disregard the potential of the American people, or to ignore their own internal struggles by claiming the role of passive observer, as many Canadians have.

Gazing through the window

As Canadians we’ve developed a sort of mythology about our relationship to the U.S. almost as potent as the U.S. self-identity of bravery and liberty. We are the kind, caring, neighbourly northern neighbours whose manners supposedly eclipse those of our southern counterparts. We are purportedly the purveyors of accessible healthcare, though our healthcare could still be much more accessible.

These self-concepts have in turn led to a certain smugness. A sense of superiority as dangerous to a nation as that present in our southern counterpart. Many of my friends have told me they don’t even wish to travel to the states anymore, if they ever did. In that regard they not only miss out on visiting a very diverse and beautiful country but put the very nature of their own supposed ‘Canadian-ness’ in peril as a result.

In the U.S., despite the socio-political ills, there is not so much of a gap in manners compared to our own as we might believe.

Someone’s transmission drops out from under his truck on the corner of Commonwealth and Dale in Buena Park, California, and the truck glides to a stop near the curb. Calling for help, people go and push the car into the nearby parking lot. It’s what we might consider to be a distinctly Canadian moment. But it isn’t a Canadian moment at all, and the sight of people rushing to someone’s aid isn’t an anomaly in American life. Nor can we say that the desire to assist one’s neighbour is limited to the American left-wing, as indeed kind acts are committed daily by people of any combination of Republican or Democrat affiliations (or neither).

For whatever our political differences, at the root Canadians and Americans are not so dissimilar as we might believe. Indeed, what may define the difference, beyond the mythos, between Canada and the U.S., more than anything, is not our capacity to care for our neighbors but how we go about it, and have been forced to go about it.

The mitigation of social problems

Canada’s social problems are mitigated at least in part by our government, because culturally we see the state as a potentially mutualistic actor in the affairs of our society, and because the state has in turn acted mutualistically to some degree. This is to say that we see ourselves as active participants in ensuring that our government is effective in serving its people, not simply ‘leaving them to be,’ and our government has often obliged in this respect.

This not to claim the Canadian government is some sort of purely benevolent actor, nor to claim that any ideal relationship exists in which the state only serves its people and not to some degree specific interests. This is only to say that the state has as much potential to protect individuals’ rights as to oppress them, and that in Canada this potential is more readily recognised by the country’s citizens.

The point that a government with the ability to care for its people is as much a boon to individual liberty as a hindrance is easily illustrated. After all, there is little point in freedom of speech if one is too sick to speak and cannot afford to see a doctor; there is little point in the right to life if a mass killer can legally purchase a firearm to take that life away.

In the U.S., in contrast to Canada, the state is seen primarily as an antagonist to social liberty, and not without fair reason or historical precedent. America’s founding in revolutionary flames created a strong impetus to see the state, and particularly taxes as an apparatus of the state, as diametrically opposed to freedom.

It does not help that in many ways the U.S. Government is indeed an antagonist to its citizens and so there is good reason to distrust it. As Rose pointed out to me when I mentioned I was writing this piece, for all our similarities, there are aspects of the American experience that many Canadians simply do not understand; having to know how to suture a wound, or make a homemade epi-pen, not having seen a doctor in years; the constant fear of police brutality if you try to protest a poorly constructed and broken system. As she puts it, ‘the government is something people have to work around in the States’ – Americans implicitly know it is not there to help them – and there is very little feeling that anything they do to change that situation actually matters.

But, while the average U.S. citizen may not view their state as a means to their ends, lobbyists have had more than their fair share of influence over it. The alt-right have similarly identified the acquisition of political power as a way to satisfy their objectives – a problem now making inroads in Canada as well via alt-right support for candidates like Doug Ford.

In the very void created by the alienation of the American citizenry from their state, powerful and hate-fueled interests have rushed to fill every corner of influence they can dominate. No matter one’s views on government, the state is here to stay for the time being, and for as long as it exists people who want power will want power over it.

This present reality hasn’t deterred a growing body of people from viewing government, in a general sense, as a means to protecting and serving the enrichment of human life. There are everyday more and more voices in the U.S. who, whether calling out the NRA on gun law lobbying or fighting for accessible healthcare, are ultimately negotiating what a more mutualistic relationship with their government might look like.

The myths we need, the lies we don’t

I will not argue against all aspects of the Canadian mythos of kindness and good will. We need our myths to an extent, but only to the extent that they drive us to be better. However, if we wish to truly embody the ideals which our Canadian identity lays out then we need to be willing to confront those situations which challenge our ideals.

In our relationship with the people of the U.S. this means extending a helping hand, and being ready to learn, rather than simply sitting by with cold fascination as events unfold – even if the U.S. government itself has closed its doors to reason.

We must differentiate between the supposed ‘populism’ that helped bring the current administration to power, and the actual power and influence the U.S. citizenry hold over that administration with its ties to wealth and privilege. Most Americans are unaware of the impact U.S. foreign policy has on us because most Americans are not even able to influence their own domestic policy for lack of means or access to accurate information and opportunity. This is not to say that they are not trying, despite the struggles many Americans face merely to survive.

Our best path forward, for both nations, is not to hide in the mountains but to engage people south of the border on common ground and confront our social and political problems together.

After all, that would be ‘the Canadian thing to do.’ 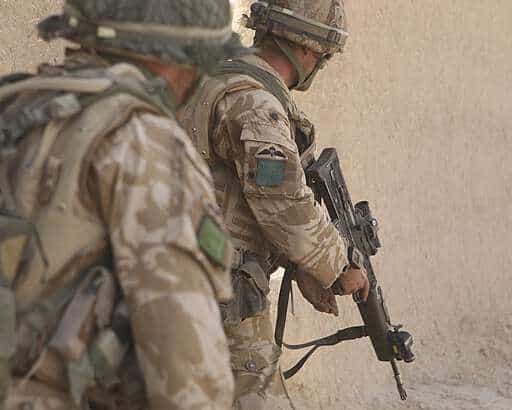