Expecting more from the Minister of Justice

A tale of sexism, denial, and totally justifiable public outcry

What does a can of Pabst and everyday sexism have in common?

They’re both unpalatable, un-Canadian, and yet still manage to show up everywhere we go.

It’s been a turbulent month for Peter MacKay’s public musings on women and the world. Canada’s Justice Minister has consistently insisted that sexism can’t touch him, yet the evidence suggests otherwise. And the way he has chosen to contribute to important discussions regarding motherhood and work doesn’t exactly make me want to jump around singing “Oh Canada”.

In the past few weeks while many Canadians have been busy preparing their Canada Day celebrations, Peter MacKay has been busy flopping in the media relations department. Actually, it’s more like a flop in the all-women-of-Canada-relations department. No matter how progressive or gender equality-focused he may think he is, he’s shown us that he’s got a pile of learning left to do. Sadly, a headstrong focus on defending his ego is making the situation worse, and he’s yet to realize that.

While attending an event with the Ontario Bar Association on June 13, the Justice Minister responded to a question regarding women and visible minorities in federally appointed courts in a way that reportedly disappointed and frustrated many people in the room. Drawing on his own family situation, and his flaky understanding of why women are underrepresented, MacKay suggested that more women simply need to apply to become judges, but that the special maternal bond they have with their children ultimately makes the job unappealing.

When asked about his comments to the Ontario Bar Association regarding women and judgeships, MacKay told reporters, “In early childhood, there’s no question that I think women have a greater bond with their children. And as far as more women applying to be judges, we need more women to apply to be judges, it’s that simple.”

A few days passed, and then national media found themselves reporting on Mother’s Day and Father’s Day letters that MacKay sent to his staff, which also revealed sexist attitudes. Copies of the letters have been published online. I recommend you see for yourself, but in a nutshell: mothers were celebrated for domestic duties like packing lunches and changing diapers, whereas fathers were commended for shaping the minds of tomorrow.

Could these letters serve as evidence of a cultural problem? A leadership problem?

I personally feel that the Justice Minister is maybe not trying to condescend to Canadian women, but that doesn’t mean he’s right. What I see in his comments about women and judgeships is an awareness that women do in fact bear children, and pregnancy is not always sunshine and roses. Hypothetically giving him the benefit of the doubt, he might even be looped in to the fact that women face different barriers than men when it comes to employment and leadership, which can relate to child bearing and rearing.

Same goes for his letters to the staff on Mother’s Day. Saying that many mothers are extremely hard working people, and that the unpaid work of child rearing (which again, has more often been systemically assigned to mothers) deserves recognition and celebration, is all good stuff.

What the Justice Minister failed to include in his comments is some insight into the roots of systemic sexism, and what may be done about it from a government perspective. In fact, he failed to address the diversity-on-the-bench issue entirely. So now we are all left to wonder: why? Did he not discuss this because he doesn’t fully understand the problem? Does he not believe that women belong at the bench? Are issues of gender discrimination and glass ceilings not worth his time? The more he tried to defend his comments – to reporters, in the House of Commons, on his website – the more he disappointed the masses.

As for the special occasion letters, how does commending mothers for packing lunches, instead of “shaping the minds of the next generation of leaders,” not demonstrate a level of gender bias? Why didn’t the fathers receive congrats for juggling diapers with dinner, and the mothers get high-fived for shaping the leaders of tomorrow? As a Member of Parliament and as Justice Minister, what does this say about Canada’s current leadership and their commitment to gender-based issues?

It’s important to have fair expectations of people. When you find yourself disagreeing with someone about something you’re passionate about, it’s helpful to bear in mind how their worldview has been shaped. Access to resources and opportunity is a big factor in a vast country like Canada where the income disparity is so high. Which is precisely why many Canadians feel little-to-no patience for federal politicians who are extremely well resourced with money and staff, yet can’t be bothered to show those they represent that they are listening. There are countless underfunded community-based organizations all over the country that succeed in educating their staff and volunteers on these very issues, so why can’t the Justice Minister and his department get its act together?

Erasing an out-of-touch reputation isn’t as simple as Nazanin Afshin-Jam MacKay (his wife) writing a letter to the Globe and Mail outlining his ability to sew. Nor is it as simple as his attempt to excuse himself by pointing out that the letters staff received on special occasions were actually written by female staff. These attempts to appear supportive of women are about as effective as MacKay dressing up in a leotard and dancing to Beyonce’s “Run The World” and putting it on YouTube. MacKay cannot overcome the criticism he has received by pretending to be immune to systemic sexism, especially when his actions show us otherwise.

A pattern has developed in how MacKay addressed these recent issues. Seeing him throwing his staff under the bus, and swearing he didn’t say it or didn’t do it, gives Canadians little reassurance.

The late Maya Angelou said, “When someone shows you who they are, believe them.” Politicians are no exception.

Mistakes, #fails, and blooper reels like MacKay’s June 2014 will continue to happen, which is why we need to pay attention to how these moments are managed by the people accountable. When they show us who they are, it’s important to believe them. By missing an opportunity for professional growth at a time when resources and information are more accessible than ever, Peter MacKay has shown us who he is.

And judging by the response of outrage, it looks like many Canadians believe him. 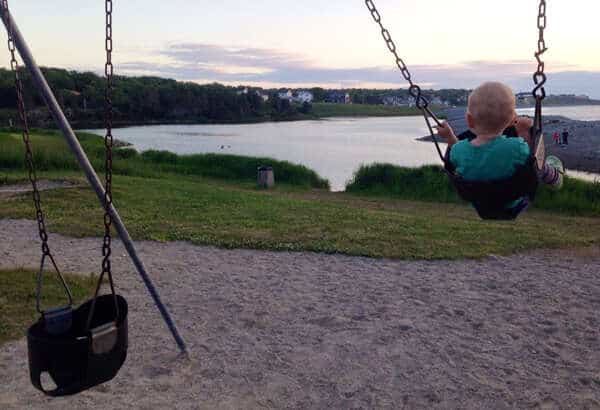 Living up the babymoon, again
Just like in marriage, there are blissful periods of parent-child relationships...