Growing up bisexual in the Big Land made me who I am. Never once did it make me feel small because of who I loved.

My story of growing up LGBTQ in Labrador isn’t the angst-ridden terror one might assume comes with small town living. I never had any gay panic, I never had a big “coming out,” and I never felt any persecution growing up. That’s not to say it was all roses and cupcakes. I think anyone growing up—straight or gay or anywhere in between—at some point questions their sexuality and orientation. I was just lucky enough to have a family who openly supported not only me but the entire LGBTQ+ rights movement. I also never tried to hide what I liked. Sure, there were “friends” who thought that gay people were “gross,” but all told they were few and far between.

I have been very lucky. I applaud those that had to fight tooth and nail to gain acceptance from their loved ones. Their strength astounds me. I truly hope that one day in the future, childhood stories like mine are the “norm.” No one should have to fight other people’s demons on top of their own.

I was relatively young when I realized girls were just as interesting to me as boys. My very first kiss was with a girl. I never hid that I kissed a girl and I liked it. But I wasn’t grabbing a rainbow flag and parading in the streets. I knew my small town had gays, but it was something whispered about and ridiculed. When there are only 600 people in a town and 95% of them are related, it’s hard to not only keep a secret but to ignore rumours as well. So everyone knew there was a gay population in our town: we just didn’t talk about it.

In my childhood, television consisted of CBC and Saturday morning cartoons. (If anyone can point out a gay icon on CBC in the 1980s, you are a hero.) Sex Ed didn’t start until grade 8 and was more concerned with scaring us into abstinence than exploring the Kinsey Scale. For years, I didn’t have a name on my sexuality because there was only gay or straight. Yet here I was smack dab in the middle. It would be years before I learned the term bisexual and decades more before I learned, and embraced, being pansexual. I guess I can thank Miley Cyrus for that, ironically enough.

Surprisingly, the most uncomfortable I ever felt about being “out” was when I left my little Labrador town and started going to Memorial University in St. John’s.

I was in total culture shock the first few years, so being openly bisexual wasn’t even on my agenda. I lived with my boyfriend at the time so I appeared “normal” to the outside world. Once I moved out and met my new neighbour, however, things changed drastically for me.

M. was newly out and so proud she sprouted rainbows from her ears! She still struggled: her parents had disowned her and her sister was constantly trying to “fix” her. Yet she joined the LGBTQ group at MUN, she went to the gay bars, and she met a fantastic woman who was helping her take on the world. I looked at M. and I saw someone who deserved to be recognized for her struggle. Certainly not me: someone who was quietly checking out girls but never had the guts to talk to them.

But I let M. drag me into the rainbow parade with a sense of bedazzlement and some rose-coloured glasses. I joined the LGBTQ group, I wrote queer fiction for a local gay handbook, and I finally talked to some girls!

But after all the good, I saw the nasty.

It started in downtown St. John’s, of course. Drunken men making crude remarks about two women dancing close together. A sneer from a girl at the bar when I kissed my girlfriend. Even a night that ended up in the hospital because two guys saw me and my girlfriend sharing a kiss and decided that made them want to take us home with them. (Luckily, I had two guy friends who were more then willing to stick up for us. Unluckily, one of them ended up in St. Claire’s with a broken jaw because some Neanderthal felt entitled to live out a fantasy of having two women in his bed.)

That was the nasty: that was the underside of society that scared me. I started to only feel comfortable going to the gay bar downtown. I wrapped myself in a blanket of rainbow solidarity.

It worked for a while.

The first time I felt backlash from the LGBTQ community came, surprisingly, from M.’s girlfriend (B.). One day as we were sharing coffee, I received a text from a guy I was interested in. Being young I was wrapped up in that new relationship mojo and stared stupidly at my messages with a lovestruck grin on my face. Immediately B. picked up on it. Teasing ensued and I told them it was a guy I was talking to.

“No, I’m bi.” I shrugged. It was no secret I was hiding; B. had just never seen me with a man before.

“There’s no such thing,” she proceeded to tell me. “It’s just people too scared to come out of the closet all the way.”

I was shocked. Totally and utterly shocked that someone who struggled to be accepted daily could say that to me. But soon I realized that not only did many members of my “community” agree with her, but now I was being pressured to “be honest” with myself: I had to be either gay or straight. There was no other option.

Ultimately, I left the community. If “they” thought I had to be one or the other then I couldn’t be part of their group at all. Out of all my difficulties, that was by far the worst. I was being ostracized by a group pledged to acceptance for all. Even though back home in Labrador rumors were floating about my not-quite-straight ways, I was feeling more outcast by the people supposed to embrace and support me.

But life went on. I dated whom ever I deemed fit and eventually moved back home. I had a few people in my little town ask me if it was true: was I really gay? I took the time to explain that no, I wasn’t gay, I was bisexual (later pansexual). Sometimes it drew more questions, sometimes it resulted in proposals for threesomes—I like men AND women, not ALL men and women—but usually people accepted my explanation and went on their own merry way.

Now, I’m not naïve enough to think everyone who accepted my explanation were all immediately blessed with acceptance and enlightenment. I’m sure there were rumours and whispers behind closed doors. But no one ever said anything to my face, and not once was I ever put down or bullied..

I’m not saying small town Labrador is covered in rainbow flags and PRIDE stickers. If I had been a gay man I’m fairly certain my journey would have been very different indeed.

I do know that today people are far quicker to preach their homophobia due to the wonderful world of social media. I can tell exactly who in my little town is a raging homophobe thanks to Facebook, whereas when I was small I never knew anyone’s opinion on anything. Thanks to keyboard warriors who think what they say online doesn’t translate to the real world, I am afraid for children growing up in my small town. I can’t imagine being a teen, dealing with hormones, school work, social pressures—and also knowing that if you “come out” the entire town will have it posted online in a matter of hours, and neighbours will condemn you without ever looking in your eyes.

Everyone has a different experience and everyone has their own story. Mine was simple: I like what I like. My only goal is to help educate not only the straight community but also the LGBTQ+ one as well. I want my children, my children’s friends—even strangers on the street—to be able to come to me and talk about their sexuality and ask any questions they may have.

Don’t be alarmed if you don’t fit into a single box or definition. No one can tell you what you like: you have to explore yourself and find what fits. I identified for years as bisexual until the term pansexual became more prevalent and my world opened up a little more. Having a label doesn’t comfort everyone—some people openly defy definitions. But for me it was a comfort to know I wasn’t completely alone in my desires.

I am 37 years old, married to an amazing man—also from my home town—with 3 beautiful children. I am a Métis woman who enjoys researching my genealogy and my native roots. I pick berries, I fish, I force my children to the cabin where we have no power and no running water. I am a writer, a TV enthusiast and a very proud daughter of the Big Land. And with all this I am also pansexual.

Growing up in Labrador made me who I am. Never once did it make me feel smaller because of who I loved. 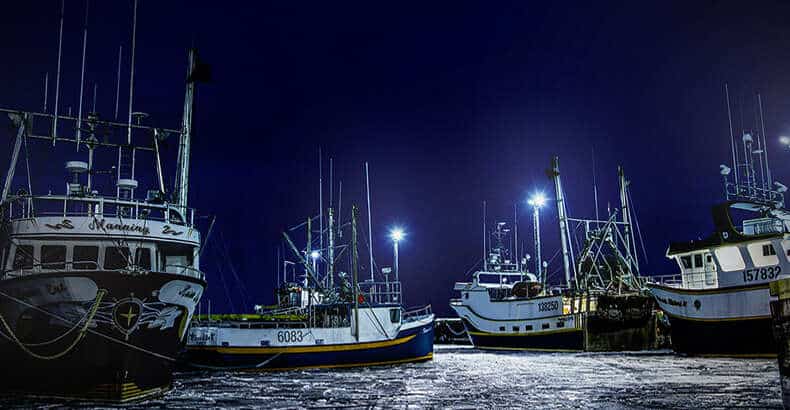 The Future (of Fishing) is Female
Women have been the backbone of the Newfoundland and Labrador fishery for centuries. Earning that recognition is reshaping the maritime world.