We all need Lee Maracle and her stories, and her refusal to ask permission for taking up the space that belonged to her, now more than ever.

In the space of just one small conversation, Lee Maracle forever changed the way I think about rivers. She had a habit of doing things like that to the people she talked with—and I was no exception. She brought you up short, unearthed your assumptions. In fact, every time I talked to her—in her backyard maybe, or on the phone, or at an event—she changed the way I thought about something.

I’m part of a community of writers, family, and other relations who are mourning Lee Maracle, who died on November 11, 2021 in Surrey, British Columbia. She was a writer and member of the Stó:lō Nation who demanded change in the world of publishing and insisted that Indigenous voices be heard. At a time when publishers did not see value in Indigenous voices, she insisted that people wanted to hear and should hear those stories and in 1975 she published the autobiographical novel Bobbi Lee: Indian Rebel. Her work won numerous literary awards, including being named to the short-list for the 2020 Neustadt International Prize for Literature, one of the world’s most prestigious literary awards, for her novel Celia’s Song.

She supported and loved so many writers and I am happy to have been included in that group. She adopted me as auntie and sister and I could do no less in return and for that reason I struggle to write this piece, to put into words what there aren’t any words for. I can hear Lee laughing at me for this. That’s what writers do, she might say. I don’t think Lee has ever been at a loss for words.

She liked to tell people that her career in stories began with a lie. It’s a detail I loved to hear every time I heard it. She can make a great story out of the expressions that passed over her grandfather’s face as he processed the fact that she’d lied to him for the first time, this “bratty” (Lee’s own words describing herself) little Stó:lō girl. He passed through anger and moved on to something else and finally said, “That’s a good story.” She said her grandfather and other elders trained her to listen to, memorize, and then retell stories.

I met her when I was a grad student, after a professor emailed to say they were bringing Lee Maracle in to read from her new poetry book and to speak at an event. Would I introduce her and go to dinner with her and a few others? All Lee needed to hear over our fish dinners and chocolate cake was that I am Métis, that my family are descendants of the Goulet family from the Red River, and then we were swapping hilarious stories like old relations. You see, Lee’s mother was Métis, from a community a ways north of the one I’d lived in as a kid in Alberta. We were family. That’s one of the reasons Lee is so deeply missed: she has family everywhere.

Lee explained to me once over the phone how she was related to rivers. She comes from river people, she said, and that’s why she is the way she is, crashing literary circles and demanding to be let through the barriers and never hesitating to bring the kinds of trouble the literary world needed and still needs. That’s what she said.

Now, I thought about that a bit before I asked her about it. I’d always thought of myself as a river person. Rivers show up in so much of my writing. They’re a part of my life.  There are rivers I always walked alongside, swam in, listened to. I go walking along the Rennie’s River here in Newfoundland and Labrador almost every day and I talk with her. I didn’t quite understand the kind of river she was comparing herself to, but she knew the kind of river I was. After my book of poetry was published, she said to me that my poetry sounded like her mother talking and I can see that’s how we became friends. I saw a bit of my grandmother in her and she heard a bit of her mother in my poetry.

And yet, the river my people belong to is the Red River, a slow, meandering prairie river. At that point, that was a river to me and that didn’t fit with what I knew about Lee. I told her this, or a version of it, and she laughed at me. She laughed at me a lot, really, and I think it’s the nicest thing to be laughed at by someone when they do it the way Lee did. Anyway, when she was done laughing she told me that the rivers her people belong to come thundering down mountainsides, rivers that rush and roar and, make no mistake, the land makes way for the changes they demand. I laughed then, at her, and at myself.

I understood myself in a different way then, too. Just as I understand now what Lee wants from me. You see, it’s my turn to make others uncomfortable in my own way. And to Lee I say, I won’t do it like you do because I can’t, I’m a slower Red River and it takes a lot of time for me to get to flooding. But we do erode things and we do change things and I’ll do my damnedest to make you proud.

One thing about the kind of rivers Lee said she came from—they don’t do anything like ask permission. I’ve been thinking about this a lot since she passed, how a large part of her life was teaching other Indigenous and minority writers how to refuse to ask permission of the establishment, but just to let our stories cascade, let them shout and take up all the space they need. She lifted us all up and we all stand higher because she established the ground—or the riverbed—on which we are all releasing our stories.

She’d called me about two weeks before she passed. I got to telling her about some new writing I was doing and about how busy I was and sometimes couldn’t find time to do the writing I wanted to do. She brought me up short right there: she said I worked all my life and never missed a day of writing. And she said I didn’t have to be asking her about writing, “why are you asking me—you’re my competition now,” she said. It was a joke. Of course Lee was and always will be in a class by herself and she knew it. Yet, there was a story dropped into that sugary lie, if I was ready to hear it. It stung a little too, because I knew she was right and that I was going to have to learn to be better than I was, than I am. She was telling me I needed to stop asking permission, that I needed to charge ahead with my own stories. The only people I needed permission from, in her opinion, were my ancestors and my descendants. What she was saying to me is this: little prairie river, you’re big enough to flow on your own, you don’t need me anymore. That one time, though, I think she was wrong. I do need her. We all need Lee Maracle and her lies and her stories, and her refusal to ask permission for taking up the space that belonged to her, now more than ever. 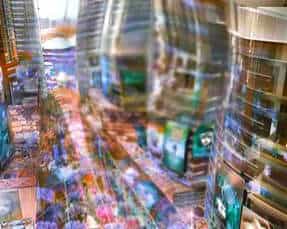 The feedback loop between cars and housing

“What is a Story For?”: Michelle Porter, Journalist-Poet
Michelle Porter talks with the Indy about her debut book of poems, writing with purpose, journalism's place in her poetry, & her favourite Métis literature.