International and graduate students this year, undergrads will be next

Memorial University is set to increase tuition for international students, graduate students, and medical students, as well as raising residence fees for those living on campus, to try and make up for a $20 million decrease in funding from the provincial government.

Specifics of the university’s plans are sketchy, though information has been leaking out of meetings between student unions and Memorial’s president Gary Kachanoski. As reported in the student paper The Muse, and confirmed at a Memorial senate meeting on May 12, 30 per cent tuition increases on international and graduate students will attempt to make up $4.8 million, while 30 per cent increases in residence fees will attempt to make up $1.9 million, or a combined $6.7 million of the $20 million in cuts to the university’s funding.

Student union leadership has also suggested the university’s administration has been intransigent with respect to the possibility of negotiation or collaboration and appears to be marching in lock-step with directives from the provincial government.

To understand the strategy of the tuition and fee increases for students, it is first worth noting that the university has different sorts of budgets, namely capital and operating budgets. The capital budget includes the construction of new buildings, like the new $325 million science building, and so no one should be surprised that later this year another major construction project will be underway on campus.

This is just to say that the issue is not that the university is broke, but that money is directed in particular ways.

The university will attempt to make up this $20 million shortfall in various ways: cuts, fee increases, consolidation of services, perhaps layoffs or job attrition. However, what should be immediately apparent to those who have been following the province’s 2015 budget is that $20 million is a drop in the bucket compared to the $1.1 billion deficit the province is expected to run this year.

The province could have absorbed this $20 million into an already outrageous deficit – which is really the fault of financial mismanagement by government — and it would have made little overall difference. But the decision was made to cut funding to Memorial and to raise tuition on some students. Why?

The obvious answer is that government is telegraphing its intention to continue a series of cuts over the coming years. The current round of tuition and fee increases are merely the opening salvos of what will be a continuous stream of the same. It is likely that after the next provincial election, later this year, the PCs will fall and a different party will take up the reins of government, but this does not mean a new government will pursue a different course, and perhaps will feel compelled after seeing the true state of the province’s finances to attempt to impose severe austerity measures across the board.

In short, next year’s budget can be expected to cut deeper into Memorial’s operating budget, and raising undergraduate tuition (the only group unaffected in the current round) will be in play. Tuition and fee increases this year are a cynical attempt to divide the student population into manageable groups in order to mitigate resistance. And it is for this reason that student unions, and the student population generally, must make a decisive stand here and now.

Worse than the attempt by government and university administration to divide and conquer is that their strategy deliberately targets those who are most vulnerable. International students are in a precarious position because they have so little political agency in Canada. They will likely feel as though they cannot speak out for fear of being branded as subversive or ungrateful for the opportunity to study at Memorial.

International students and graduate students will also feel vulnerable since if they protest or speak out they may be easily washed out of their academic programs or departments. Whether this would actually happen is less important, from the perspective of university administration, than the fear it will induce – the university has many hierarchies and differences in power that can keep students in check.

Increasing residence fees for on-campus housing is likewise preying on vulnerability, since many students (and their parents) do not want to have to deal with the pitfalls of finding rental accommodation off-campus, preferring instead the stability and relative security of residence life.

Why (and how) students should fight back

Perhaps the most harmful aspect of the financialization of the university (of turning the university into a business) is that it understands education as a relationship between a consumer (students) and a service provider. The most common rationale for increasing tuition at Memorial is, and will continue to be, that students pay the lowest tuition in the country and, thus, an increase is only reasonable.

However, as anyone who has taken a first year education course can tell you, the service provider model is not the only way to understand education. It is not my intention here to write an essay on pedagogy, just to point out that the constructivist theory of education suggests that knowledge is created, rather than being something that exists somewhere out in the world to be hunted down and captured. Two of the many well-known modern theorists whose work is inspired by constructivist approaches include Paulo Freire and bell hooks.

If we understand education as a collective project of producing knowledge, then students are actively involved in this project and are essentially workers in a field. Not only should there be no tuition, but students should be paid a fair wage for their work. It’s all about perspective.

Of course, many will scoff at this even though constructivism and critical pedagogy are basic elements of contemporary theories of education. Even though it is highly unlikely the university will entirely drop the business model, it is nonetheless important to remember that tuition is by no means necessary or given except according to an ideological perspective, and that this financial model of the university is not universal.

Our goal, as students, should be not only to maintain a tuition freeze, but to have no tuition at all. On an even more basic level, in terms of negotiation and compromise within the current understanding of the university, why should students be expected to make concessions for nothing in return? What additional services is the university offering for increased tuition and fees? It is a basic element of negotiation that one side will not give up what has already been won for nothing in return.

What we need is a united front of students at Memorial, solidarity in the face of a divisionary strategy by government and university administration. We need to popularize alternative ideas of what it means to be students and the role students play in creating knowledge. We need to get organized and demonstrate that we can and will fight back.

Because if this current attack against students succeeds it will be all the more difficult to resist down the road.

There will be a meeting for students this Thursday at 6 p.m. in Engineering 2043 to discuss the issue of tuition increases and decide what is to be done. Come out and show your solidarity with the student cause. More information is available here. 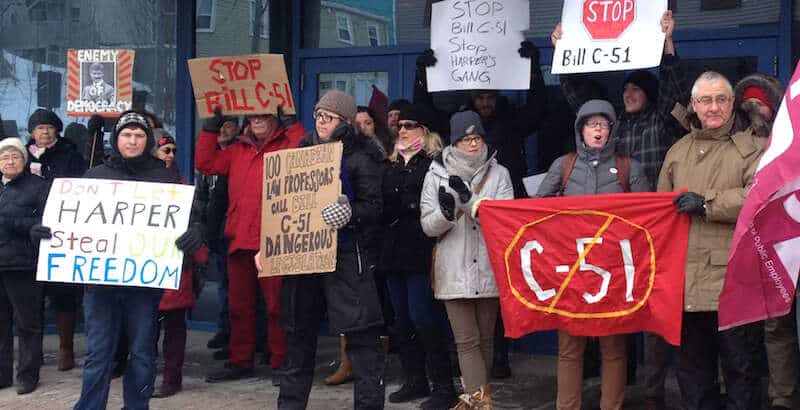 Harper’s “anti-terror” law one step closer to reality
Against nationwide opposition, the Conservative Government’s impending “anti-terror” legislation passed its third reading in Parliament last week with the support of most Newfoundland and Labrador…

After Alberta
The NDP victory in last week's Alberta election shook that province and the country. But what does it mean for the federal NDP and the…