Nothing to see here

It is curious so many people should be upset about the supposed corruption that precipitated Nick McGrath falling on his own sword.

Perhaps it has become fashionable to hate on the PCs, but one aspect of the recently released Auditor-General’s report into the so-called fiasco involving Frank Coleman’s former company, Humber Valley Paving (HVP), demonstrates the redeeming qualities of the PC government.

The Auditor-General notes, “The process to consider, evaluate, decide, draft and execute the mutual termination of the contract related to Project 1-12 [HVP contract] occurred within a period of approximately 7 ½ hours.”

Seven-and-a-half hours! If that’s not efficiency, I don’t know what is. I can’t think of any other government agency that operates at such breakneck speeds. Shouldn’t we, in fact, be commending McGrath and the entire bureaucracy at Transportation and Works for the expediency with which they made decisions? And for all of that to take place the very day before the deadline for PC leadership nominations – McGrath must juggle knives for fun in his spare time.

I imagine all contractors submitting paperwork to the department must be equally pleased with this level of service, and they should really speak up about it.

Now, you may soon hear calls from opposition politicians for further inquiry, and with this I wholeheartedly agree. We should most certainly find out exactly how McGrath and his department were able to achieve such decisiveness with regard to the HVP issue, but also conduct a thorough investigation of all contracts awarded by the department during McGrath’s tenure.

After all, we wouldn’t want to miss out on such a wonderful opportunity to re-evaluate the long-term contributions of such a productive politician.

And since we’re in the re-evaluating mode, what about all those other prominent PCs to have fallen on the sword? What of Jerome Kennedy, Charlene Johnson, Terry French, and Joan Shea? What a wealth of experience lost; what a tragic waste. And why? Because John and Jane Q Public need their daily dose of scandal? Because the sharks in the media pool need their pound of flesh?

It will be all the more a pity if Kevin O’Brien decides to hang up his hat, as an increasingly angry mob is demanding.

And then what of the lamentable fate of the recently fallen premiers, Kathy, Tom, and Frank (the premier who never was), those servants of the people who stepped up in a time of need? Will newly appointed premier Paul Davis need to fall next to satisfy the insatiable appetite of the partisan hounds?

Where does it all end? Pretty soon, and unless some semblance of sanity is reintroduced to provincial politics, there will be calls coming from all corners for a general election, voices whispering the government has no legitimacy and no moral mandate to rule.

Would it in fact be better to call the election now, so that at least David Brazil can hold onto his seat?

I don’t know, but one thing is for sure: it’s looking more and more like the death knell of a political career to become a cabinet minister in the PC government, and that’s soon going to have to change.

We really can’t afford to lose any more good people.

It’s hard to change everything
We're doing pretty well for ourselves, even if it is killing the planet. Bringing about change is going to be harder than we like to… 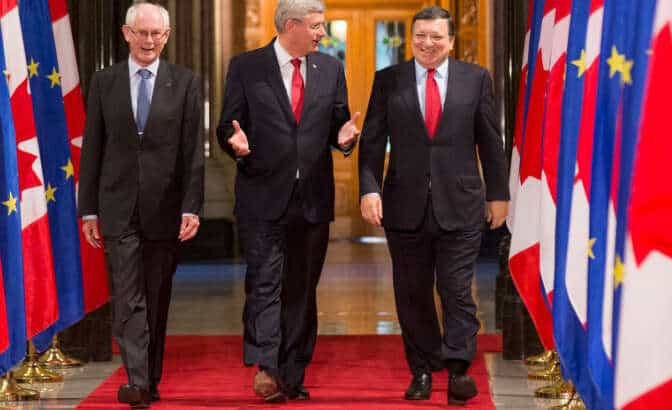 The threat of CETA: trade, investment and workers’ rights
The damage CETA will wreak on our economy and our democratic rights is unprecedented. But it can still be stopped.