‘An impotent form of communication’

A rant against random acts of vandalism and other useless activities

While living in Rabbittown for the past year and a half I’ve observed first hand (and for the first time) the gentrification of a typical St. John’s neighbourhood. I have witnessed a number of old school family estates turned over to eager young couples; I’ve seen businesses renovate, struggle and close.

I have grown used to the now comforting and never ceasing smell of fish and chips. Hell, I’ve even grown immune to the barrage of sirens blaring every time there is a fire. St. John’s is quite flammable. I love the area and everything that makes it authentic with the exception of one unrelenting minority: skeets.

This was my boyfriend’s Facebook status this past summer. It was, in fact, in response to us discovering that the tires on the driver’s side of our van had been slashed while parked in the driveway. The mechanic at Canadian Tire had to inform us of this as we are not terribly automobile-inclined young adults. We had both assumed that I had driven over something on my way back from the airport earlier that morning. My sister was late for a flight, I was tired and the sun was blazing; these things happen, right?

Apparently they don’t. Or, at least, they didn’t, to us. What does happen, the RNC officer reassured me, is random acts of vandalism in the centre-city/downtown area during the wee hours of a weekend morning. Rabbittown. He confessed that the rear window of his own vehicle had been smashed out overnight as well, while nothing had been stolen. Skeets.

In my opinion, you personify this particular derogatory term if you brazenly stagger around slashing tires and breaking stuff mindlessly. You are the epitome of a public nuisance and the reason we’ll all end up under constant video surveillance. What’s more, you don’t even accomplish anything. This type of damage is covered by insurance, so beyond minor inconvenience and irritation you’ve merely put yourself at risk of being arrested. And for what? To appear hardcore to your buddies? Prove you’re a wild man afraid of nothing?

Thing is, if your buddies have even half a grain of sense, it’s likely they don’t think any better of you. I speak from experience. A friend of mine in Montreal went through a phase where side mirrors weren’t safe from his nightly tantrums (fueled by copious amounts of draft beer). He was totally indiscriminate in his choices too, pulling mirrors from Saabs as easily as Toyotas. Sometimes he would punctuate his rage by smashing the mirror down over the same car’s hood.

Did I think he was, like, the super-coolest guy I had like ever met in my whole entire life? No. I thought he was after losing his damn mind. I worried that the draft beer cast a crazy spell over him. I concluded every tongue lashing with some version of explaining how pissed I would be if it had been my vehicle.

And then it was.

The worst thing about having your tires slashed is that everyone you know assumes you’ve done something to provoke it, that you’ve brought this upon yourself somehow. Well, I say it’s not karma or anything like it. No dirty look or back-handed compliment warrants destruction of personal property.

Mind you, if by chance some vendetta fueled this particular incident and a message was meant to be delivered, I did not receive it and I declare vandalism an impotent form of communication. I don’t know who you are or why you felt slighted but an email or phone call would have been far more effective. I would add that if you are addressing all your aggravation in this manner than you had best probably forget about me. You obviously have far bigger problems.

It is more likely that this was just a random act perpetrated by someone who was, shall we say, not of sound mind and body at the time. It is far more likely that said perp. was, well, a skeet from the neighbourhood. A neighbourhood that I very much enjoyed but will no longer be a part of as I am moving west – west end, that is.

A separate reality
Separatists should not be treated as villains, but as responsible citizens looking to make Canada better 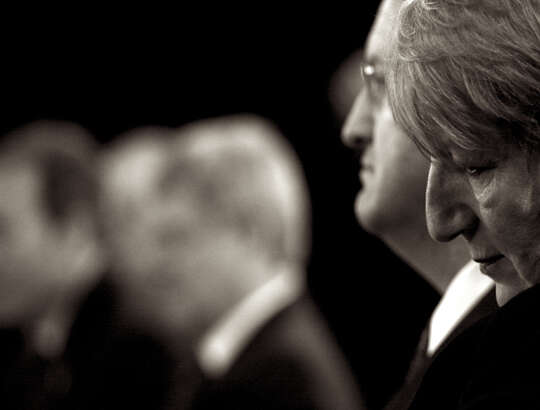 PHOTO: Our premier
A shot of our premier captured during our prime minister's visit