On this centenary of International Women’s Day, the Internet is abuzz with everything from thousands of events to Hillary Rodham Clinton’s Huffington Post video to many blogs filled with thoughtful reflection. One such thoughtful reflection worth highlighting is today’s editorial in The Toronto Star. It’s titled ‘A century of women’s rights: A struggle that continues’ and it’s a look at what was happening on the first Women’s Day, back in 1911. British suffragist Emmeline Pankhurst and her daughter were making waves in Old Toronto. And there was big news on the cover of The Toronto Daily Star — Pankhurst’s other daughter, declaring in London that the suffragists had embarked on a “real war” to claim women’s rights. In this piece, not only is Canadian history told, but also the related tale of the 223 British women who were arrested after their protest, vowing to trash the prisons from the inside. “The battle for equality was real, dangerous and waged with passion. The Pankhursts might well argue that even now it is only half-won.” 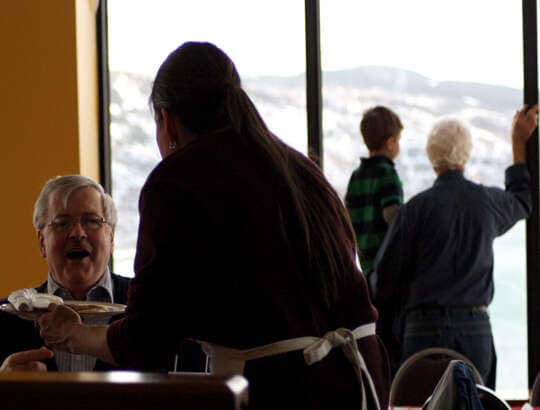 PHOTO: Pancakes and a view
Record numbers show up for the 7th annual CBC Pancake Breakfast at The Battery