From fashion crimes to menswear lines

As one of the most creative spots in Canada, Newfoundland and Labrador has more than its fair share of talented fashion designers. With designers like Charlotte Street and SECH Design, and shops like Model Citizens, Twisted Sister Boutik, Living Planet and Johnny Ruth, St. John’s has a concentration of creativity and designer ingenuity second to none.

But some of its very talented sons and daughters have gone on to pursue fashion careers away from home, and they offer some interesting lessons for those aspiring to a future in the fashion industry. Their position on the mainland also gives them an interesting vantage point from which to consider the burgeoning fashion scene in Newfoundland and Labrador.

From Gander to menswear design

Anthony Hill originally hails from Gander, and knew from a very young age where his interests lay. As a child he made outfits for all the dolls he could lay his hands on, and as a teenager began following fashion avidly. He took sewing lessons, and in 1998 made the move to Toronto to study at the International Academy of Design.

Six years ago he got his big break. He’d just returned from a brief stint living in England, and took a customer service job at Haggar Canada. He’d only worked there two days when his exceptional skills were noticed and he was recruited onto the design team. Today he’s the Menswear designer for Haggar, and he’s just finished designing a collection of men’s clothes that’ll be hitting the stores in September 2011. In addition to his work with Haggar, he’s also active designing costumes for art installations, film and videos.

“It was tough to put the runway dream aside so I could get relevant experience and have a job that paid my rent.” —Anthony Hill

His experience on the mainland has had its ups and downs, and a lot of that has had to do with coming to terms with the reality of the industry.

“It was hard finding which part of the fashion industry I belonged to. I had a naïve view on what I thought the industry was all about, there weren’t any lavish parties with supermodels and million dollar fashion shows. It was tough to put the runway dream aside so I could get relevant experience and have a job that paid my rent.”

It’s been an exciting ride for him, but through it all he hasn’t forgotten his roots.

“I’m a Ganderite!” he proclaims proudly. “Everything about Newfoundland influences me.”

A particular influence for him, especially as a fashion designer, has been Newfoundland’s mummering tradition. In addition to the fun of dressing up and dancing, the history and fashion of mummering intrigues him.

“The fact that you have to hide and change everything about yourself in the most creative and resourceful ways is exciting for me, especially a hundred years ago when there was no access to fabrics and trims like we have now. People would save old sheets, bottle caps, doilies, anything that could potentially be used for the next mummering session. I just love it.”

Like many of those I spoke with who work in fashion, the busy nature of their careers is a double-edged sword. On the one hand, it’s exciting and fulfilling, but on the other it means they’re all too rarely able to get home to the land where their dreams first took root. When he does get home though, he loves spending time in the growing number of downtown shops, checking out what styles they’re promoting and which lines seem to be selling. He’s optimistic about the future for fashion in Newfoundland and Labrador.

“There’s so much creativity in Newfoundland, I hope that a thriving fashion business could exist there. It would just need to be thought about in a different way, so other people in Canada and the world could access it. The business is very tough, you have to know it inside and out to make a successful go at it.”

“They need to study, and the best places to do that are outside of the province unfortunately.” —Anthony Hill

Hill wishes he’d had more encouragement when he was younger, and that he’d gone straight into fashion school rather than spending time on a university degree he ultimately didn’t need. Fashion design wasn’t an option on high school Career Day, he laments. If it had been, he probably would have headed for England or Paris right out of high school. He hopes that’ll change.

Advice for the aspiring fashionistas of the Rock (or Labrador)? Study, study, study. And then go for it!

“I hope more people see this as a possibility. They need to study, and the best places to do that are outside of the province unfortunately. You need hands on experience and the institutions at home just aren’t there right now. With fashion school, you have to do an internship with a company and really get your hands dirty and learn from the ground up – it’s invaluable experience.”

From St. Mary’s to Breakfast Television

Melissa Yetman never had any expectation she’d wind up in the fashion industry.

“My sister was always the creative one,” she laughs. “I was more of the math type.”

But it was her mathematical and accounting side that opened unexpected doors for her. She moved to Ontario in 2004, fresh out of MUN, and like many resourceful Newfoundlanders cycled through a range of jobs. She worked overnight in an aluminum factory, at restaurants, at HSBC. She was even a delivery driver for the Red Cross.

“I’d never driven in a big city before,” said the St. Mary’s native, laughing. “I was like… what’s this extra lane for?”

In 2007, she found herself in Toronto, and, after a moment’s hesitation, responded to an unlikely ad for Pam Chorley’s Fashion Crimes. 25 years ago, Pam Chorley was one of the first independent fashion designers to set up shop on Toronto’s Queen Street West.

Fashion Crimes is still one of the most striking venues on the strip, and visitors feel they’ve just entered a magical forest of colours, sequins, feathers, fur and masques. The business – which also features a full-scale studio where the dresses and outfits are made – had grown to the point she needed somebody dedicated to the administrative side of things, and Yetman’s skills in math, accounting, bookkeeping, management and administration proved just what Chorley was looking for. Indeed, she even put her MUN English degree to unlikely use, keeping a regular fashion blog on the shop’s website. In the Internet era, the blog and website are vital for any independent business.

No single path to success

Yetman represents a non-traditional approach to entering the fashion industry, and shows how it’s possible to direct an atypical range of skills and backgrounds to pursuing one’s dreams. When she went to the shop for an interview, she almost turned the job down, since the high-fashion environment was not at all what she’d envisioned as a career option. Yet she was intrigued both by the idea of drawing on Chorley’s experience in putting together a flourishing independent business, as well as the unusual nature of the shop itself.

“You gotta promote other local indie businesses, otherwise they’ll all be shopping at the Eaton Centre.” —Melissa Yetman

“There’s nothing like this back in Newfoundland. There’s actually not much like this in Toronto.” She laments the fact that Queen Street has now become awash in big chain stores, with many of the independent designers who made it fashionable now being edged out. Chorley’s one of the few remaining success stories. As we’re talking, a customer interrupts us, looking for a type of shoes that the shop doesn’t carry. Yetman excitedly discusses shoes for a few moments with her, then directs her down the road to another indie business.

“You gotta promote other local indie businesses,” she emphasizes. “Otherwise they’ll all be shopping at the Eaton Centre.”

Although she’s still a math girl (taking night courses for her CGA) she’s immersed herself in the world of fashion. Staff have frequent opportunities to model the shop’s designs, and she’s found herself at celebrity fashion events she never even dreamed of. “Three or four years ago, I never thought I’d be on Breakfast Television, or hanging out with Tom Lister Jr,” she says, with her infectious laugh. “We’re like walking billboards for the shop. We all help out wherever we can… we’re like a little family here.”

Her St. Mary’s connections work well for the shop too. Whenever she hears a bit of a down-home accent, she immediately asks where the customer’s from (on the strength of an accent, she recently discovered a customer shopping for a wedding outfit was her cousin’s best friend). She was delighted when the store hired on Amanda, another Newfoundlander. “We kind of did the high-5 and were immediately best friends,” she recalls.

“It’s much more than retail. It’s little pieces of art. I never used to look at fashion that way.” —Melissa Yetman

Yetman’s using the opportunity to learn everything she can about a field she never thought much about while growing up. “There’s so much I’ve been able to learn: how a set works, how styles work, what different kinds of fabrics do on a body. It’s much more than retail. It’s little pieces of art. I never used to look at fashion that way.”

Now, when she returns home, she also checks out the local Newfoundland fashion scene in a very different light. Like the others I spoke with, vacations home are too few and far between for her liking, and when she does get back she prefers to spend her time going out jigging for cod with her father. But she’s impressed with what she’s seen in St. John’s, and now she eagerly checks out suppliers, lines and markups (pretty much on par with Toronto, she points out). But the little things make her miss home.

“I was in one downtown fashion shop, and the owner just left us alone in the shop to go pay her meter. You’d never see that in Toronto. We never have just one employee in the store, and shops go under lock-down when they close.”

Yetman’s unique angle allows her to provide useful advice for aspiring fashionistas of the Rock. “Obviously educate yourself, but never sell yourself short,” she advises. “See the little things in a job that can give you great opportunities. There’s lots of opportunities, and just because you’re not working for one of the top designers in Toronto, there’s other ways you can get into the business. Success is about incorporating what you want to do with your life, but also compromising a bit. Just not too much. We need to be able to appreciate the learning opportunities that are in front of us.”

Pt. 2 of From fashion crimes to menswear lines will run Friday, May 6. 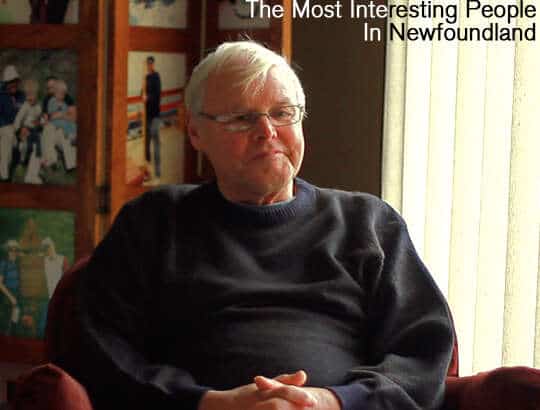 VIDEO: The most interesting people in Newfoundland | Randell Pope
This week Martin learns about some of the local fallout from the Great War from Grand Bank author, Randell Pope.