This bay girl has never heard it, but apparently, Lawnya Vawnya is a Newfoundland expression meaning, “having a good time at a dance party with plenty to eat.”

Here in town it is an exposition of independent arts and culture happening on the 20-24 of April. Lawnya Vawnya will showcase a number of mulch-disciplinary artists and musicians from Newfoundland, Canada and further afield.

The music festival is happening for the first time this year and is intent on celebrating artists and the art of socializing.Organizers are currently and continuously seeking patronage in order to ensure this is an annual event. Check out some of the music on offer below.

Kindness Killers hope to kill you with their kindness in an old time country way.

“We wanted to have a sorta country sounding band name but we’re generally pretty nice people so we tried to capture that to,” says Nick Ferrio.

“One of my favourite places I’ve ever played in my life was The Ship in St. John’s.” —Nick Ferrio.

The band was putting up posters in Corner Brook for a show at the Bar Room when I spoke with them earlier in the week.

“It just seemed like we fit in really well,” says Ferrio.
Though the Peterbourgh, Ontario foursome’s alternate musical projects are firmly grounded in folk, punk and rock, it is their shared love for old time country music that brought them together. The band credits George Jones, Loretta Lynn and Stephen Foster as influences. Favourite venues include the Company House in Halifax where they recently played due to the venues country focus and receptive audience.

Though the Company House isn’t the only venue close to Ferrio’s heart.

“One of my favourite places I’ve ever played in my life was The Ship in St. John’s. Just such a great venue, really good sound, really nice people. Some of my favourite memories happened in that venue.”

An unusual Newfoundland connection to the Kindness Killers stems from the fact that the band recently wrote a song inspired by a court case in this province, about Mary Harshbarger.

“We wrote a song about her so that’s one of our favourites. It’s kind of a neat story. I mean it sort of sounds old, like an old time song but it’s from a story that just happened,” chuckles Ferrio.

Kindness Killers have currently been on tour for two weeks and will remain on tour until August, taking them across Canada with two months in Europe. Staying fresh during such a tour will likely be a challenge for the relatively new band though their commitment to writing country classics that people enjoy while having fun will hopefully see them through.

You can step ‘er down to Kindness Killers @ The Rose and Thistle tonight. Check them out online @ http://kindnesskillers.com or @ http://www.myspace.com/thekindnesskillers.

Picking a band name was a difficult process for the crowd in Repartee though the eventual decision holds fast to a founding principal of popular music… rebellion. This particular rebellion was on that of Megan Warren’s (keys and vocals) who was frustrated by what she felt at the time were classical music’s limitations.

This rebellion occurred upon the heels of Warren graduating from university with the original band forming in the summer of 2009. The other founding members have since cycled out and into other projects (such is the way of the music scene) leaving Warren as the lone original member. The current line up includes Robbie Brett (guitar and vocals), Tyler Lovell (bass) and Keith Harding (drums).

Repartee is a keyboard-based pop band with garage rock elements and have been compared to You Say Party, The Killers, Lilly Allan and The Strokes. These comparisons rightly double as influences along with Phoenix and Weezer. The Rock House and The Ship feel like home plate venue-wise and shout-outs go out to Tony Murray of both.

“Of course, we love working with Tony Murray who works with both of those venues. He has been so wonderful to us and has really helped us out since we started. Those are definitely the two venues we play the most.”

Stand out shows include opening for Hey Rosetta! in February which introduced the band to a new audience. Repartee has played with a number of local heavy hitters including Pathological Lovers, Matt Hornell and The Diamond Minds , Say Fire, Mark Bragg, and The Novaks.

“We’ve been lucky to play with some incredible bands from here and from away.”

Repartee often closes each show with a catchy, upbeat tune called IheartNY, inspired by a post-grad trip Warren took to NYC in June of 2009. Overwhelmingly, though, Repartee is grateful and energized by the amount of generosity and support they have received from other musicians in town.

“We’re so fortunate to have such a wonderful scene here, I mean we haven’t had a bad show.” 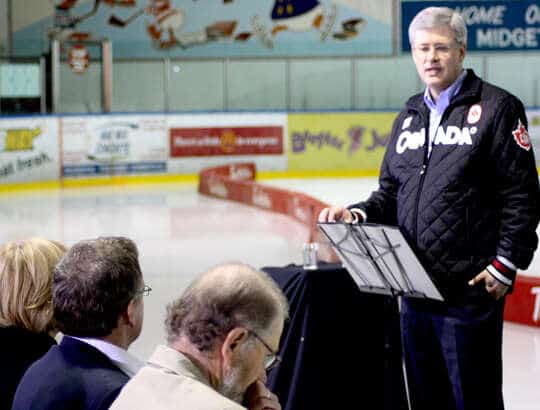 Harper stops in Hockeyville
Prime Minister makes a second visit to our province, appealing the hearts of hockey enthusiasts