Given the chance to interview Canadian cartoonist Scott Chantler, I was both thrilled and filled with angst. Scott has made quite a name for himself in the comics world. His most recent work, Two Generals, (the graphic biography of his grandfather’s experiences in WW2) was nominated for two Eisner Awards, distinguished by the CBC as one of the 40 best Canadian non-fiction books of all time, and was selected by comics powerhouse Françoise Mouly as one of the Best American Comics of 2012. And his comic series for children, The Three Thieves and his graphic novel Northwest Passage were also nominated for multiple prestigious awards.

Chantler agreed to chat with me about Two Generals, a comic, based on the 1943 diary of his grandfather, Law Chantler. It tells the story of Law and his best friend Jack Chrysler during World War Two. At the beginning of the book, the two young men from Ontario travel to England where they are trained with the rest of the Highland Light Infantry of Canada in preparation for D-Day.

“In the very early days of the project, I thought the book would just cover the material in my grandfather’s 1943 diary,” Chantler tells me, and yet, “the story grew as the research did.”

The book is divided into two parts. The first half focus on the infantry’s training for the invasion of Juno Beach on June 6, 1944. The second part deals with its aftermath and the lethal challenges faced by Law and Jack while in Normandy.

“The original idea was for the whole book to be about their training, the waiting, and the growing fear of the approaching invasion,” Chantler explains,“to me, that’s more interesting than the combat, which we’ve all seen before in movies.”

You won’t see extensive, graphic, and stylized depiction of violence in Two Generals. The comic does not shy away from the horrors of war and the trauma that are part of it, yet Chantler infuses his comics with a certain poetry that makes readers pause and think. He creates this poetry both visually and verbally through silences, rhythm, and poetic allusions.

“Comics do silence very well,” Chantler tells me. “Wordless panels,” in particular, create “a beat where the reader has a moment to think while still being in the world of the story.”

Just as Chantler’s drawings invite scrutiny and reflection, so too does his writing, which is charged with references. Verses of Thomas Gray’s “Elegy Written in a Country Churchyard” are found in the epigraph and on the title pages of each chapter heading. The title is also mentioned in a discussion that Jack and Law have as they visit a churchyard in England, a situation that actually occurred.

“My grandfather mentions the poem in his diary on the day that he and Jack visited the church at Stoke-Poges,” Chantler explains. “I read the poem, and was surprised at how well it dove-tailed with the ideas that were starting to take shape about Two Generals. It’s all about death, particularly the death of otherwise anonymous people. It really helped galvanize the book’s themes.”

The themes Chantler refers to are those of death and trauma, on one hand, and humanity and friendship, on the other. You can perceive these contrasting themes at play in the big events and even the most mundane scenes.

“Small moments are the most important parts of Two Generals,” Chantler says.

For instance, while they are training in England, Law and Jack travel to London for a day of fun. The day’s amusement quickly takes a dark turn when they stumble upon the scene of an accident: a double-decker bus has knocked down a woman and killed her, an event that reminds Law of his own brother Clarence, who was run over by a streetcar. These moments, which might appear small within the context of the war, tie the themes of Two Generals together through a balancing act that shows the co-relation between good and bad, positive and negative.

One such moment gives the book its title. While in England, Law and Jack have their photograph taken by another soldier. The picture shows the two friends wearing kilts and standing in front of a tent.

“I really love that photo,” Chantler says. “It’s one of the rare photos of the two of them together, and that it has this self-deprecating joke written on the back is just so personal and perfect.” The joke? Law’s tongue-in-cheek caption for the photograph: “Just an informal shot of the two Generals.” The photo testifies to the bonds of friendship, the caption to the wry disposition that sustained Law through the war.

Many non-fiction comics have been published that pay homage to war victims by telling their stories. This is why Chantler decided to reproduce the photograph of Law and Jack at the end of the comic.

“I wanted to include the real photograph at the end just to drive home the fact that the book is non-fiction – that this really happened to these two men rather than a pair of drawn characters.”

The real photograph adds truth value and authenticity to the story of Two Generals. Other comics also employ such devices, such as Art Spiegelman’s canonical Maus, about the Holocaust, which Chantler mentions as a source of inspiration for his storytelling. “I’ve always admired how specific Mausis. I wanted Two Generals to feel that focused and personal,” Chantler said. Mission accomplished.

Chantler will speak about his works at 7 p.m. on Friday, June 8that the Canadian Forces Station, St. John’s (102 The Boulevard). He’ll be joined by comics artists Jason Lutes (Berlin), Wallace Ryan (The Narrow Way), and Paul Tucker (TET). Free tickets are available at the Arts and Culture Centre Box Office; you must bring picture ID. There will be a Q&A with the audience and a book signing. The evening will launch War in Comics, an exhibition showcasing pages from these works as well as those of Mariam Katin (We Are on Our Own; Letting it Go) and Joe Sacco (The Great War). Curated by Irene Velentzas and Andrew Loman, the exhibition will run until July 1. For more information about the “War in Comics” event, please consult the Facebook event “War in Comics.” 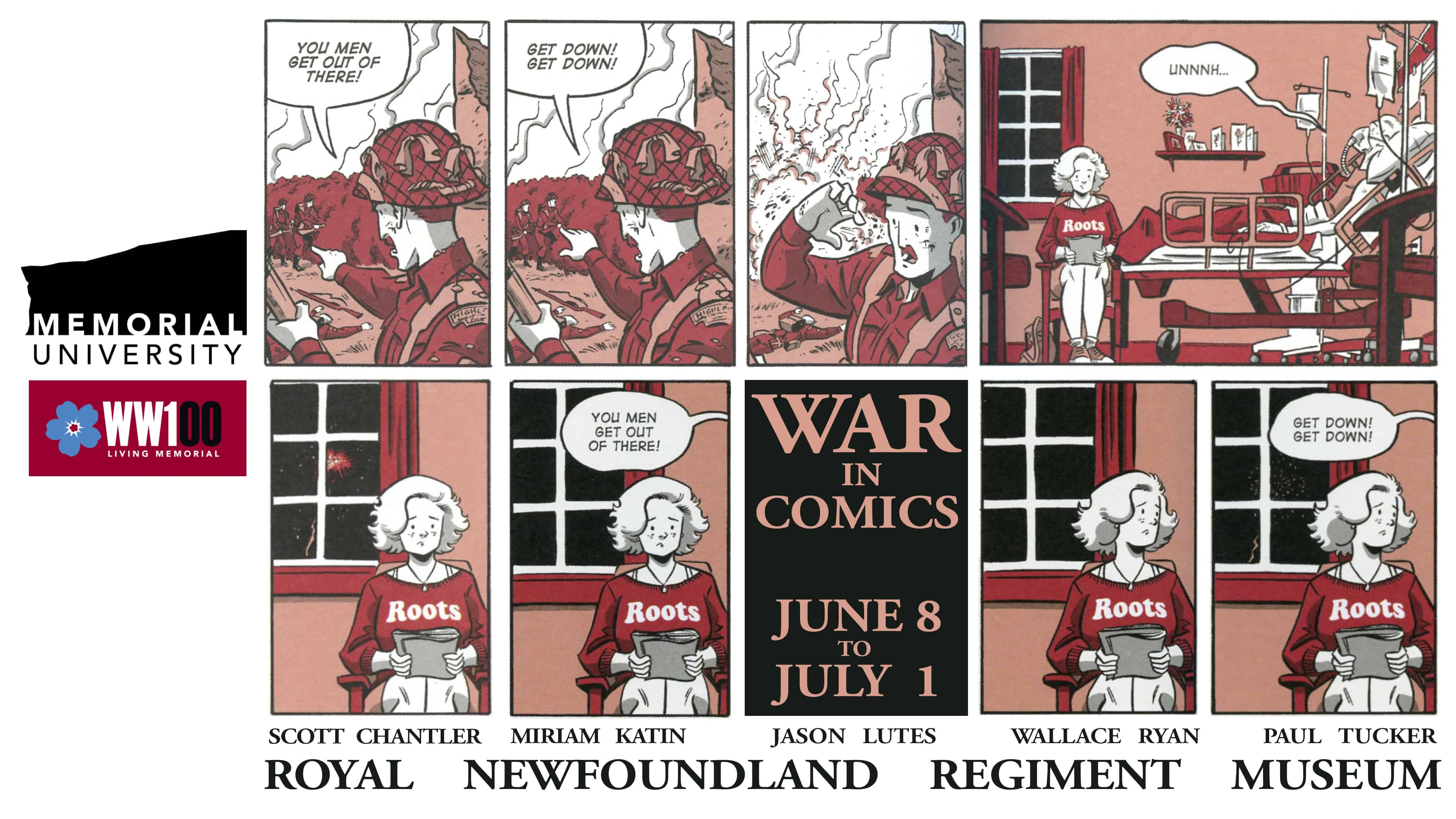 ‘The opportunity to move toward prosperity’: Gerry Rogers