The Modern Shoe Hospital has been located at 244 Duckworth Street since 1951 when Kevin Wright’s father and his uncle moved into the workspace.

“The shop’s been pretty much steady go ever since,” says Wright.

Kevin remembers working in the shop as a young man, alongside his father, on the weekends and before and after classes while attending university. He now works alongside his own son, Adam, and Jim Way, whose own father worked with Wright’s years ago.

It is very much a traditional family business with generations reaching back to the 1920s, when Wright’s great uncles opened the first Modern Shoe Hospital on Water Street after learning the trade in Montreal.

The front-of-shop window area and counter are overshadowed by the footwear towering up the back wall. Many customers of the shoe doctor’s can’t help but peer and covet the shoes: a particularly smart pair of men’s dress shoes…beautiful brown women’s ankle boots, resoled and refinished. Although, it’s the actual cobbling workspace through the open doorway that is even more visually fascinating.

The space itself retains decades of charm, though it did undergo an expansion of approximately 300 square feet in the early ’60s to meet the increasing demand.

Tools of the trade

Friendly and soft-spoken, Wright remembers how the equipment posed a number of spacial challenges. Certain machines essential to the trade were extremely large, with one finisher taking up an entire wall. The machines eventually were made smaller and more efficient to meet space requirements, as businesses changed and moved into smaller spaces in malls.

“These machines are irreplaceable — you need that type of equipment to work on footwear.”

Wright muses that you would be hard-pressed to get a new version of the Goodyear welt stitcher for less than $20,000.

Impressive larger machines include sole stitchers, a welt roller and cutter, a dole extracter and sewing machines. To purchase any of this equipment new would be quite expensive, as one sewing machine can cost up to $10,000. Wright muses that you would be hard-pressed to get a new version of the Goodyear welt stitcher for less than $20,000.

This is not to mention the fact that each stitcher weighs about a 1000 pounds. Wright laughs when asked how they manage to move these machines if needed.

“With great difficulty. You’d have to get it up and get in on rollers. Hard-pressed to manage that with one person. Minimum two people for sure.”

As a result, they don’t often move things around, though Wright feels this is fine since they are currently in their optimum positions for the space. All three men can effectively work without interfering with one another’s individual work stations in the space.

“It’s kinda cozy, you’re kinda close-knit. It gets kinda loud sometimes with machinery going but you can manage to talk over it.”

Wright mentions that these days many manufacturers make shoes that aren’t built to be repaired — just replaced — and that it’s important people know the signs of quality footwear.

“It’s frustrating because you see people come in and it’s kind of hard to turn them away ’cause you can’t fix their shoes — because they weren’t designed to be fixed — but unfortunately that’s what’s going on.” 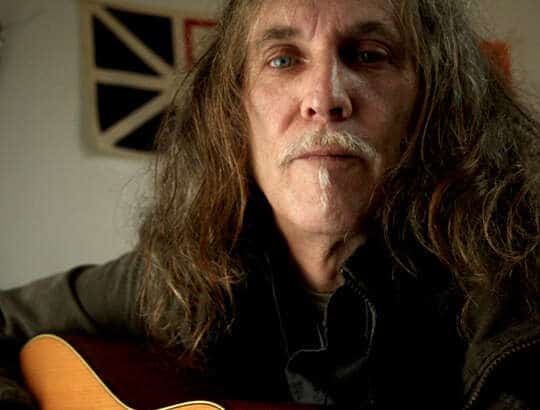 Like a drunkard on a spree
John Cossar makes a go of it as a singer-songwriter, at the age of 60